BANGKOK -- SAIC Motor has started up a major vehicle factory in Thailand, a first for a big Chinese automaker, seeking to stake a claim in a Japanese-dominated market as well as export to other Southeast Asian countries.

The plant can build an annual 100,000 MG brand passenger vehicles. Though SAIC Motor-CP previously estimated the facility's annual capacity at 200,000 units, the goal for now is to make full use of the lower initial capacity. The company has closed a temporary factory that had been making about 10,000 vehicles a year and shifted all production to the new facility. 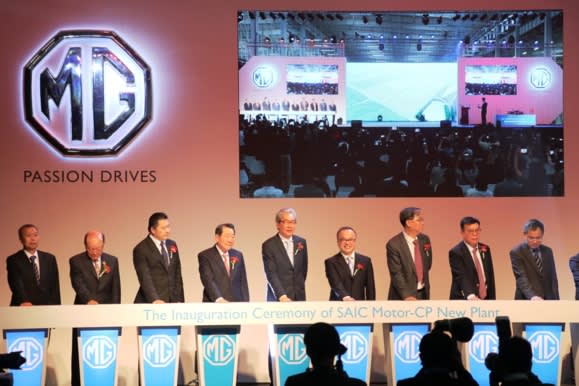 "The opening of the new plant and commencement of the production line will serve as a new beginning for the growth of the MG brand in Thailand," SAIC Motor-CP President Shi Guoyong said in a news release last month. "It will also help SAIC Motor-CP enjoy stronger growth than before."

The automaker showed part of the facility to the media in December at an opening ceremony attended by such VIPs as economic czar and Deputy Prime Minister Somkid Jatusripitak and Dhanin Chearavanont, former executive chairman of CP Group.

Reporters entering the factory were greeted by the sight of MG3 compacts moving along a production line. As the red frames traveled overhead, workers reached up to attach parts to their undersides.

The line moved at a crawl, and workers were scarce on the factory floor, possibly because the day's work was just for demonstration. A striking amount of empty space was visible as well. This did not seem like a plant able to roll out 100,000 cars a year. Given that only about 10,000 MG vehicles were sold in Thailand between January and October, the factory may operate at well below full capacity. Yellow MG3s were lined up on the final inspection line. Fluorescent lights shone on them from every angle as workers carefully examined each for scratches or dents. This section had a markedly high number of female workers.

Exports will be key to the plant's success. SAIC Motor-CP expects to begin shipping vehicles elsewhere in the Association of Southeast Asian Nations as early as this year. "We want to make SAIC Motor-CP a world-class production hub for right-hand-drive MG vehicles in Thailand and ASEAN," Shi said in the news release.

Breaking into the market will be the automaker's biggest challenge. Some 3.3 million vehicles are sold a year in ASEAN, putting the region between the U.K. and Germany in market size. But Japanese automakers account for more than 80% of this figure. Though CP Group's backing has boosted the MG brand's profile in Thailand, it remains virtually unknown in other ASEAN countries.

Whether the 10 billion baht investment pays off will depend on SAIC Motor-CP's ability to successfully market the MG brand to ASEAN consumers as an alternative to better-known Japanese names. The new plant, which will determine the quality of the automaker's offerings, has a vital role to play.