SINGAPORE - State-backed developer CapitaLand on Tuesday said it was seeking more opportunities outside Singapore and China, where it may divest of more assets as it restructures its portfolio.

"We look at CapitaLand now as a global real estate platform," Group CEO Lim Ming Yan said during a quarterly earnings briefing. "It is not just focusing on China or Singapore."

"These are two important markets, but the focus on the ambition is you need to look at global opportunities," he stressed.

Singapore and China, including Hong Kong, account for about 80% of the total revenue, according to the latest financial results released on Tuesday.

The company is targeting markets such as Indonesia, Japan, the U.S. and Europe, the CEO said. 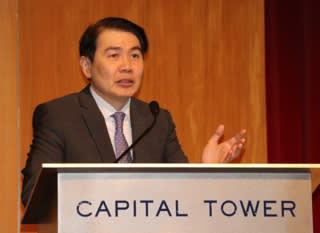 Lim said China still offers "a lot of opportunities" and the company "will continue to deploy capital there." But for certain properties, Lim said, divestment is "possible." The company will be "recycling" the capital by selling existing properties and reinvesting in other assets, he added.

Tuesday's remarks came after the company in January announced a divestment of 20 shopping malls in 19 cities in China to focus on bigger cities like Shanghai, as competition among malls and with e-commerce became more intense.

Lim said CapitaLand is likely to keep the remaining 49 properties in the long term. "Most of properties we have now are properties that we consider as a dominant shopping mall in the right cities that we want to focus on."

The company says it is aiming to increase the assets under its management to 100 billion Singapore dollars ($75 billion) by 2020 from S$88.8 billion at the end of 2017. Its assets in China made nearly half its total at 47% although Lim said that the figure could fall with further divestments.

But Andy Wong, an analyst at OCBC Investment Research, said that CapitaLand will remain focused on China. He said the company's divestment in China is a "strategic approach to optimize its portfolio." He added that "management continues to believe that there are good opportunities in China."

The latest financial results revealed that its revenue from China dropped 33% to S$1.77 billion. Revenue from its Singapore assets, on the other hand, grew by 6% to S$1.78 billion. In terms of earnings before interest and tax, Singapore's share surged by 75% to S$1.42 billion, surpassing China's S$1.30 billion that marked a 13% increase.

The company attributed the fall in its China business to lower handover of properties and that some were sold but not recognized in the quarter. Its quarterly net profit fell by 38% on the year to S$267 million.