JAKARTA -- A commodities rebound, record profits and cozy ties with the government is not stopping Kartika Wirjoatmodjo, the chief of Indonesia's largest bank by assets, from hunting for new customers.

His latest target is: rich Indonesians who have their wealth stashed in Singapore.

"We are in the process of getting a license upgrade in Singapore to tap into individual wealth management," Wirjoatmodjo, president of Bank Mandiri, told the Nikkei Asian Review in a recent interview. "In March, we would like to start launching our offshore investment service."

The foray will test whether Mandiri, which was born from the ashes of the 1997-98 Asian financial crisis, can grow out of its comfort zone at home. On Feb. 6, the state-owned lender posted a 49% increase in net profit for 2017 after suffering its first profit decline in more than a decade a year earlier. But with growing competition from foreign lenders and Indonesia's improving reputation, its lucrative corporate lending business is unlikely to return to its go-go years.

With offices in only seven countries and regions outside Indonesia, Mandiri's overseas presence pales in comparison to its regional peers, especially Singaporean lenders such as DBS Group Holdings, Overseas-Chinese Banking Corp., and United Overseas Bank. But for Wirjoatmodjo, cracking the Singapore market will be the real game changer.

Indonesians declared more than 750 trillion rupiah ($52.5 billion) worth of assets in Singapore during Indonesia's tax amnesty program -- which gave immunity from prosecution to those who came clean about untaxed wealth and paid a small penalty -- ended last March. That is more than the next four top destinations -- British Virgin Islands, Hong Kong, Cayman Islands and Australia -- combined. It is also larger than Mandiri's loan book, which stood at 729.5 trillion rupiah in December.

"We would like to start by tapping into our client, because we know that our client have offshore investment as well," Wirjoatmodjo said. "In the next 2-3 years, we will still focus on that segment. It is a large segment."

While Mandiri's expansion plans elsewhere in the region has been delayed, Wirjoatmodjo has been making steady gains in Singapore. Mandiri's brokerage arm officially began operations in the city state last year after it was granted a securities license. The move enabled it to become a bookrunner for a string of Indonesian companies tapping the global bond market, such as a $200 million issuance by palm oil producer Tunas Baru Lampung in January. 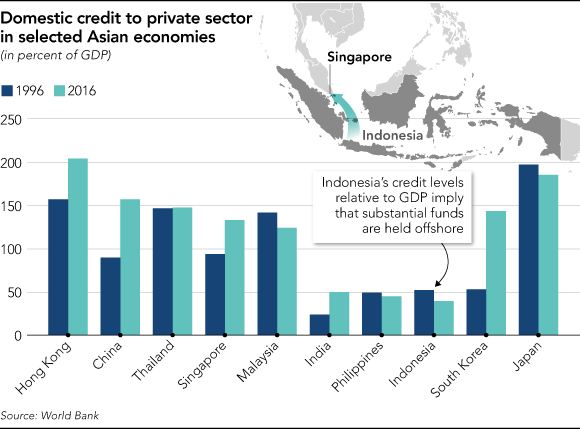 Indonesians have taken advantage of Singapore's proximity, stable financial market and its lower tax rates, especially after the Asian financial crisis. Indonesia's private sector debt is only equal to 39% of gross domestic product -- the lowest ratio among the top five countries in the Association of Southeast Asian Nations, according to the World Bank. The figure has declined from 52% in 1996, before the financial crisis. In the same period, Singapore's private-sector debt has risen from 94% to 133%. That imbalance has capped the growth of Mandiri, which is Indonesia's biggest bank by assets but ranks 10th in Southeast Asia.

The tailwind is a global tax crackdown. Indonesian officials have accused local tycoons of tax avoidance by hiding their ownership using shell companies and trusts. Last year, financial regulators of Indonesia and Singapore finally agreed to share financial account data as part of the Automatic Exchange of Information, a global framework for sharing tax information developed by the Organization for Economic Cooperation and Development. It is expected to be implemented as early as this year.

Mandiri's hunt for new assets also comes at a time when Indonesia's banking market is entering a new wave of consolidation.

"I'm cautiously optimistic about our approval beyond 40%," Takayoshi Futae, chief executive officer for Asia & Oceania at Bank of Tokyo-Mitsubishi UFJ, said at a press conference in Jakarta on Dec. 27. The Japanese megabank had just announced its intention to acquire a stake of up to 73.8% in Bank Danamon, the country's sixth-largest lender by assets. The deal is considered a breakthrough after the central bank introduced a 40% cap in foreign ownership of Indonesian banks in 2012.

While BTMU's acquisition plan has yet to be officially approved by regulators, the outlook seems promising. Since 2015, Chinese and South Korean banks have successfully taken majority ownership in small Indonesian banks. Industry observers say regulators have become more open to the idea of using foreign banks as a driver to consolidate the banking sector after seeing the level of nonperforming assets creep up over the past few years.

Wirjoatmodjo said acquisitions are "always an opportunity" for Mandiri, but the high prices that foreign banks, which have access to cheaper capital, are willing to pay make deals harder to pursue. "Foreign investors particularly in Japan, which has negative interest rates ... will be able to bid with a very high price to book value." He said Mandiri will search for a bank with a strong customer base in a niche market, such as small trading businesses in the ethnic-Chinese community. "We don't want a bank that has an entirely same business with us."

With a rebound in commodity prices slowly improving Indonesia's economic conditions, lenders have already began lending aggressively to healthy companies, causing interest rates to fall. Mandiri's net interest margin -- the difference between lending and borrowing rates -- dropped 0.57 percentage points to 5.87% in 2017. In an analyst call last week, Wirjoatmodjo said the figure is unlikely to pick up this year.

"In 2018, we hope we can manage [interest rates] in a more smoother way and the cost of fund better," said Wirjoatmodjo. "That will create platform for stronger growth."