TOKYO -- Artificial intelligence could scale new heights on its growing application in Southeast Asia, thanks to the region's relative openness to data collection.

Watson lets doctors make unbiased decisions on the best options, according to James Miser, Bumrungrad's chief medical information officer. The Thai hospital has consulted with Watson in treating breast, colon, lung and prostate cancer in about 50 patients so far and intends to expand its use.

Miser said it will take some more time to determine whether Watson leads to better treatment. But he is positive that the system has increased efficiency, since doctors no longer need to pore over the research themselves and can focus on treatment instead. Half of Bumrungrad's patients are foreign, and Miser hopes that Watson will help attract even more from Thailand and elsewhere.

IBM opened a new Watson Center in Singapore this June amid growing hopes for AI's applications in Southeast Asia. The facility acts as a center of expertise for nearly 5,000 information specialists across the Asia-Pacific region and supports local businesses looking to develop AI-related products and services. 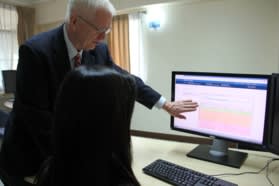 Singapore's DBS Bank has begun offering an asset management and advisory service geared toward the wealthy based on financial analysis by Watson. The DBS Group Holdings unit has also set up a specialized team at the Watson Center in order to develop a new financial technology service.

AI and big data are enjoying rapid growth in Southeast Asia, partly on the region's higher tolerance for data collection than Japan, the U.S. and Europe. Singapore has given private-sector companies access to surveillance camera footage, public transportation usage records and other information in an effort to address such issues as traffic congestion.

Data collection and feedback make AI smarter. As the business hub for the 600-million-strong Southeast Asian market, Singapore is at the heart of the exchange of people and ideas, making it the perfect location for IBM's new Watson base.

Other companies are looking to Southeast Asia as well. Leading Chinese search provider Baidu set up a joint laboratory in 2012 with an institute under Singapore's Agency for Science, Technology and Research, or A*Star. The lab is developing automatic translators and voice recognition systems for languages including Thai, and Baidu has begun incorporating this technology into its offerings.

There have been moves to use AI and big-data technology to bolster the region's social infrastructure. Southeast Asian countries face many issues, including traffic and pollution from rapid urbanization. Japan's Fujitsu launched a joint project with A*Star and Singapore Management University in 2014 to use big data to alleviate crowding on public transportation, among other problems. A*Star Chairman Lim Chuan Poh has said the government will provide any data they need for the project.

Public pressure could eventually curb private-sector access to government-managed data. But AI and big data still have a big role to play in developing social infrastructure in Southeast Asia, possibly allowing the technology to become even smarter than it could have in developed economies alone.