ANTWERP, Belgium/BERLIN/GDANSK, Poland -- Southeast Asia has become a magnet for multinationals. But as the big boys of global business move in to invest, the region's own corporate powers are heading out to make international names for themselves. Companies from the Association of Southeast Asian Nations are swallowing up assets in the West and elsewhere. They are in a rush: The launch of the ASEAN Economic Community at the end of this year will create a massive common market, bringing new opportunities but also harsher competition. Only the strong will survive.

Machinery hums as small packages filled with boiled pasta and Bolognese sauce are carried along a production line. The scent of tomatoes fills the air. The factory in Olen, just outside the Belgian city of Antwerp, churns out 100,000 ready-to-eat meals a day, all with just seven workers per shift. A patented microwave method sterilizes the meals five times faster than conventional retort sterilization. Packages of ready-made spaghetti Bolognese are carried along the production line at Tops Foods' plant in Olen, Belgium. (Photo by Yukako Ono)

In January 2014, Charoen Pokphand Foods, the group's core food subsidiary, bought an 80% stake in Tops Foods, the Belgian company that runs the Olen plant. CP wants to bring the technology to Asia, where demand for ready-made food is high and households tend to have limited space in their refrigerators. Tops Foods' meals can be kept for up to 12 months at room temperature.

The Olen facility also gives CP a model for automating its Asian factories.

Southeast Asia was once chiefly a source of low-cost labor for multinational companies, noted Pavida Pananond, associate professor of international business at Thailand's Thammasat Business School. Now, she said, the region's large companies are heading abroad to make investments of their own. They are extending their reach, she said, to access "new markets, brands and absorb technologies."

Economic woes in the U.S. and Europe have opened doors for mergers and acquisitions. Many Western companies have embraced Asian suitors to tap their financial resources.

CP's acquisition proposal was a welcome surprise for Tops Foods. Since its establishment in 1993, the Belgian company had been supplying European supermarkets and airlines, but it wanted to reach consumers directly. "We have unique technology, but we never had the financial means to expand," Managing Director Michel Tops said. "Creating a brand requires a lot of financial power."

CP shares Tops' vision. The Thai conglomerate, which has supplied European retailers with chicken and seafood for years, has started courting the region's consumers with its own brands. One of them, a ready-to-eat line of burgers called Taste Inc., hit stores in 2013. Just 12 months later, the brand controlled 14% of the U.K. microwaveable snacks market, putting it in second place behind Ireland's Rustlers. 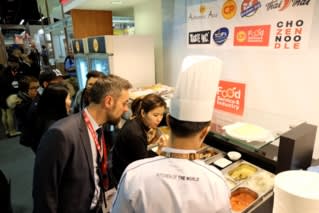 A CP Foods chef explains the company's curry products at Anuga 2015, one of the world's largest food trade fairs, in Cologne, Germany. (Photo by Yukako Ono)

"Previously, there was not much choice for consumers," said Chris Wenham, managing director at CP Foods (UK). There were few snacks to zap in the microwave besides beef burgers, he said, noting that these appealed mainly to men in the 16-24 age bracket.

CP, which runs the world's third-largest chain of 7-Eleven convenience stores in Thailand, knows a thing or two about selling microwaveable snacks. It broke into the British market by offering a wider selection -- including chicken, fish and prawn burgers. In doing so, it won over women, too.

Local producers "didn't look outside of their box," Wenham said.

Taste Inc. is expanding outside the U.K. -- in Belgium in November, and on to Australia next year. As for Tops Foods, it has released a series of Thai specialties under CP's European brands. These include curry with Thailand's long-grain jasmine rice, at Dhanin's request.

CP Foods showcased its product lineup at a 150-sq.-meter booth at Anuga, one of the world's largest food fairs, in Germany in mid-October. CEO Adirek Sripratak expressed confidence in the company's technology and recipes, which he said could set "the world standard." He added "A strong brand will lead to long-term trust" among consumers.

Expansion stories can be found across Southeast Asia. In 2014, M&A deals executed by ASEAN companies outside the region more than tripled from 2005 to $53.473 billion, according to Dealogic. Singapore was the largest acquirer, striking 249 deals, followed by Malaysia, the Philippines and Thailand. In Thailand alone, central bank data shows that outbound foreign direct investment exceeded incoming FDI in 2010.

Singapore Post recently acquired a pair of U.S. logistics companies, positioning itself as a bridge for Western brands looking to sell products online in Asia. "With Asia-Pacific and the U.S., we now cover two-thirds of the global e-commerce market," said Wolfgang Baier, SingPost's chief executive.

Some companies that ventured abroad early are embarking on new, more ambitious endeavors. Jollibee Foods, the Philippines' largest fast-food chain, built an international presence by catering to the nearly 10 million Filipino expats employed abroad. But with brighter economic prospects drawing some of those workers home, Jollibee hopes to broaden its customer base. In October, the company agreed to acquire 40% of Smashburger, based in the U.S. state of Colorado, for $99 million.

America's huge fast-food market accounts for just 5% of Jollibee's overall revenue. The company aims to start changing that through Smashburger, which has more than 300 U.S. branches. Sardines are sorted by size at King Oscar's plant in Gdansk, Poland. Thai Union acquired the company in 2014. (Photo by Yukako Ono)

Thai Union Group, the world's largest canned tuna processor, went abroad in 1997, when it acquired U.S. canned seafood company Chicken of the Sea. Since then, it has bought over a dozen brands, most of them focused on canned tuna. Overseas operations account for more than 90% of its revenue.

Its acquisition strategy, however, is no longer tuna-centric. In late 2014, Thai Union purchased France's MerAlliance, a private-label supplier of smoked salmon. MerAlliance's expertise in chilled logistics may have been the big prize. Since smoked salmon and fresh products have shorter shelf lives than canned goods, speed is essential. The French company runs its own logistics network: 85% of the sales volume passes through its logistics center in France, shipping directly to retailers across the region. Products hit stores within 48 hours after leaving the factory.

Thai Union in 2014 also landed King Oscar, a 113-year-old sardine brand. King Oscar's red cans, which feature a portrait of the 19th-century Norwegian king the brand is named after, are a familiar sight in Europe and the U.S. But the acquisition was about more than brand power.

Headquartered in Norway, King Oscar's main plant is in Gdansk, on the northern coast of Poland. The minimum monthly wage in the country is 418 euros ($461), less than one-third of the figures in France and the U.K, according to Eurostat.

"We probably have one of the cheapest manufacturing [setups] in Thai Union," King Oscar CEO Geir-Arne Asnes said. The plant, with a skilled workforce of more than 500, is set to begin producing John West canned tuna -- a Thai Union brand sold in the U.K.

King Oscar is but one venerable Western asset acquired by a Southeast Asian company in recent years.

"Our tour guide told us that this is Berlin's answer to London's Harrods," a Canadian couple in their 50s said at Kaufhaus des Westens, or KaDeWe, a century-old department store in the heart of the German capital. Central Group, the Thai retail conglomerate, bought a controlling interest in operator KaDeWe Group earlier this year.

In this day and age, department stores may seem like odd acquisition targets. They face stiff competition from fast-fashion brands such as H&M and Uniqlo, which continue to open stores one after another. Many consumers prefer to shop online.

But Central has thought this through. Radice suggests thinking of department stores as landmarks. If you get people in the door, they "will buy your products as a souvenir," he said. "That's why we want a collection of historic department stores in the big European cities."

Following La Rinascente, the group in 2013 snapped up Denmark's Illum, established in 1891. Now Central has added KaDeWe Group, which has a total of three century-old stores in Germany, to its empire.

Central is backed by Thailand's Chirathivat family, which is providing the new stores with the cash they need. Some 400 million euros are earmarked for renovating the three German additions. Though some critics have called the deals "trophy acquisitions" that promise few synergies, there are signs of cooperation between the stores. The group plans to consolidate its customer loyalty programs. KaDeWe hopes to tap into Central's data on Thai and Chinese consumers, who are increasingly visiting its stores. And Central aims to capitalize on new fashion trends identified by its European units.

While making inroads into advanced Western markets, Southeast Asian companies are also targeting Middle Eastern and African economies that are expected to flourish in the future.

Indofood Sukses Makmur, the core food business of Indonesian conglomerate Salim Group, started production of instant noodles in Saudi Arabia in the mid-1990s. Since then, it has set up production facilities in Syria, Egypt, Nigeria and Kenya.

In Oman, Thailand's Dusit International is to open a hotel in the country's largest shopping complex, scheduled for completion in 2017. The Middle Eastern country boasts a diverse landscape, from mountains to beaches. A second airport, to be completed next year, is expected to make it an even more attractive tourist destination.

The mall is being developed by Oman's Al Jarwani Group. It will house a 14-screen cinema, an aquarium and a snow park, following the example of Dubai's luxurious shopping centers. A number of Western hotel chains expressed interest in joining the project, but Al Jarwani chose Dusit. "I like Asian hospitality," Chairman Mahmood Mohamed Al Jarwani said. "It feels closer to the Omani culture." He added that many Omanis go to Thailand for medical tourism. 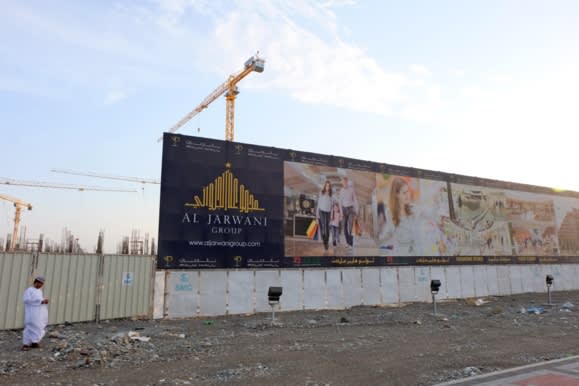 Thailand's Dusit International is to open a hotel at Oman's largest shopping complex, scheduled for completion in 2017. (Photo by Yukako Ono)

Delta Electronics (Thailand), meanwhile, finds itself in a unique position.

Anusorn Muttaraid, Delta Thailand's executive director in charge of international expansion, explained that as a Taiwan-based company, it faces "limitations" when it comes to investing abroad. Largely due to China's insistence that the island is part of its territory, Taiwan lags behind in forging economic partnerships.

The Thai unit, on the other hand, can benefit from Thailand's trade pacts with other countries, making it an ideal springboard for Delta's global expansion.

Nikkei staff writers Mayuko Tani and Tomomi Kikuchi in Singapore, Wataru Suzuki in Jakarta and Cliff Venzon in Manila contributed to this story.