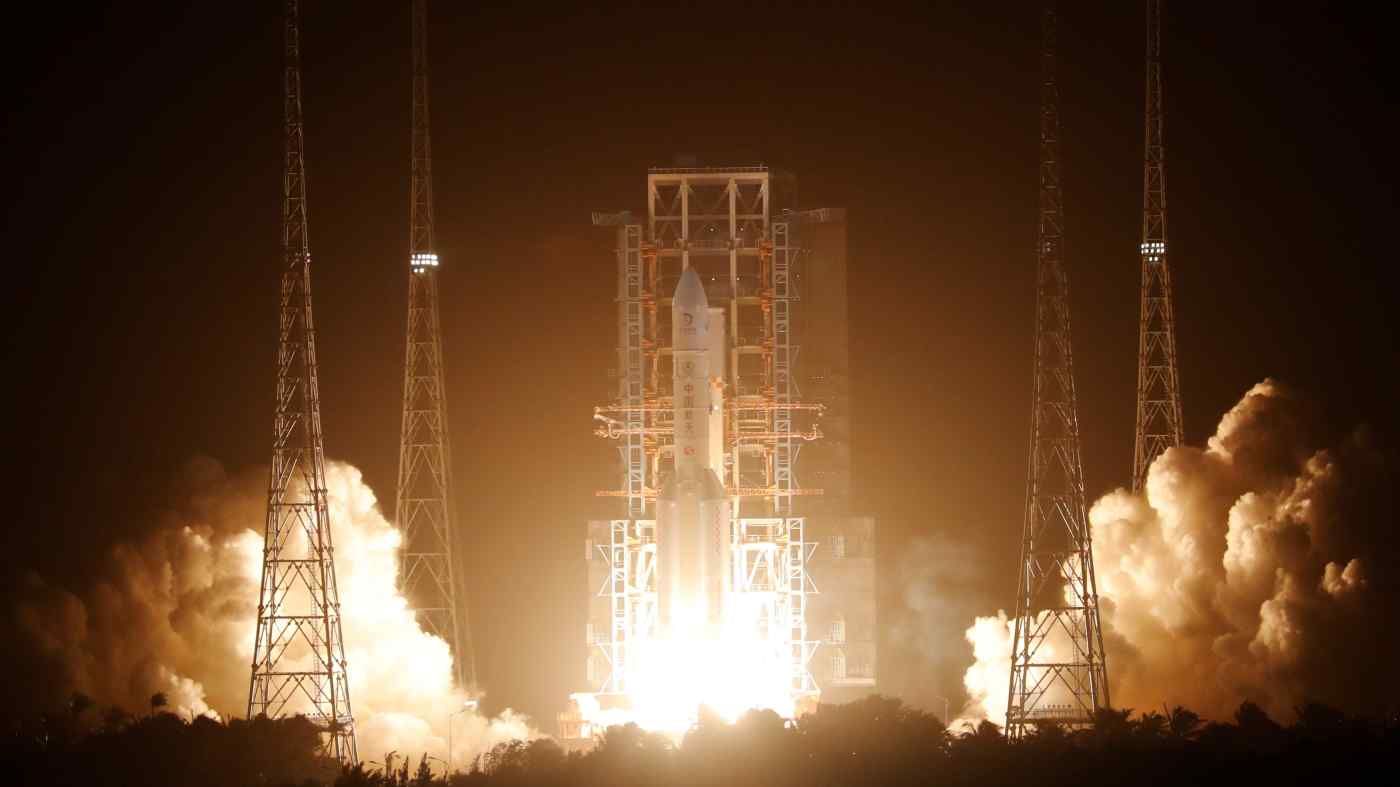 WENCHANG, China (Reuters) -- China hailed as a success its pre-dawn launch on Tuesday of a robotic spacecraft to bring back rocks from the moon in the first bid by any country to retrieve lunar surface samples since the 1970s, a mission underscoring Chinese ambitions in space.

The Long March-5, China's largest carrier rocket, blasted off at 4:30 a.m. Beijing time (2030 GMT on Monday) in a launch from Wenchang Space Launch Center on the southern Chinese island of Hainan carrying the Chang'e-5 spacecraft.

The China National Space Administration (CNSA) called the launch a success and said in a statement that the rocket flew for nearly 37 minutes before sending the spacecraft on its intended trajectory.

The Chang'e-5 mission, named after the ancient Chinese goddess of the moon, will seek to collect lunar material to help scientists understand more about the moon's origins and formation. The mission will test China's ability to remotely acquire samples from space, ahead of more complex missions.

State broadcaster CCTV, which ran live coverage of the launch, showed images of CNSA staff in blue uniforms applauding and cheering as they watched the spacecraft climbing through the atmosphere, lighting up the night sky.

If the mission is completed as planned, it would make China only the third country to have retrieved lunar samples, joining the United States and the Soviet Union.

Upon entering the moon's orbit, the spacecraft is intended to deploy a pair of vehicles to the lunar surface: a lander and an ascender. The landing is due to take place in about eight days, according to Pei Zhaoyu, a spokesman for the mission. The probe is due to be on the lunar surface for about two days, while the entire mission is scheduled to take around 23 days.

The plan is for the lander to drill into the lunar surface, with a robotic arm scooping out soil and rocks. This material would be transferred to the ascender vehicle, which is due to carry it from the surface and then dock with an orbiting module.

The samples then would be transferred to a return capsule for the return trip to Earth, with a landing in China's Inner Mongolia region.

"The biggest challenges... are the sampling work on the lunar surface, take-off from the lunar surface, rendezvous and docking in the lunar orbit, as well as high-speed re-entry to Earth," said Pei, also director of the space administration's Lunar Exploration and Space Engineering Center.

"We can conduct sampling through circumlunar and moon -- landing exploration, but it is more intuitive to obtain samples to conduct scientific research -- the method is more direct," Pei added. "Plus, there will be more instruments and more methods to study them on Earth."

China, which last year carried out the first landing on the far side of the moon and in July of this year launched a robotic probe to Mars, has other space goals in its sights. It aims to have a permanent manned space station in service around 2022.

"From next year, we will carry out the launch mission of our national space station," said Qu Yiguang, deputy commander of the Long March-5 carrier rocket.

Asked when China was planning to put astronauts on the moon, Pei said any decision would be based on scientific needs, as well as technical and economic conditions, adding: "I think future lunar exploration activities should be carried out by a combination of man and machine."

Matt Siegler, a research scientist at the Arizona-based Planetary Science Institute who is not part of Chang'e-5 mission, said the Mons Rumker volcanic area of the moon where the spacecraft is due to land is 1-2 billion years old.

"That is very young for the moon - most of our samples are 3.5 billion years old or more," Siegler said in an email, noting that the area and other similar ones represented "late-stage volcanism" when the moon had enough internal heat for such activity.

"We want to find out what is special about these regions and why they remained warm longer than the rest of the moon," Siegler added.

The United States, which currently has plans to return astronauts to the moon by 2024, landed 12 astronauts there in its Apollo program over six flights from 1969 to 1972, and brought back 382 kg (842 pounds) of rocks and soil.

The Soviet Union deployed three successful robotic lunar sample-return missions in the 1970s. The last, the Luna 24, retrieved about 170 grams (6 ounces) of samples in 1976 from a region called Mare Crisium.