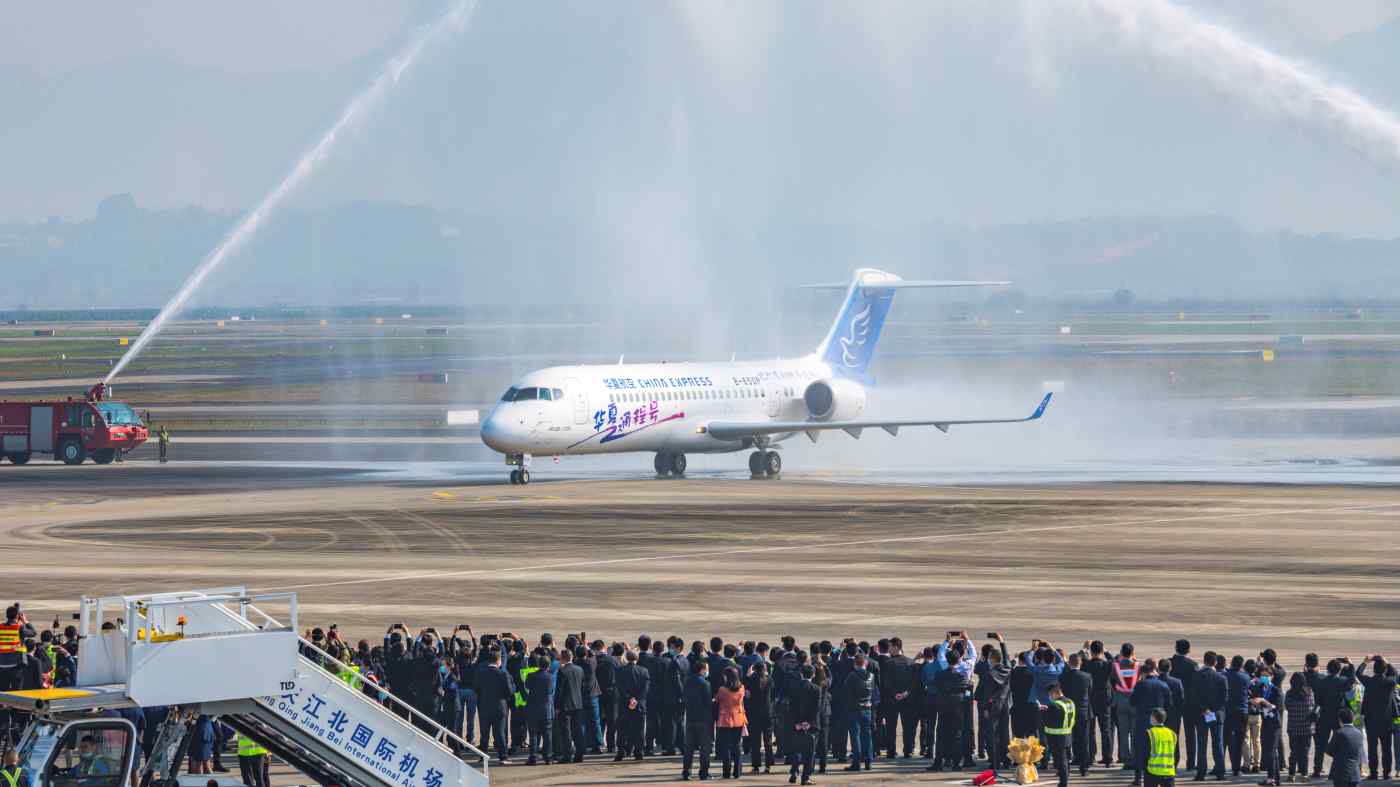 HONG KONG -- The inclusion of China's state-owned commercial jet maker on the Trump administration's latest sanction list could disrupt Beijing's plans to carve out a big piece of the lucrative industry for its homegrown champion, given the company's high dependence on U.S. suppliers.

Beijing's hopes of challenging the lock held by Boeing and Airbus on the large commercial jet market rest primarily on Commercial Aircraft Corp. of China, or COMAC.

With China forecast to be the biggest source of demand for such planes in the coming years, COMAC has been winning an increasing share of local orders for smaller jets with its ARJ21 model. But it is seeking to move into the mid-sized market with the C919, which is still undergoing flight tests.

The U.S. Department of Defense announced on Thursday that it would add COMAC, phone maker Xiaomi and seven other Chinese companies to an official list of companies judged to be linked to the Chinese military and thus meriting special scrutiny. Under an executive order signed last year by U.S. President Donald Trump, American investors must halt investing in such companies as of this week.

Unlike Xiaomi, COMAC is not a publicly traded company, so the investment ban will likely have limited direct impact, though the company has sold bonds domestically. The risk, though, is that the addition to the military list sets up COMAC's addition to the so-called entity list maintained by the U.S. Department of Commerce. That would then restrict American companies' ability to export products to the plane maker.

Referring to the odds that the latest military-linked companies will be added to the entity list, Edison Lee, an equity analyst at Jefferies in Hong Kong, compared their situation to that of Chinese oil company CNOOC, which the Commerce Department singled out on Thursday, 43 days after its inclusion on the military list.

"The risk looks high," Lee said, that Xiaomi and the others will follow the same path.

That would be a big problem for COMAC. The engines for its C919 are made by CFM International, a joint venture between General Electric and France's Safran. The ARJ21's engines come from Connecticut-based Pratt & Whitney.

On Friday, a regional spokeswoman for Pratt & Whitney referred questions about the impact of the U.S. Defense Department's move to parent company Raytheon Technologies. A Raytheon spokesperson said the company would look into the situation, while GE had not responded to Nikkei Asia by the time of this article's publication.

COMAC's website includes a number of other U.S. companies as "tier one" suppliers of key component systems, including Honeywell, B/E Aerospace, Donaldson, Moog and Parker Hannifin.

In its statement on Thursday about COMAC, the Pentagon said it was determined to highlight and counter China's "military-civil fusion development strategy," which supports the modernization of the People's Liberation Army through securing advanced technologies and expertise via private companies and universities. Though COMAC focuses on commercial aircraft, aviation technologies can often be redeployed for military purposes.

Stanley Chao, a veteran American consultant to the aviation industry, said on Friday that it was "common knowledge" in the industry that COMAC has military ties.

For Chao, who has connected a number of American "tier two" suppliers to COMAC over the years, "the damage has been done already in terms of technology transfer."

Chinese state companies "now have the basic foundation and the knowledge to do [manufacturing] on their own," he said, after years of absorbing knowledge from foreign partners and suppliers. He added that non-American companies are ready to step into any openings created by exiting U.S. suppliers.

COMAC is a strategically important company for Beijing. It was set up to fulfill the country's dream of building and producing proprietary mid-to-large-sized commercial jets, a sector dominated by the U.S. and Europe.

With the original approval given by the State Council in 2002, the company took off in 2008 with an investment by the State-owned Assets Supervision and Administration Commission and several other major large-scale state-owned enterprises, such as the Aviation Industry Corp. of China.

According to COMAC's latest annual report, published in April 2020, SASAC owns 52% of the company. The first nine months of 2020 were rough for COMAC, with its revenue down 35% from the same period a year earlier to 2.73 billion yuan ($422 million), while its net loss bloated by almost sixfold to 1.54 billion yuan.

Unlike Huawei Technologies, which was a major global player in telecommunications equipment and smartphones when it was added to the entity list, COMAC's sales have been overwhelmingly domestic. With the state controlling most of China's airline and jet leasing sectors, COMAC has been getting a steady stream of local orders for both the ARJ21 and C919.

China Aircraft Leasing Group Holdings, a subsidiary of state-owned China Everbright Group, last week ordered 60 ARJ21s as part of a plan to promote Chinese aircraft in Southeast Asia. According to research by Scott Kennedy of the Center for Strategic and International Studies in Washington, COMAC has received 1,065 orders for the C919 from 32 companies, all but two Chinese.

The Chinese airline industry is expected to order 8,725 jets with more than 50 passenger seats over the next 20 years, according to a COMAC projection from last November that valued those planes at about $1.3 trillion based on 2019 catalog prices.

Up for question is whether the incoming administration of U.S. President-elect Joe Biden will maintain the policy trajectory of blacklisting Chinese companies.

Chao expects the new administration to hold off adding COMAC to the entity list given that "a lot of American jobs" would be at risk.

"Too much future business is at stake, and the damage has already been done," he said.

Speaking more broadly about the latest Defense Department list additions, Jefferies' Lee said that whether a move to the entity list proceeds "will give us a good indication on what direction Biden's China policy will be heading."

"We are confident there will be some de-escalation of the China-U.S. tech war, with the U.S. likely moving more to technology-specific export restrictions, rather than company-specific (ones)," he said.