China steps up maritime activity with eye on post-pandemic order The Chinese aircraft carrier Liaoning departs from port at Dalian, Liaoning Province, in 2019. The vessel recently passed between Okinawa's main island and Miyakojima with a fleet for the first time on its way to and back from the Pacific Ocean.   © Reuters
TSUKASA HADANO and ALEX FANG, Nikkei staff writersMay 13, 2020 08:03 JST | China
CopyCopied

This marked the carrier group's first time sailing to and from the Pacific Ocean via the passage and was seen as yet another sign of China's stepped-up military activity in neighboring seas.

In addition to increased activity near the Japanese-administered Senkaku Islands, which China claims as the Diaoyu, Beijing is revising a law to enlist People's Armed Police Force personnel -- who number 700,000 to 800,000 -- in handling maritime disputes with foreign ships.

The moves each point to Beijing's ambitions to assert a stronger presence in the post-coronavirus world order.

This all comes when the U.S. Navy has recently experienced a rare power vacuum in the West Pacific and the South China Sea. Its closest two aircraft carriers were limited in their actions. The USS Ronald Reagan, forward-deployed to Yokosuka, Japan, just underwent months of annual maintenance but has been unable to assemble its full crew, owing to infections. The USS Theodore Roosevelt, which experienced a more serious outbreak after stopping in Vietnam, had to quickly move from the South China Sea to Guam for quarantine.

"There is concern that while countries are busy occupied with pandemic response, at a time of no U.S. aircraft carriers operational in the Pacific, China has moved its carrier from the East China Sea to the Pacific and then on to the South China Sea," said Tetsuo Kotani, professor of international relations at Japan's Meikai University.

"If infections spread within the U.S. military and the defense industry becomes unable to provide sufficient maintenance, China may consider it a power vacuum and move to alter the status quo in the Senkaku Islands and Spratly Islands and even with Taiwan," Kotani said. 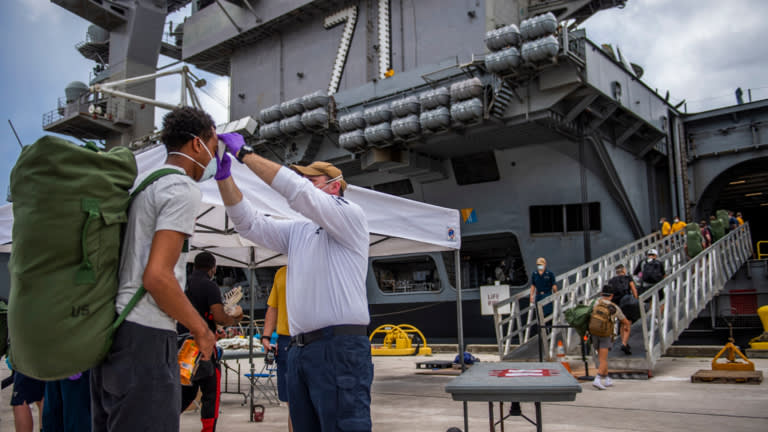 Sailors assigned to the aircraft carrier USS Theodore Roosevelt arrive pierside and prepare to reboard after completing their off-ship quarantine on May 1. (Photo courtesy of the U.S. Navy)

Armed Police members with special permits will be sent out to sea. The planned change will allow greater integration of the Armed Police and the Coast Guard, which was placed under the command of the People's Liberation Army in 2018.

The revision, the first in 11 years, could pass within the next few months.

China views the South China Sea as an important sea lane for energy imports from the Middle East. Increased military involvement in the waters could lead to scuffles with neighbors like Vietnam and Philippines, with which it has competing maritime claims.

With the National People's Congress kicking off its delayed annual session May 22, President Xi Jinping is eager to show that China has beat the coronavirus ahead of the rest of the world. Beijing could also bolster its presence in the East and South China seas while the U.S. is focused on containing the outbreak within its own borders. America has raised alarm over the recent developments. "The Chinese Communist Party must end its pattern of bullying Southeast Asians out of offshore oil, gas and fisheries," said Adm. John Aquilino, commander of the U.S. Pacific Fleet, in a news release Thursday. The fleet deployed a combat ship and a cargo ship to the South China Sea that day.

The U.S. military also conducted a rare two-day freedom-of-navigation operation in the South China Sea at the end of April.

"Our forces fly, sail and operate in the international waters of the South China Sea at our discretion and in accordance with maritime norms and international law," Rear Adm. Fred Kacher said in Thursday's release.

But the absence of aircraft carriers creates a gaping hole in the Navy's strategy.

"Ships have certain vulnerabilities, as we've seen, to this virus. So you start having ships that are more or less out of action because the crews are out of action," said Ian Williams, fellow in the International Security Program at the Washington-based Center for Strategic and International Studies.

"Then you would want to rely more heavily on land-based forces, where you can probably do better social distancing."

Additional reporting by Tstuyoshi Nagasawa in Washington and Ken Moriyasu in New York.