Japanese and Singaporeans refuse to surrender their 'highly strategic' ambitions 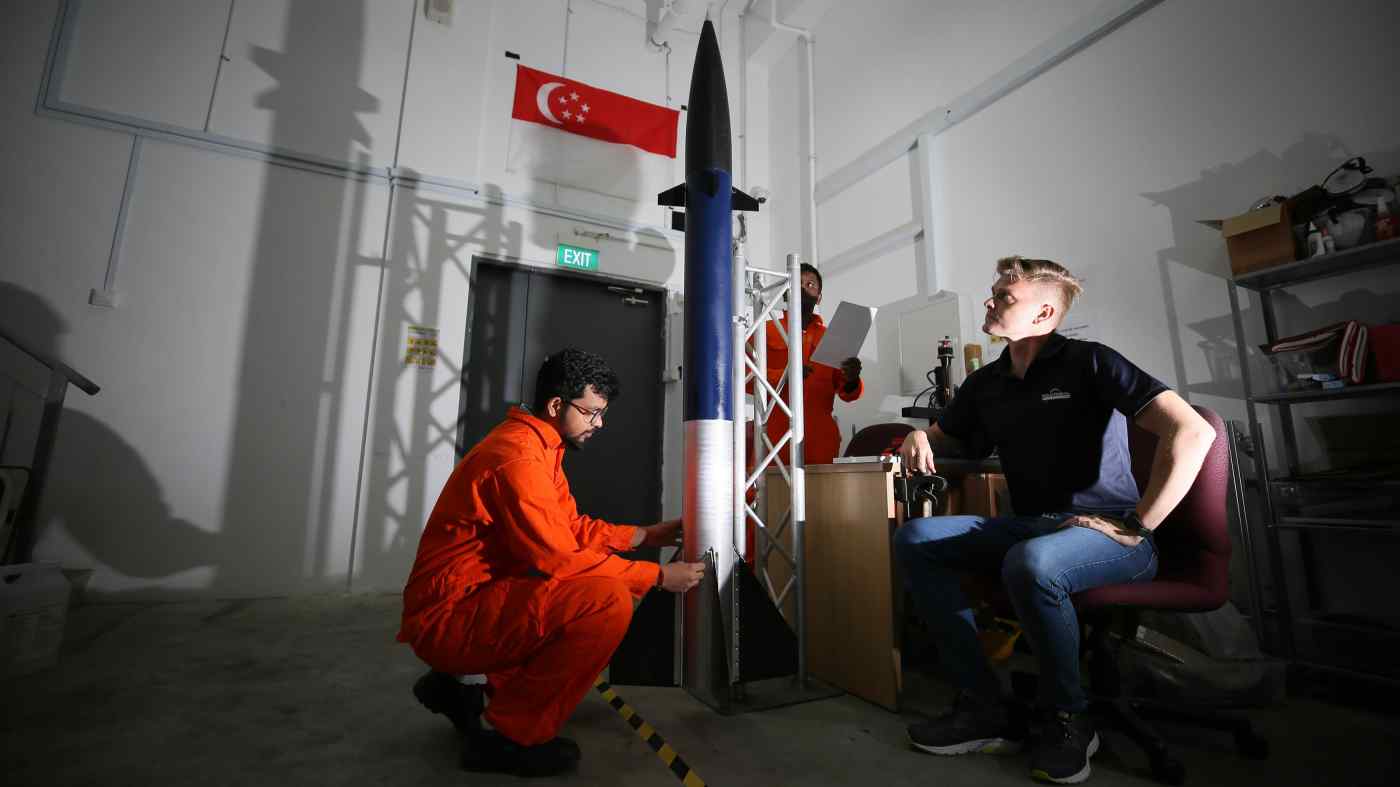 TOKYO/SINGAPORE -- Interstellar Technologies, a Japanese startup, was primed to test-launch its demonstration rocket on May 2. But less than four days before the countdown, the project was abruptly blocked by a town in Hokkaido, northern Japan, which cited coronavirus concerns.

It was the latest example of the challenges space startups face as pressure mounts for them to prove their worth amid the worst global economic meltdown since the Great Depression.

The Hokkaido-based company says it has yet to work out a new launch date, which could be months or even a year away. The delay not only pushes back the company's plan to develop a commercial rocket but puts a severe strain on its cash position. The town's mayor says the launch was opposed by farmers who feared the rocket would draw a crowd of people who could bring the virus to their community.

"This will have a big impact on a small venture company like ours," President Takahiro Inagawa said during a press conference, adding that the company will immediately start a crowd-funding campaign.

Other startups are also encountering roadblocks as they strive to prove their worth. On April 20, Japanese shooting star company Ale said it will delay its artificial meteor shower service three years till 2023 because of a satellite glitch. Outside Japan, major satellite internet service provider OneWeb went bankrupt on March 27.

"The knock-on effect of OneWeb's bankruptcy is likely a broader reduction in investor appetite for investing in high-risk, capital-intensive start-ups," said Manny Shar, an analyst at Bryce Space and Technology, a global space consultancy. "[They will] likely have an impact on many of the small launch vehicles under development looking to raise funding.

"[The] coronavirus is likely to focus investors' attention on keeping their existing portfolio companies going and investing in less risky companies, particularly those demonstrating revenue generation, a sustainable business model, and having less capital-intensive requirements." Building a launch vehicle is a dream of engineers in many countries. (Photo by Akira Kodaka)

Interstellar's latest setback follows a delay in January and a failure in July. The startup succeeded in conducting a suborbital flight a year ago, making itself the first non-American private company to reach space, according to the company. But it has a long way to go before it can convince customers that its rockets are reliable, not just cheap.

"We are at a critical juncture of whether we'll be able to transition from an experimental program to a real business," Interstellar's Inagawa said.

The company, which is trying to become the world's cheapest rocket launcher, is working on a 22-meter rocket capable of taking 100-kg payloads into a low-earth orbit for about $5 million, according to people familiar with the matter. This compares to an estimated $6 million charged by Rocket Lab, an American startup. The service was expected to begin in 2023.

The startup says its rockets are mostly made in-house and are little affected by the coronavirus's disruptions to global supply chains.

Another Japanese launch startup is building a launch site off the central coast and aims to start service for payloads of 150-250 kg next year. SpaceOne is partly owned by IHI Aerospace, a longtime maker of solid-fuel rockets. "Marubeni will continue to pursue an expansion of the small satellite business," a spokesperson said. The coronavirus crisis "may temporarily weaken demand for small commercial satellites, but we don't think it will have a major impact on potential demand."

Marubeni partnered with Interstellar in 2016, when the idea of commercial space development was about to take off. The trading house agreed to provide marketing support and research funding for the company, in exchange for stock warrants. In November, Marubeni exercised some of those warrants, injecting capital and formally becoming a shareholder.

Interstellar earns a small amount of revenue from its suborbital launch business. Its 10-meter suborbital vehicle carries scientific instruments for a university, and its body is adorned with several advertisements. But more substantial revenue will have to wait for a commercial satellite launch in 2023.

Marubeni acknowledges this is an unusually long-term investment for the trading house.

"We hope to see Interstellar gain more customer trust with more launches," said Kaz Yoshida, who was the head of the trading house's space division, adding that he's looking forward to the day when Marubeni receives a dividend payment.

Interstellar's main targets are operators of imaging satellite constellations, which are considered less risky and less capital intensive than telecommunication constellations, such as OneWeb's, because they can start generating revenue with just one satellite.

Thanks to technological progress, it is now possible to produce a powerful imaging satellite for several million dollars. Companies and government agencies that need satellite imagery are now looking for a launch service that doesn't cost much more than the satellite itself.

These satellites have myriad uses, from conducting reconnaissance over disputed waters in the South China Sea to monitoring lockdowns and the reopening of key sectors in other countries, industry officials say.

Interstellar founder Takafumi Horie on Wednesday went to Twitter to ask his followers to support the project, saying, "We won't give up." The 47-year-old entrepreneur holds out hope for global satellite broadband and a real-time Google Earth-like service.

Relying on foreign liftoff services is a logistical headache. 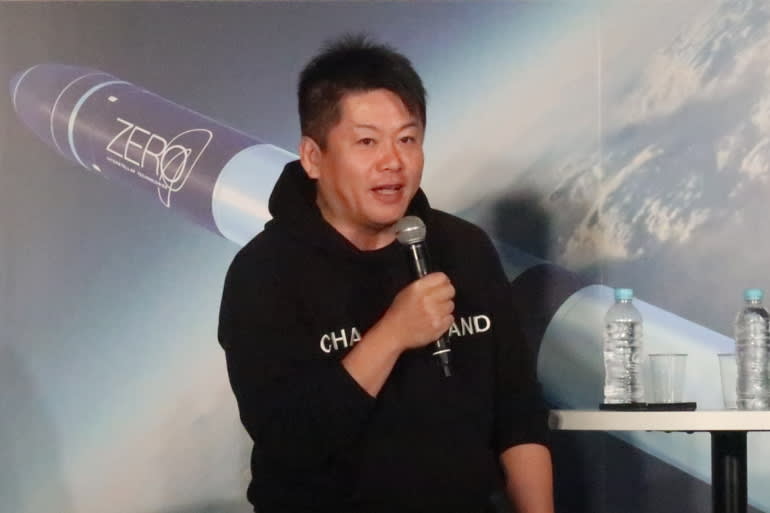 "It is a huge hassle having your satellite launched overseas," says Koh Kamachi, chief engineer of Ale. The company needed to gain regulatory approval from Japan, New Zealand and the U.S. to launch its satellite because the American launch company, Rocket Lab, had its launchpad in New Zealand. "As long as Japan depends on foreign countries for launch," Kamachi concluded, "the growth of the commercial space industry will be limited."

There is another Japanese company looking for inexpensive domestic launch options. Tokyo-based Axelspace has one satellite in low-earth orbit and plans to add four more this year and another five by 2022. Small satellites typically piggyback on rockets carrying larger satellites. A one- or two-year wait is normal, and then the satellite owner cannot choose their preferred orbit.

"We are hoping for a launch service dedicated to small satellites in Japan," Axelspace CEO Yuya Nakamura said. He envisions a launch service that offers airline-like frequency and is as easy to book as an economy seat on a jetliner.

But that kind of optimism is in short supply in Nakamura's industry. 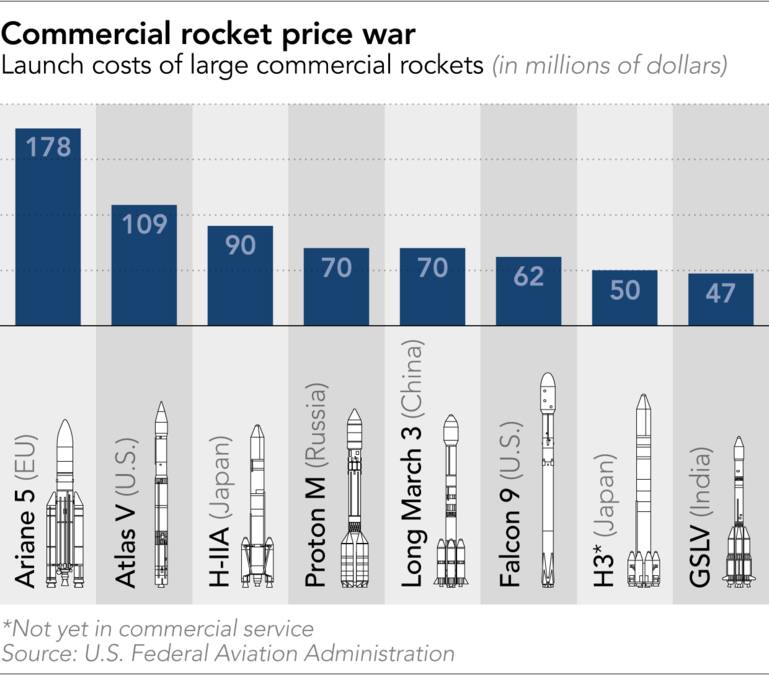 Marino Fragnito, a vice president at Arianespace, the world's leading satellite launch company, says Japan may not be a big enough market to support a commercial launch business. He says a launch service's competitiveness depends on the size of the market and the frequency of launches. He adds that government support is particularly crucial for achieving scale.

"To have an efficient launch system, you need to have the highest possible launch rate," he said, "because the launch rate has a direct influence on the cost of the system. Once you have a [government] market, which can support an affordable launch rate, then you are also competitive in the commercial market."

He notes that even a market as big as Europe has difficulty competing against the U.S. and China, and that Rocket Lab had to move its headquarters to the U.S. from New Zealand to capture U.S. government demand.

Fragnito, who is in charge of Arianespace's Vega solid-fuel rockets, predicts "not many" of Japan's launch startups will survive.

Arianespace is not immune to setbacks. It was the biggest unsecured creditor to bankrupt OneWeb, with $238 million in claims. In March, the company planned to launch an inexpensive ride-share mission, but that has since been delayed due to the coronavirus.

The company is undeterred, however. "The problems of OneWeb are not new to our business," Fragnito said. "The commercial approach for the future will not change."

"I don't think customers always choose the cheapest launch services," Kanazawa said. "Safety and reliability also matter. One-year delays are frequent. Japanese rockets tend to launch on schedule and into the exact orbit with very few failures. They may be a little more expensive, but there will be demand for them."

SpaceBD currently markets rocket ride-shares for the Japan Aerospace Exploration Agency, but in the future, Kanazawa said, his company could provide ride-shares aboard small rockets for very small satellites. SpaceBD intends to court Asian markets like the Philippines, Thailand and Taiwan.

JAXA has been supporting the commercialization initiative in Japan and is keenly aware of the cost-competitiveness issue.

"Many small satellite companies are still at a demonstration stage and prioritize cost over predictability. But once they enter a business phase, they would realize that predictability is important. That's where our competitiveness lies, and I don't think we are too late for that market."

Singapore is home to another small rocket startup. Set up in 2017, Equatorial Space is looking to put its launchpad on a sea-based platform. Founder Simon Gwozdz's goal is to create a service that can send a payload of 150 kg into low-earth orbit for $4.5 million. The cost of the project is estimated at $60 million. The company has so far raised $300,000 and is trying to secure a seed funding for the development of a suborbital demonstration vehicle. At this point, Equatorial Space is a cottage business with 17 workers, six of whom are full-time. But the Polish-Singaporean founder says having a proprietary launch vehicle is a dream for many Singaporean engineers. "Even if it is a small demonstration motor on the ground, once you hear that sound," he said, "it shakes you to the core. It's so powerful. It's so beautiful."

From an economic point of view, Gwozdz said, running a launch service is "a highly strategic capability."

"I think in the next couple of years or decade, not having a launch capability will be a lot like not having an airline," he said. "I think it's a job of entrepreneurs to look at the big picture and see what should be done. I think that's our most important job."