If the F-35A and F-35B blows a tire upon landing, the impact could also take out both hydraulic lines and pose a loss-of-aircraft risk. (Photo by Kei Higuchi)
TETSURO KOSAKA, Nikkei senior staff writerAugust 2, 2019 03:05 JST | Japan
CopyCopied

TOKYO -- Japan resumed training missions of its F-35A stealth fighter jets on Thursday, nearly four months after one of its pilots was killed in a crash involving the U.S.-designed aircraft.

Yet, despite the Defense Ministry's measures to ensure safety, concerns regarding the F-35As remain. On top of the suspected issues regarding the hardware and parts, the contractual restraints that prevent certain countries from making repairs have caused headaches to clients that have adopted the fighter.

In an interim report about the April 9 incident, the Japanese Defense Ministry said that the crash occurred due to a "spatial disorientation" -- the inability of a pilot to correctly interpret aircraft attitude, altitude or airspeed -- of 41-year-old pilot Maj. Akinori Hosomi.

The ministry has conducted safety checks on the F-35s and took measures to ensure against spatial disorientation. It has also given briefings to local governments and other related organizations.

Despite such moves, there are said to be many problems concerning the design of F-35s. U.S. military magazine Defense News reported last month that there have been at least 11 "cases requiring repairs" that went unreported.

Five issues were related directly to the body of the aircraft; including when the F-35B vertically lands on very hot days, older engines may be unable to produce the required thrust to keep the jet airborne, resulting in a hard landing. And with the F-35A and F-35B, debris from a ruptured tire could damage the hydraulic brake system, creating a "loss-of-aircraft risk." 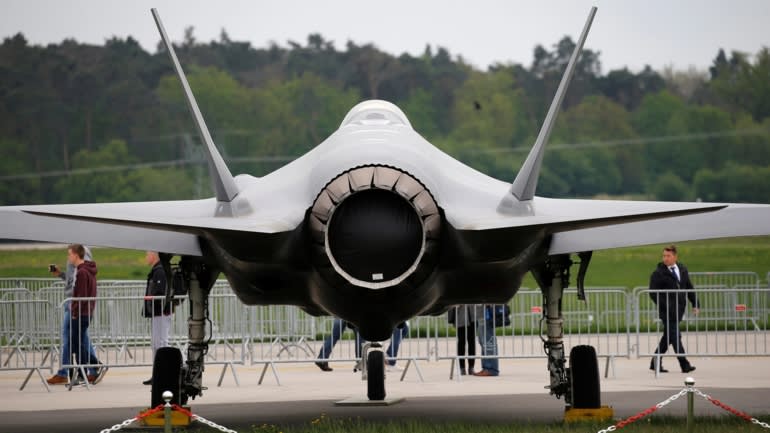 The rear of an F35 fighter jet is seen in Germany. The rear section is said to be vulnerable to heat when flying at supersonic speed.   © Reuters

Following the Defense News report, the U.S. military and Lockheed Martin, the U.S. developer of F-35s, immediately announced that they had already taken, or are considering, measures to fix the problems.

But security concerns remain. In F-35B and F-35C, operating the afterburner at a speed exceeding Mach 1.2 may damage the stealth coating and the horizontal tail. Specifically, the F-35B requires a cooling time of 3 minutes after flying for 80 seconds at Mach 1.2.

However, a 3-minute cooling time is unrealistic in a training mission where pilots simulate a life-or-death exchange of air-to-air missiles in a matter of seconds. Meanwhile, concrete countermeasures for the tire issue have yet to be released. These two problems concern the F-35B short take off and vertical landing, which the Japanese Self-Defense Force is scheduled to introduce.

Two weeks after the crash, the Nikkei Asian Review reported a problem with the jet's Onboard Oxygen Generation System, or OBOGS. The problem was not included in the 11 unreported problems as it is widely known among people familiar with the matter. But there have been no reports that the problem has been solved.

It is not uncommon for modern fighter jets to have various defects from early development to initial operational stages, given their numerous pieces of high-tech equipment. Aircraft are things that are fixed while being used. Successive fighter jets that have been operated by the Japan Air Self-Defense Force for many years, such as the F-4 and the F-15, have also followed a similar process.

In the case of the F-35, it was developed with the ambitious goal of making it a "Joint Strike Fighter" to be used by three military branches -- the air force, the navy and the marines.

Because of this background, the F-35s have a complex design, and the development period became longer with ballooning costs. The project came under pressure from political circles and elsewhere for early completion.

This might have resulted in a situation where military officials had no choice but to rush the launch of the F-35s.

A series of upgrades will be done to the F-35 over the next several decades. The plan is to have F-35 models in use until around 2070.

But this creates a serious problem for Japan. While Tokyo is committed to using more than 100 F-35s in its air fleet for more than half a century, it will be unable to make improvements voluntarily.

This is because the F-35 is part of a massive international project, with nine countries -- the U.S., the U.K., Canada, Australia, Italy, the Netherlands, Denmark, Norway and Turkey -- being recognized as "partner countries" in the aircraft's joint development and production.

Japan is now in a position to export defense equipment and participate in joint development projects. But it was not so formerly. In the 1990s, when the F-35 development project was launched in the U.S., it was unthinkable that Japan would become a partner country.

Even after Japan decided to procure F-35 aircraft, its position was not as a partner country but merely a purchasing country, similar to Israel, South Korea and Belgium.

This means that F-35 crew members of the Air Self-Defense Force will be put in a more dangerous situation than their counterparts in the U.S. and other militaries.

Defense News reported Monday that Japan had written a letter formally expressing interest in joining the F-35 program as a full partner, but the Pentagon plans to deny the request.

The U.S. Defense Department, the report said, citing unnamed sources, will not agree to upgrade Japan's status over fears it would upset partner countries and open the door to other purchasing countries seeking similar treatment. Sweden has declared its participation in the U.K.-led “Tempest” fighter jet development project. The next-generation fighter jet is one of the candidate successor aircraft to Japan’s F-2.   © Reuters

To be sure, the U.S. position is understandable.

But it will be a major blow it Tokyo if its request is not accepted by one of its biggest allies. Purchasing fighter jets built overseas without being able to upgrade them voluntarily, despite entrusting them with the lives of its own crew, is something against Japan's will, indeed.

Japan was once a leader of cutting-edge aircraft design. Before World War II, Japan's development of fighter jets surpassed that of the U.S. and Europe. That was because Japan continued to pursue a policy of developing such aircraft as a whole on its own.

Meanwhile, the Japanese government is now under pressure to make a decision on the development of successor aircraft to the F-2 support fighter.

The U.S. apparently wants to realize the joint development of the successor aircraft at any cost, just as it developed the F-2 jointly with Japan, partly to keep Japan's fighter jet development capabilities under surveillance.

But there are persistent calls within SDF and the Japanese defense industry for the country to develop the new aircraft on its own this time.

If the U.S. formally declines Japan's request to be upgraded to an F-35 partner country, calls for the independent development of fighter aircraft will likely gather steam.