Mitsubishi Heavy Industries will lead development of the replacement for the F-2, which will be decommissioned starting in 2035. (Photo courtesy of Japan's Air Self-Defense Force)
ANNU NISHIOKA and AZUSA KAWAKAMI, Nikkei staff writersNovember 4, 2020 11:58 JST | Japan
CopyCopied

TOKYO -- Long relegated to producing U.S.-developed aircraft on contract, Japan's defense industry is aiming to turn the page by building a homegrown fighter jet under the lead of Mitsubishi Heavy Industries.

Despite ever-growing geopolitical threats, Japan's defense contractors for years have struggled to achieve financial success. The new project could prove a turning point for the industry, though obstacles like a cutthroat bidding process and rising imports remain.

Japan's Defense Ministry on Friday signed a formal agreement with Mitsubishi Heavy for the jets, which will replace the Self-Defense Forces' F-2s being decommissioned starting in 2035. About 90 of the new generation jets are expected to be produced.

"We hope to do this properly to defend the country," a Mitsubishi Heavy executive said.

Also on Friday, Mitsubishi Heavy announced its medium-term plan for the three years through March 2024. News of the fighter jet contract was a much-welcomed bright spot for the company, which logged a 57 billion yen ($545 million) net loss for the April-September half and recently halted development of its SpaceJet commercial airplane.

In developing the fighter jet, Mitsubishi Heavy will be leading a team of Japanese and foreign companies to be chosen as early as this year. There is speculation the entire project could be worth over 5 trillion yen, which could help Mitsubishi Heavy offset the 1 trillion yen it poured into the failed SpaceJet.

A homegrown fighter jet would also allow Mitsubishi Heavy and other Japanese defense contractors to develop their expertise in aircraft development and manufacturing, a highly technical field. Until now, Japan's Air Self-Defense Force relied on planes developed by the U.S., meaning technology from their core parts was not disclosed to Japanese companies.

The new jet "will strengthen the foundation of our defense industry," an industry insider said. 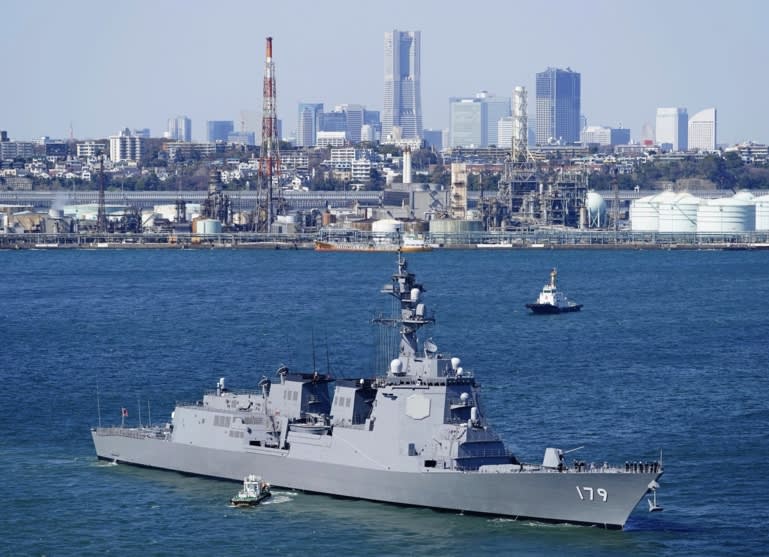 Hopes for the project have been amplified by the headwinds buffeting Japan's defense industry as a whole. Roughly 40% of the more than 4,000 defense-related companies in Japan in 2012 were losing money, according to Teikoku Databank.

"Companies that only receive small-scale orders have no choice but to drop out," said Kazuhisa Ogawa, a professor at the University of Shizuoka and one of Japan's leading defense analysts.

For example, Sumitomo Electric Industries announced that it would stop making fighter jet components back in the 2000s. Komatsu stopped development of certain vehicles for the Ground SDF in 2019, and Mitsui E&S Holdings in June announced that it was considering selling its shipbuilding unit.

The Japanese government set a record defense budget for the sixth straight year for fiscal 2020, in response to growing geopolitical risks ranging from China's maritime expansion and North Korea's nuclear development, to an inward-focused U.S. Still, the country's defense contractors continue to struggle to turn a profit.

A 2006 change in the bidding process is one reason why. Previously, made-to-order defense equipment was typically purchased via no-bid contracts, a practice that drew criticism for a lack of transparency. Open competitive bidding became a requirement from 2006 on, which led to escalating price wars. In one case, a shipbuilder submitted a contract proposal with terms that would lose it money on the project.

A rise in imports of defense equipment, particularly through the U.S. government via the Foreign Military Sales program, also plays a role. Japan budgeted 692 billion yen for overseas defense procurement contracts, according to the Defense Ministry -- well over triple the figure a decade earlier. Tokyo has faced pressure from U.S. President Donald Trump's administration to ramp up imports, and if he is reelected, Japanese defense contractors may find even fewer opportunities to win orders.

The industry will need to do some work of its own to get back on its feet. In Western countries, post-Cold War declines in defense spending drove realignments in related sectors. The U.S. aerospace industry consolidated from around 40 companies to four major players, and Europe's shrank from 30 to three.

U.K.-based BAE Systems and Lockheed Martin of the U.S. each bring in tens of billions of dollars in annual revenue from defense-related operations, and both logged operating profit margins exceeding 10% for 2019.

By contrast, even Mitsubishi Heavy, Japan's largest defense contractor, earns just under $4 billion in revenue from its defense business, representing only about a tenth of its total.

"Its operating margin is no more than 5% because it can't leverage economies of scale," said Tomohiko Sano of JPMorgan Securities Japan.

The next-generation fighter jet project, which is set to rally Japan's defense industry around Mitsubishi Heavy, could spark a consolidation with the potential to bolster not only technological innovation, but profitability as well.