Philippines, Malaysia and Indonesia bet on space as growth engine NAGOYA, Japan -- Asian countries are betting that the space industry will provide a new engine of growth, as the global economy sputters and government finances become overstretched.

A case in point: the Philippines.

"We cannot miss this boat," said Joel Marciano, head of the space program at the Philippine Department of Science and Technology, in an interview with the Nikkei Asian Review.

The Philippines currently has three satellites in orbit that were developed with Japanese universities. The know-how has been applied to a curriculum for universities in the Philippines, which aims to build and launch four or five more in the next few years, Marciano said.

"There is a big growth spurt in this sector now," Marciano said. He was in Japan for the annual meeting of the Asia-Pacific Regional Space Agency Forum on Nov. 26-29 in Nagoya. Joel Marciano, head of the Philippines' space program, wants to carve out a niche for his country in the global space industry. (Photo by Koji Uema)

Manila is not alone in seeing opportunities in "new space" -- commercial space activity, such as launching rockets and satellite-based services for businesses -- that has emerged in recent years. China, South Korea, India, Indonesia and Malaysia are all looking to capture a piece of the new market -- or at least get in the game.

Governments still dominate space programs in Asia. In Japan, 90% of hardware orders come from the government. The country is trying to boost the private sector's share to around 50% -- on par with the U.S. and Europe.

The four-day forum, now in its 26th year, is still not a business-centric industry event like its American counterparts. But the presence of a dozen or so company booths and the vibrant discussions at startup sessions give an indication that "new space" is reaching Asia.

The rush for space business also reflects the growing economic power of Asian countries and emerging geopolitical competition within the region.

"You have to know what your value propositions are for doing that if [SoftBank Group's] OneWeb and [SpaceX's] Starlink are already providing global internet at an affordable price," Marciano said. "We have to prepare ourselves for opportunities down the stream."

The Philippines is home to major electronics companies such as Integrated Micro-Electronics and Ionics EMS. The country is known as a hub for call center services, but that position is being threatened by the spread of artificial intelligence and robots that are replacing call center workers. Aerospace could fill the void.

Commercial space startups were a hot topic at this year's Asia-Pacific Regional Space Agency Forum in Nagoya on Nov. 26-29. (Photo by Koji Uema)

In China, more than 200 private space companies are already in operation. The government's China National Space Administration focuses on the development of cutting-edge technologies, leaving mundane programs to the private sector. In South Korea, the government is pursuing the "industrialization" of space technology, letting private companies such as Korea Aerospace Industries participate in the production of rockets and satellites, which had been dominated by the government-owned Korea Aerospace Research Institute in the past.

Malaysia is the latest in Asia to bet on the "new space" boom.

The country has long been a poster child of free trade, content to purchase satellite data from other countries rather than pursue an indigenous space program. But that is about to change.

"We can't rely on other people's (satellites) all the way," Azlikamil Napiah, director-general of the Malaysian Space Agency, told Nikkei. "We need to create a good ecosystem in our country, particularly in space technology," he said. "One day we will also need to have our own satellite, our own space sector."

The renewed emphasis on manufacturing comes as Prime Minister Mahathir Mohamad tries to boost jobs and the economy while also trying to keep the country's fiscal deficits in check.

"Malaysia wants to be one of the aerospace nations by 2030," Napiah said. Developing and servicing satellites will have "more impact on the economic sector," he added.

For that end, the Malaysian government is pursuing partnerships with the private sector. "The government can't provide the cost all the way, because space technology is quite expensive," he noted. Commercialization is also spreading to India, where the doctrine of "space for national development" has long held sway, a legacy of the philanthropic founder of India's space program, Vikram Sarabhai.

The shift comes in response to the emergence of the global space industry and renewed interest in manned missions to the Moon, Mars and beyond, according to Mukund Rao, adjunct professor at the National Institute of Advanced Studies in Bangalore.

"India has realized that if it wants to play an important role in space and in the global community, it has to equate itself with what is happening in the globe," he told Nikkei. "India realizes that if it is not part of that, it's going to be left behind."

The Indian Space Research Organization also recognizes that it will not be able to build enough rockets and satellites by itself to deliver social services -- television, education, healthcare and disaster warning -- to its 1.3 billion people.

The shift to the private sector has yet to happen, however. Private companies supply subsystems and components for ISRO. "In recent years, there is thinking that we should ask industry to build total systems -- total launch vehicle and total satellite," Rao said. Indonesia, too, hopes the private sector will meet the challenge of building an indigenous rocket and satellite program amid tight fiscal conditions.

Under the current government of President Joko Widodo, the focus is on infrastructure such as roads, seaports and airports, not on aerospace, whose budget has been flat in recent years.

"If we just depend on international satellites, it is not enough," said the Kyoto University graduate in an interview. "If there is problem in international relations, it is better we have the capability to make satellites, along with a launcher."

Indonesia has built sounding rockets 45 cm in diameter and is now developing a slightly larger one 55cm in diameter. LAPAN has also developed a 19-passenger aircraft, aiming to put it into production next year. 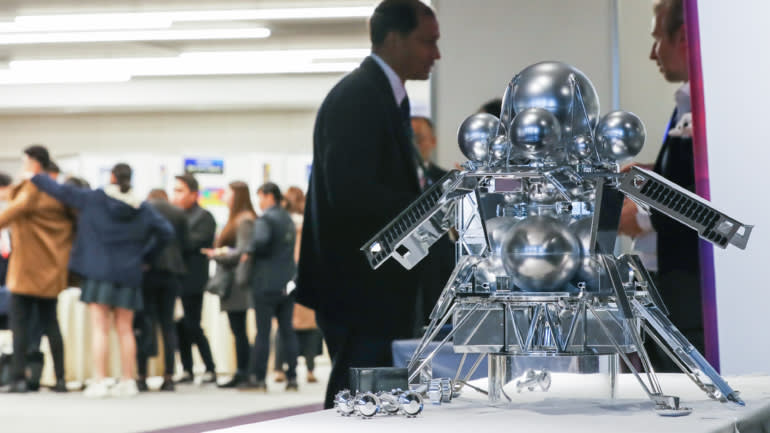 Commercial discussions at business booths were a common sight at the Asia-Pacific Regional Space Agency Forum this year. (Photo by Koji Uema)

Indonesia's long-term space master plan calls on the nation to acquire the capability to manufacture and launch small rockets and satellites from a domestic spaceport by 2040. "The dream of Indonesia is to become one of the space-faring nations of the Asia-Pacific region," Djamaluddin said.

But his vision of opening "an equatorial commercial space port" depends on funding. There has been talk of China helping to build the spaceport. Officials stress that the project will not be a government-to-government contract and they are looking for a commercial partner.

"If there were an international partner from any country to collaborate on this one, we could realize a launching site by 2024," Djamaluddin said.