Space enthusiasts in Japan ready to launch their own satellite TOKYO -- Interest in commercial aerospace is growing among amateurs in Japan, with enthusiasts assembling rockets and satellites by trial and error. As the space business grows around the world, amateur builders and launchers, including office workers and students, are challenging the idea that outer space is the sole domain of professionals.

"Let's disassemble it and replace the component," says a voice at a small workshop in Tokyo's Edogawa Ward. Spread out on a table are several components. In the center is a satellite, one side of which measures about 10 cm. The person who suggests replacing the part is working away in a sweatsuit.

The people gathered in the workshop are members of Ryman Sat Spaces, a group composed of aerospace enthusiasts, including office workers and students. On weekends they get together to build satellites and rockets. The group has about 790 members in all.

Most have no formal experience in the space industry. Those with training in technology -- system engineers and the like -- make up about 70% of the membership, while the rest have nontechnical backgrounds. They work in teams assigned to specific tasks, including satellite and rocket development, public relations and designing novelty goods to promote the group.

Ryman Sat Spaces raises funds mainly from donations, the sale of novelty goods and crowdfunding. Members take turns paying for components out of their own pockets and bring their own tools, such as soldering irons, to help with projects. Tiny satellites can cost anywhere from 2 million yen to 3 million yen $19,000 to $28,000) apiece to put together.

The group grew out of a casual conversation in 2014 at a bar in Tokyo among three office workers, including the group's future director, Kazutaka Otani. As they were discussing their dreams, someone suggested, "Wouldn't it be great if we could do commercial space ourselves." 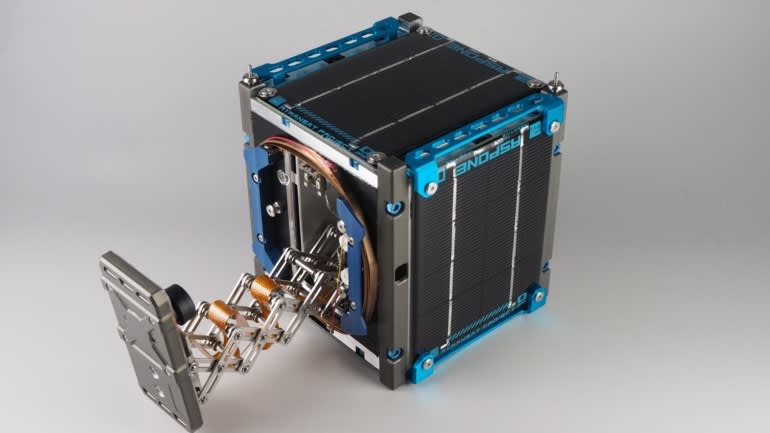 Ryman Sat Spaces’ "selfie satellite" is designed to take photos of itself with Earth in the background. (Photo courtesy of Ryman Sat)

They added two more people to their club, forming what would become Ryman Sat Spaces. Then they put up an exhibit at a manufacturing trade show where they invited others to join the group, handing out flyers that read: "Join us to make your own satellites!"

Since then, Ryman Sat Spaces has grown by around 100 members a year, people with diverse career backgrounds and ways of thinking. They boned up on aerospace using research papers published online and books on how to make satellites.

After a great deal of trial and error, the group forged a relationship with the Japan Aerospace Exploration Agency (JAXA). In 2018, Ryman Sat Spaces successfully held its first test launch.

The group is now putting the final touches on a "selfie satellite" ahead of a launch scheduled for Sunday. The tiny satellite has a camera attached to an extendible arm that will take pictures of itself with the Earth in the background.

The satellite will be carried into orbit on a rocket that is delivering cargo to the International Space Station. After the delivery vehicle arrives at the space station, astronauts will transfer the satellite to Kibo, the station's experiment module built by Japan. Within a few months, the selfie satellite will be released into space.

Ryman Sat Spaces took part in a JAXA program to encourage the private sector to make use of the International Space Station. Its satellite will contribute to the development of technology designed to check satellite hardware while in flight.

With the selfie satellite project underway, Ryman Sat Spaces is working on its next unit. Eventually it aims to launch one satellite a year.

"Space development is not only for people with impressive backgrounds," Otani says. Armed with growing confidence in their technical skills, some have decided to start a business. The aerospace startup will launch by the end of February at the earliest. Another private-sector group working on commercial space is based in Osaka. The motto of the "Dream Satellite Project," led by Fantastical AeroSpace Promotion Incorporated Association Muchu, is that anyone can own a satellite. The project is offering 1,000 investors who contribute 10,000 yen shared ownership of their satellite.

Kikuchi has a track record on space projects, helping to develop the power unit for the Hodoyoshi satellite built by the University of Tokyo. At the time, Kikuchi says, people were surprised when he told them he was involved in making satellites.

He started to question the idea that "space development was left only to JAXA," and that let him to start the dream satellite project, which is currently funded by about 400 owners. Several members, including university professors, get together to work on the satellite on weekends. They are "aiming for launch by the end of 2022," says Kikuchi.

Around the world space development is shifting from the public to the private sector. SpaceX, led by American entrepreneur Elon Musk, has put astronauts in space using its own rocket. In Japan, there are about 50 known space startups.

Morgan Stanley estimates the global market for commercial space will exceed $1 trillion by the 2040s, about three times as big as in 2020. Grassroots activities that help lower entry barriers for developers will help foster that growth.