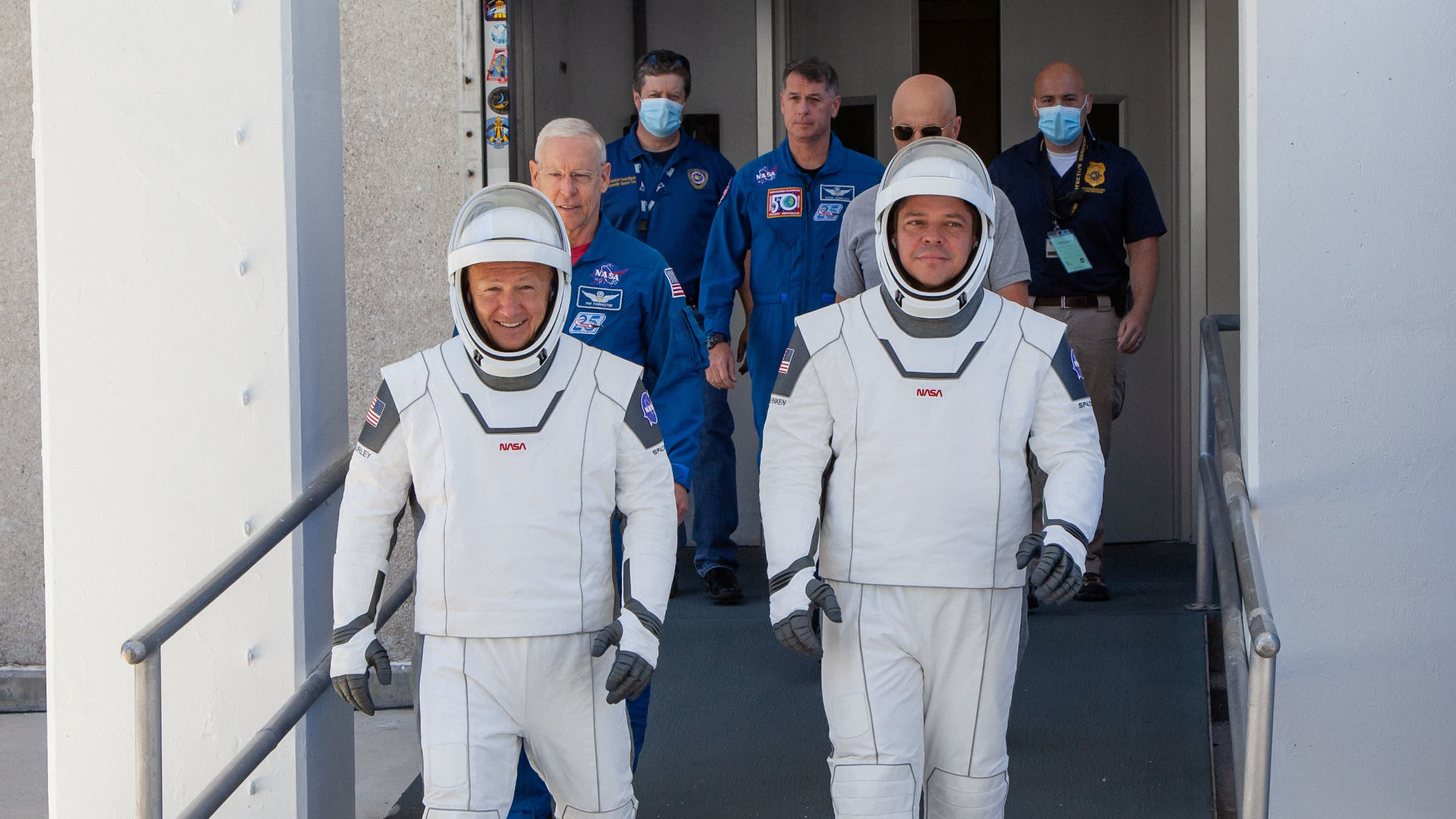 NASA astronauts Douglas Hurley, left, and Robert Behnken during a dress rehearsal ahead of the SpaceX Demo-2 mission to the International Space Station in Cape Canaveral, Florida, on May 23. (Photo by NASA via Reuters)
May 28, 2020 05:40 JST | North America
CopyCopied

CAPE CANAVERAL, U.S. (Reuters) -- SpaceX, billionaire entrepreneur Elon Musk's private rocket company, was forced by foul weather to scrub a planned launch on Wednesday of two Americans into orbit from Florida, a mission that would mark the first spaceflight of NASA astronauts from U.S. soil in nine years.

The countdown was halted less than 17 minutes before the SpaceX Falcon 9 rocket was due to lift off from the Kennedy Space Center, propelling Doug Hurley and Bob Behnken on a 19-hour ride aboard the company's newly designed Crew Dragon capsule to the International Space Station.

The next launch window is set for Saturday afternoon, when SpaceX will make a second attempt to send the astronauts into orbit.

The scrubbed launch came on a day with off-and-on rain over Florida, and the National Weather Service had issued a tornado warning for the area. Flight operations managers were monitoring a number of ominous weather conditions, including the threat of lightning, even as crews began loading the rocket with fuel.

By then, Hurley, 53, and Behnken, 49, were already strapped into their Crew Dragon seats, after having made their way up a 265-foot-tall (80-meter) tower to the access bridge that leads to the capsule atop the Falcon 9 rocket.

A live NASA television broadcast livestreamed on the internet showed the two men sitting and appearing calm, side by side in their white flight suits, as the launch postponement was announced.

President Donald Trump had already flown aboard Air Force One to Florida and arrived at Cape Canaveral to observe the launch. Musk, Vice President Mike Pence and NASA chief Jim Bridenstine also were there for the planned launch.

The astronauts were to have blasted off from the same launch pad used in 2011 by NASA's final space shuttle flight, which was piloted by Hurley. Since then, NASA astronauts have had to hitch rides into orbit aboard Russia's Soyuz spacecraft.