Startups in Southeast Asia eye space as next frontier for expansion

Tech companies hope to cash in on lucrative $415bn industry 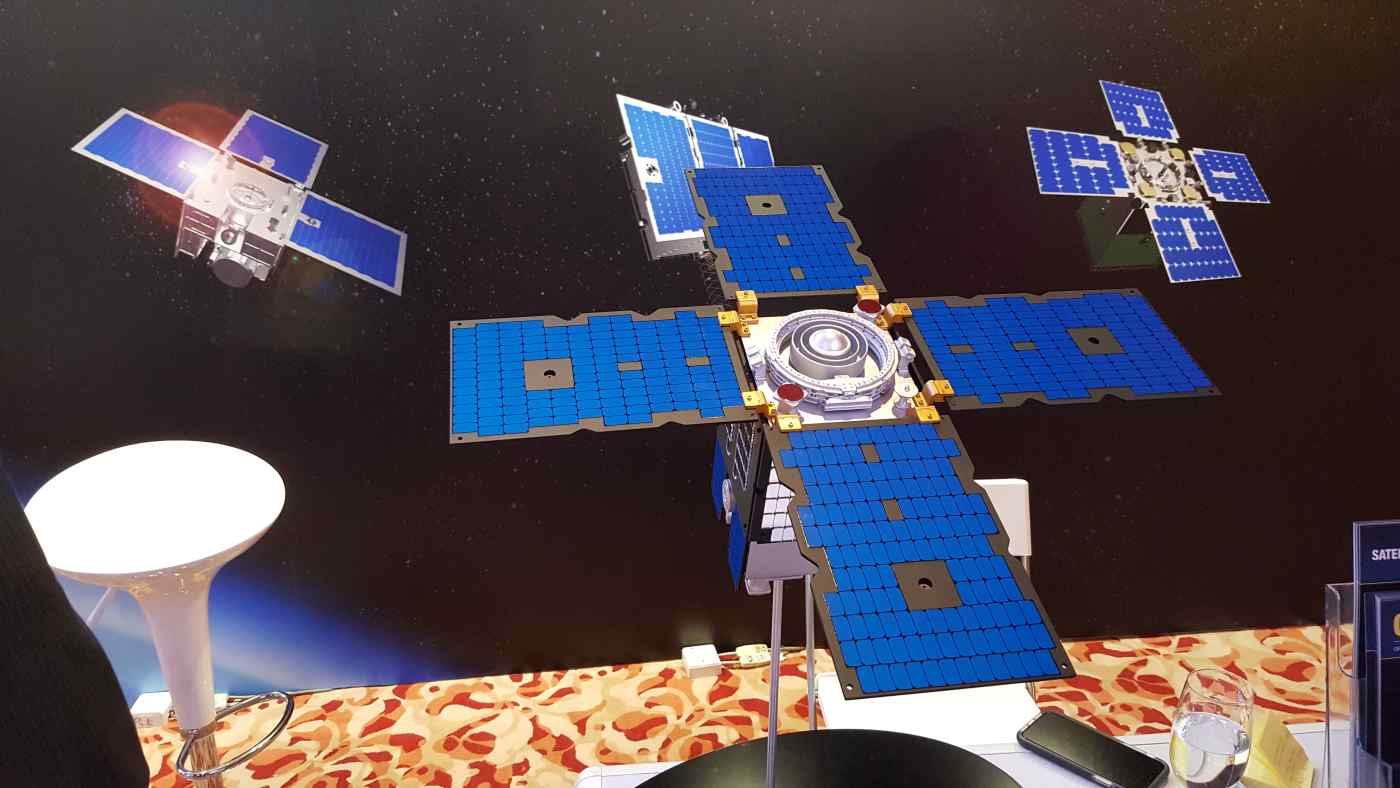 A model of a satellite on display at the 2020 Global Space and Technology trade show in Singapore (Photo by Dylan Loh).
DYLAN LOH, Nikkei staff writerFebruary 11, 2020 16:19 JST | Singapore
CopyCopied

SINGAPORE -- Singapore-based startup SpaceChain has a grand vision for blockchain, with plans to take the digital ledger technology beyond this world and into space.

Blockchain, a decentralized means for storing and recording digital transactions which is best known for underpinning the use of the Bitcoin cryptocurrency, has quickly been embraced by tech companies around the world. But SpaceChain wants to take it further.

The company has been launching its technology beyond the earth's atmosphere to link up with satellites and create a space-based network that promises to serve blockchain users more securely and efficiently than earth-based systems. Most recently it sent a payload to the International Space Station.

"Once you have any kind of space storage you potentially have access to global coverage," SpaceChain's Chief Executive Zee Zheng told the Nikkei Asian Review.

The company, founded in 2017, is among a handful of young upstarts in Southeast Asia looking to make their mark in a multi-billion-dollar industry traditionally dominated by governments and Western multi-national corporations.

But the Southeast Asian region is gradually waking up to the potential of the "space economy", which the Space Foundation, a U.S. non-profit industry advocate, has estimated to be worth around $415 billion globally.

While large economies like the U.S., China and India have space programs that easily dwarf the initiatives of their counterparts in Southeast Asia, it has not stopped smaller players in the region from aiming high.

Startups NuSpace and Aliena, also from Singapore, have partnered with Santa Clara-based space technology provider Momentus to launch a nanosatellite that will showcase autonomous orbital maneuvers in the first quarter of 2021.

"It demonstrates that Singapore, albeit being a small nation, has local talents and capabilities to support a space industry that through collaborative initiatives will allow the local space sector to thrive," Zhen Ning, NuSpace's chief executive said.

The city-state recently launched Project Cyclotron, an accelerator backed by the public and private sectors, to support fledgling space and deep tech companies and help them commercialize applications for the sector.

"There are a lot more younger companies, startups and innovators, I think, that are trying to enter this market because the space industry has evolved, the barriers to entry have also come down. So with this democratization of space, you get a lot more newer players," Jonathan Hung, president of the Singapore Space and Technology Association, told Nikkei.

The association represents the interests of organizations in the city-state's burgeoning space sector, and held its annual Global Space and Technology trade show in Singapore this month -- billed as Asia's largest convention for the industry with attendees having increased from 80 in 2008 to 800 this year.

The organization also has a hand in running the Project Cyclotron accelerator. Four years ago, Hung said he knew of fewer than five local startups clamoring for a piece of the space pie. Today he knows of more than 15.

Hung reckoned the rise of mobile-based applications that lean on satellites to deliver location-based services to people, which has driven the popularity of ride-hailing and food delivery offerings in the market, has generated spin-off businesses for startups eager to be a part of the space economy.

This interest is reflected in the Philippines, too. The country has startup enablers like QBO and Launchgarage supporting the growth of young tech companies seeking to make their names in space-related businesses, said Rogel Mari Sese, president of space consultancy Regulus Spacetech.

"The growth that we've been seeing in the past few years is mainly attributed to the development of the technology from other sectors like manufacturing and electronics," said Sese, who also leads the Philippines' space development program.

"These technologies have become mature enough that it came to the point that you no longer need to have a huge government investment. It can be now driven by the private sector," he added.

Though still small in comparison with its western counterparts, Sese estimates Southeast Asia's space economy will easily surpass $1 billion in value. He said the Philippines' Aerospace Industries Association, which also covers the interests of organizations in the space sector, has seen its ranks grow from around 10 members to more than 50 over the past five years, with startups with an interest in space-related activities making up about a third of the membership.

Officials from the space agencies of Thailand and Indonesia told Nikkei that startup activity in their countries' space sectors was still small, with a handful of young companies focusing efforts on developing drones for aerial photography to complement the use of satellite imagery from space.

"A few years ago, we established a plan to promote startups and private sector [involvement in the space industry]," Anond Snidvongs, executive director of Thailand's Geo-Informatics and Space Technology Development Agency, told Nikkei.

"The government's role will be relatively less," he said. "What we still have to do is to regulate [for] monitoring standards and quality control," Snidvongs added.

"Space technology is high-tech, high-cost and high-risk," Thomas Djamaluddin, chairman of Indonesia's National Institute of Aeronautics and Space, told Nikkei. "At least we introduce the technology, and we [can] provide facilities for integration, testing and so on," he said.