A Taiwanese Navy submarine takes part in a drill off the island's northeastern coast in 2018. Upgrading the fleet has been a priority.   © Reuters
YU NAKAMURA, Nikkei staff writerNovember 25, 2020 03:15 JST | Taiwan
CopyCopied

TAIPEI -- Taiwan has began constructing its first home-built defense submarine, part of the self-ruled island's efforts to bolster its defense capabilities in response to growing pressure from mainland China.

"Peace is dependent on national defense," Taiwanese President Tsai Ing-wen said Tuesday at a ceremony to mark the event. "By building our own submarines, we will demonstrate our strong commitment to protecting Taiwan's autonomy."

The ceremony comes as tensions between Taipei and the mainland remain high under the independence-leaning Tsai. China maintains it has sovereignty over Taiwan and has not ruled out taking control of the island by force. The ceremony also follows reports that a high-ranking U.S. Navy official visited the island last week.

The diesel-powered vessel, constructed by private-sector shipbuilder CSBC, is slated for completion in 2024 and commission in 2025. The Taiwanese government has budgeted a total of 49.3 billion New Taiwan dollars ($1.73 billion) for the project.

The model is believed to be based off the Japanese Maritime Self-Defense Force's Soryu-class submarines, which are some of the most advanced diesel submarines in the world, and will likely be equipped with U.S.-developed combat systems. Taiwan plans to eventually build eight of these vessels, which has drawn sharp rebuke from the mainland Chinese government. 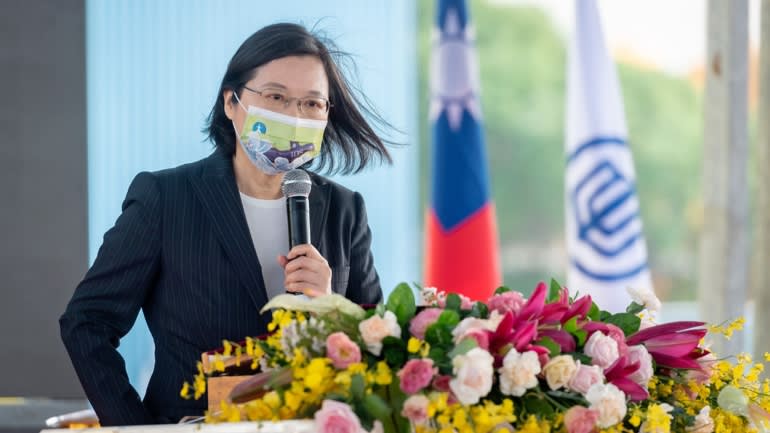 Taiwanese President Tsai Ing-wen said the new submarine showed a "strong commitment" to the island's autonomy at a ceremony on Nov. 24. (Photo courtesy of Office of the President, Taiwan)

Building a submarine is an extremely complex endeavor. "About 60% of the technology is Taiwanese, and we'll rely on imports from the U.S., Europe and elsewhere for the other 40%," said Su Tzu-yun at Taiwan's Institute for National Defense and Security Research, adding that the finished product will be more sophisticated than the average submarine.

Taiwanese forces currently possess four submarines, though they are outdated and need to be replaced. The island had been pushing the U.S. to sell cutting-edge models, which would help deter China's maritime expansion.

While the U.S. authorized submarine sales to Taiwan in 2001, under then-President George W. Bush, it ultimately fell through amid heavy pushback from Beijing.

Tired by the lack of progress, the Taiwanese navy urged Tsai's predecessor, Ma Ying-jeou, to build the submarines at home instead. But the proposal never gained steam under Ma, who was more concerned with warming relations with the mainland, and only began to advance after Tsai took office in 2016.