A memorandum signed recently by White House National Security Adviser Robert O'Brien stipulates that the American presence in Germany would be reduced by 9,500 troops from the 34,500 there now, The Wall Street Journal reported Friday, citing U.S. government officials. It would also cap the number of U.S. service members in Germany at any one time at 25,000. As things stand, rotational forces can swell the count to well above 50,000.

The White House did not deny the report when asked by the Nikkei Asian Review. "While we have no announcements at this time, as commander in chief, President Trump continually reassesses the best posture for the United States military forces and our presence overseas," National Security Council spokesman John Ullyot said in a statement.

The news comes just days after German Chancellor Angela Merkel told Washington that she will not be traveling to the U.S. in June to attend the planned Group of Seven summit due to coronavirus concerns. A reportedly livid Trump then announced he would postpone the G-7 to September, and planned to invite the leaders of Russia, South Korea, Australia and India to join.

It also comes amid rising U.S.-China tensions, accelerated by the new coronavirus and Beijing's decision to impose a new national security law on Hong Kong, but underscored by the intensifying rivalry between the world's two largest economies.

Republican and Democratic lawmakers have recently called for the military to spend more in Asia. The U.S. Indo-Pacific Command, the largest of America's six geographic combatant commands that covers an area stretching from the U.S. West Coast to the west coast of India, recently submitted to Congress a $20 billion funding request over the next six years to bolster U.S. deterrence in the Asia-Pacific. 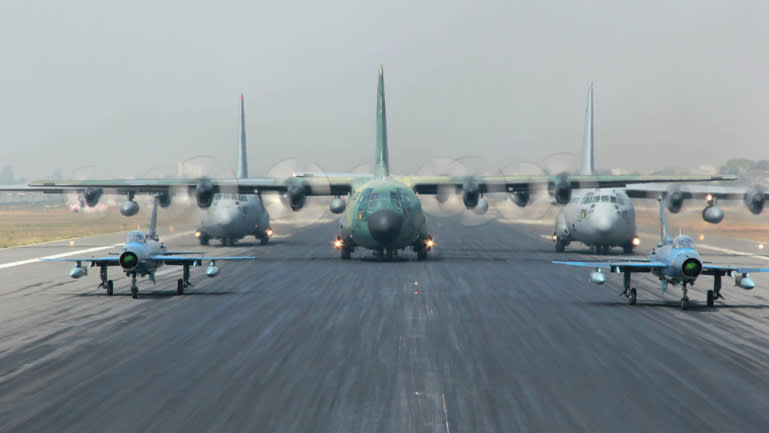 Tied together, the developments point to the administration looking to realign its global posture to adjust to the rising presence of China. It fits with a recent White House report titled "United States Strategic Approach to the People's Republic of China," which states that the U.S. relationship with China going forward will be one of "great power competition."

Davidson's $20 billion wish list for Asia includes the need for long-range precision strike capability into the "First Island Chain," a series of islands that span from Russia in the north to the Malay Peninsula in the south that China regards as an area it must secure and prevent the U.S. military from penetrating.

It also envisions an integrated air missile defense in the Second Island Chain, a line of islands further out in the Pacific Ocean.

A U.S. warship traveled through the Taiwan Strait early Friday, a move Beijing called a provocation. It came the day after 31st anniversary of the Tiananmen Square crackdown. The two sides also have squared off in the South China Sea, where China's territorial claims over most of the waters has ruffled feathers with U.S. allies.

But a reduction of forces in Germany risks weakening the NATO's deterrence against Russia, and puts the Trump administration at odds with neoconservatives in his Republican Party who have traditionally seen Moscow as a threat.

Germany houses the biggest contingent of American forces in Europe and also serves as the headquarters of AFRICOM, which oversees all U.S. military activity in Africa.

Under a nuclear sharing agreement, the U.S. military keeps nuclear bombs in an underground shelter at a German air base. In the case of a nuclear strike, American soldiers will attach the bombs to German planes and activate the code, while a German crew will fly the plane and deliver the payload.