TOKYO -- Asia's first spaceport, located at Oita Airport on the Japanese island of Kyushu, is readying support for Virgin Orbit as the company looks to fire off its LauncherOne rocket in 2022.

Virgin Orbit -- a space venture of the Virgin Group -- will use a modified Boeing 747, christened "Cosmic Girl," as the launch platform for LauncherOne, which carries small commercial satellites into either a sun-synchronous or low-Earth orbit, depending on customer requirements.

In addition to its prime Oita location, the U.S.-based company has chosen four airports in the U.S. and Europe for launching satellites, including Mojave Air and Space Port in California and the U.K.'s Spaceport Cornwall at Cornwall Airport Newquay.

The Oita prefectural government welcomed Virgin Orbit's decision to use its airport in hopes of nurturing a local space industry, using the spaceport project as a catalyst.

The envisioned Oita Spaceport will also give Virgin Orbit an edge as it tries to attract Asian customers, owing to the airport's regional proximity. It will also boost Japan's aerospace industry.

"We are eager to host the first horizontal takeoff and landing spaceport in Japan," Oita Gov. Katsusada Hirose said in a statement. "We are also honored to be able to collaborate with brave technology companies solving global-level through their small satellites. We hope to foster a cluster of space industries in our prefecture, starting with our collaboration with Virgin Orbit."

On May 25, the company conducted the first test launch of its satellite delivery capabilities off the coast of California. Although the test was quickly aborted, it succeeded in igniting LauncherOne's engine after release from the airborne Boeing 747.

Virgin Orbit is doing whatever it can to prevent the coronavirus pandemic from affecting its schedule, said Monica Jan, a senior director in charge of launch operations in Japan. She added that there has been no change in the plan to begin launching from Oita in 2022.

The Oita government was first contacted by Virgin Orbit about the project at the end of June 2019. At the time, Oita was one of multiple candidates. In September, Virgin engineers visited Japan to assess each candidate site.

There are several reasons why Oita Airport was chosen, one of which is its 3,000-meter runway mostly surrounded by the sea. Virgin's space program needs a runway at least that long for Cosmic Girl. Of Japan's 97 airports, only 18 qualify to handle the huge Boeing 747. And busy airports or those located in densely populated areas were ruled out, eliminating Tokyo's Narita and Haneda airports, as well as Kansai International Airport in Osaka.

Even relatively quiet local airports that have long-enough runways were excluded if they were located inland, which would have required the plane to fly over residential areas at some point. A spaceport needs room, and a seaside setting is ideal for ditching the aircraft in the ocean should an accident occur. 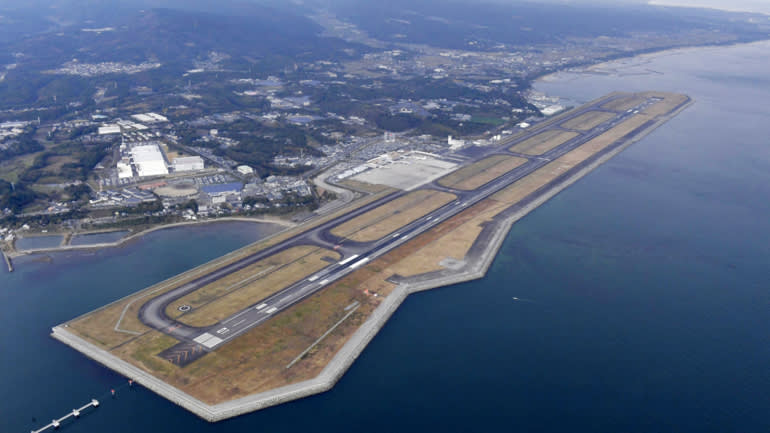 Oita Airport will be home to Asia's first spaceport.   © Kyodo

Oita Airport is built on reclaimed land on the Kunisaki Peninsula, making it ideal for the project. Its north-south runway is surrounded by the sea except for a portion along its western side.

Rocket launch sites are typically designed for eastward launches, which take advantage of the Earth's rotation to propel the rocket or its payload into orbit. Many Japanese launch sites face the east.

But this hardly mattered for Oita being chosen, as Cosmic Girl is essentially a mobile launchpad that can orientate itself after takeoff -- a key aspect of Virgin Orbit's competitiveness. More importantly, Oita Airport has well-developed infrastructure for both air and maritime transportation, Jan pointed out.

While Cosmic Girl will fly to Oita from Virgin Orbit's base in California, the LauncherOne rocket -- manufactured at the company's U.S. factory -- will make the journey by sea, providing a test of nearby port facilities to handle shipments of satellites and other equipment. After LauncherOne is released from Cosmic Girl, its engine ignites to help propel its satellite payload into orbit. (Photo courtesy of Virgin Orbit)

While having Cosmic Girl transport LauncherOne across the Pacific to its new home seems like the practical option, it was not considered due to the delicate nature of the rocket.

"During a long-haul flight, a rocket can be damaged by a bird strike or lightning," says Hidetaka Aoki, director at Space Port Japan, an association pushing for more spaceports in Japan. "Vibrations can also have negative impacts on the rocket."

Though the seaport of entry for LauncherOne has not been decided, Oita Port is the favorite. Some expect that a rocket assembly facility will be built near the airport to handle payloads, which will be delivered by land from the port. Satellites scheduled for orbit will be loaded onto LauncherOne at the facility, after which the rocket will be affixed to Cosmic Girl at Oita Airport.

Virgin Orbit has formed a partnership with ANA Holdings for its Japanese operations. ANA will mainly "evaluate the capabilities to provide aircraft and ground support equipment maintenance, and potentially additional aircraft to support Virgin Orbit's local launch operations," according to the airline.

Large tracts of land are available around Oita Airport, which is easily accessible from the port via large trailer trucks.

While Virgin Orbit has not expressed such a view, the area's tourist facilities may have been another reason behind the Oita choice. The company's customers are businesses and government agencies, the stakeholders of which will likely want to witness firsthand the launch of their satellites.

A number of popular hot spring resorts in the vicinity attracted throngs of international tourists before the coronavirus pandemic. An official at the Oita prefectural government says Virgin Orbit seemed to recognize the marketing advantages of the area.