After lengthy wait, Mazda sports car zips out of the gate 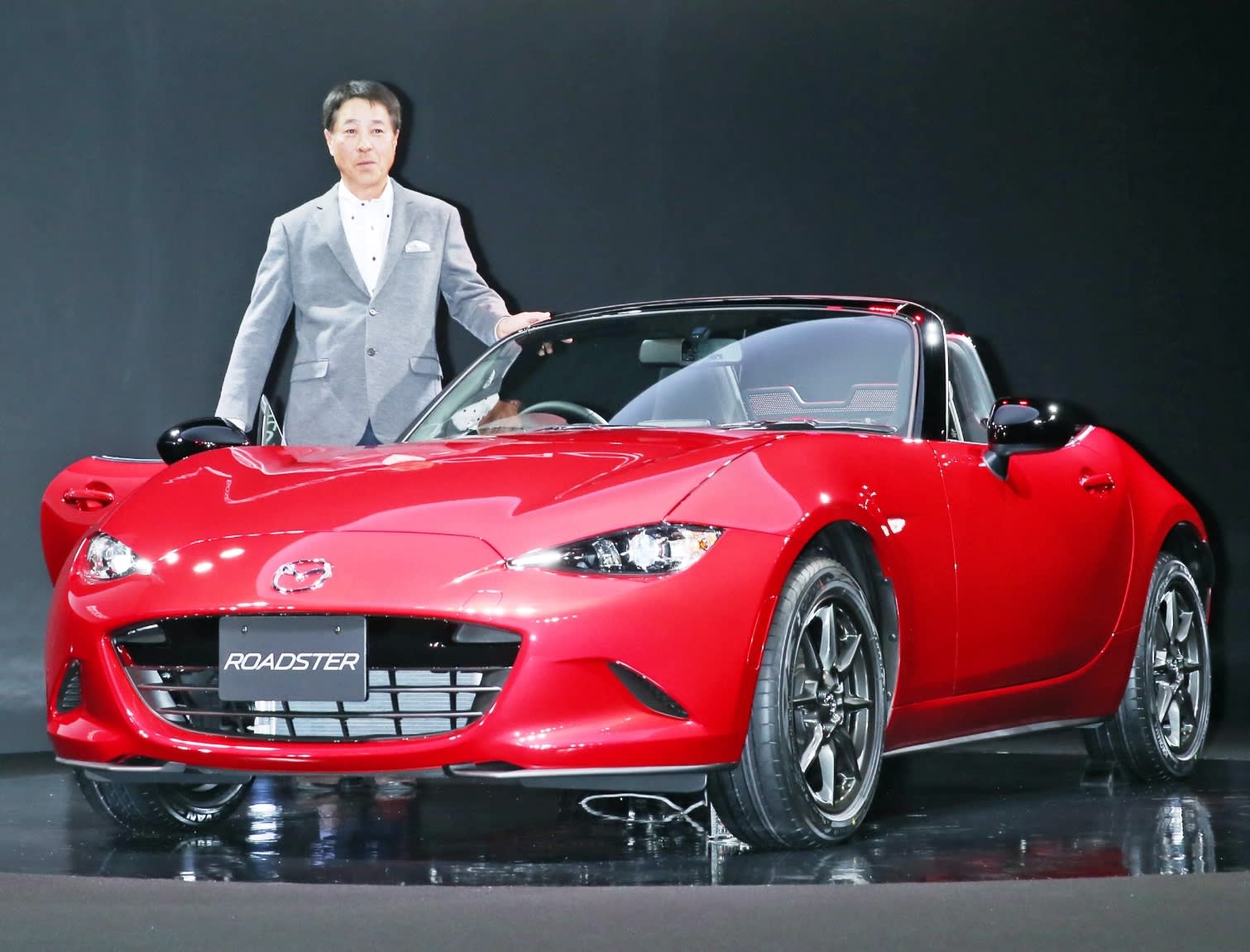 TOKYO -- Mazda Motor on Wednesday unveiled the fourth generation of its MX-5 Miata, which is sold as the Roadster in Japan. The launch was three years behind schedule; there was a moment during the global recession when it seemed it might not happen at all.

The MX-5 development team was in danger of being disbanded after Mazda suffered heavy losses in the wake of Lehman Brothers' bankruptcy in 2008. The target date for releasing a new model, 2012, came and went. But rather than scrap the program, the Japanese automaker revitalized it by creating a lighter, more profitable car based on its proprietary fuel-efficient technology.

This effort preserved a car that has been an icon for the Mazda marque. The all-new Roadster goes on sale in Japan on Thursday, with a starting price of 2,494,800 yen ($20,400). The company has already received more than 3,000 orders, far surpassing the initial target of 500.

The car will be released in key Western markets later.

Sales are off to a flying start, but development was anything but smooth.

In April 2009, Nobuhiro Yamamoto, Mazda's chief engineer and project manager for the fourth-generation MX-5, informed his team that work was being suspended temporarily. Mazda posted a net loss of 71.4 billion yen for the year through that March, due to the global financial turmoil. Management decided to concentrate its financial and human resources on high-volume models.

Yet just a week after breaking the news, Yamamoto put together a smaller development team for the MX-5. Management made it clear what was expected of them. The orders: be "more sensitive" to company finances and "create a car that won't be outdated 25 or even 50 years from now."

Through the end of 2014, 45 meetings were held before management gave the project the final OK -- far more than usual. The prototype was redesigned several times.

"We focused on making the car lighter, in line with its original features," Yamamoto said. Extensive use of aluminum has made the new MX-5 10% lighter than its third-generation predecessor. The car weighs less than 1 ton.

Like other Mazdas, the latest MX-5 features the automaker's Skyactiv technology, which increases compression in the engine to maximize fuel efficiency. This allows Mazda to offer strong environmental performance at low costs.

Despite its smaller 1.5-liter engine, the new MX-5's lightweight body results in the same zippy, pleasurable ride the series is famous for. Every chance it gets, Mazda touts its design philosophy of "unity of rider and vehicle." Mazda President Masamichi Kogai on Wednesday told the media that the new MX-5 offers just that kind of driving experience.

Kogai said the MX-5 forms the "roots" of the automaker's brand identity.

It is not just a pretty face: According to Yamamoto, the use of Skyactiv means the MX-5 should also be profitable enough to contribute to the automaker's bottom line.

Overall, Mazda's group operating profit per vehicle is estimated at about 140,000 yen for the current fiscal year, up 50% from fiscal 2005, when the third-generation MX-5 was released.

Few cars have the following the Roadster does in Japan. It is the focus of numerous auto clubs. Mazda will be paying close attention to what these aficionados have to say about the latest edition.

Toyota President Akio Toyoda is also a fan. When the carmakers held a news conference May 13 to announce a comprehensive business tie-up, he said the little sports car is the Mazda he wants to drive most.

Mazda has a history of falling on hard times every several years. Last fiscal year, it logged its second straight record operating profit, and it expects to raise the bar again this year. The company is hoping the new MX-5 will give its brand a fresh sheen and help keep earnings moving in the right direction.