Outbreak forcing a shift to commercial operations with biosecurity resources 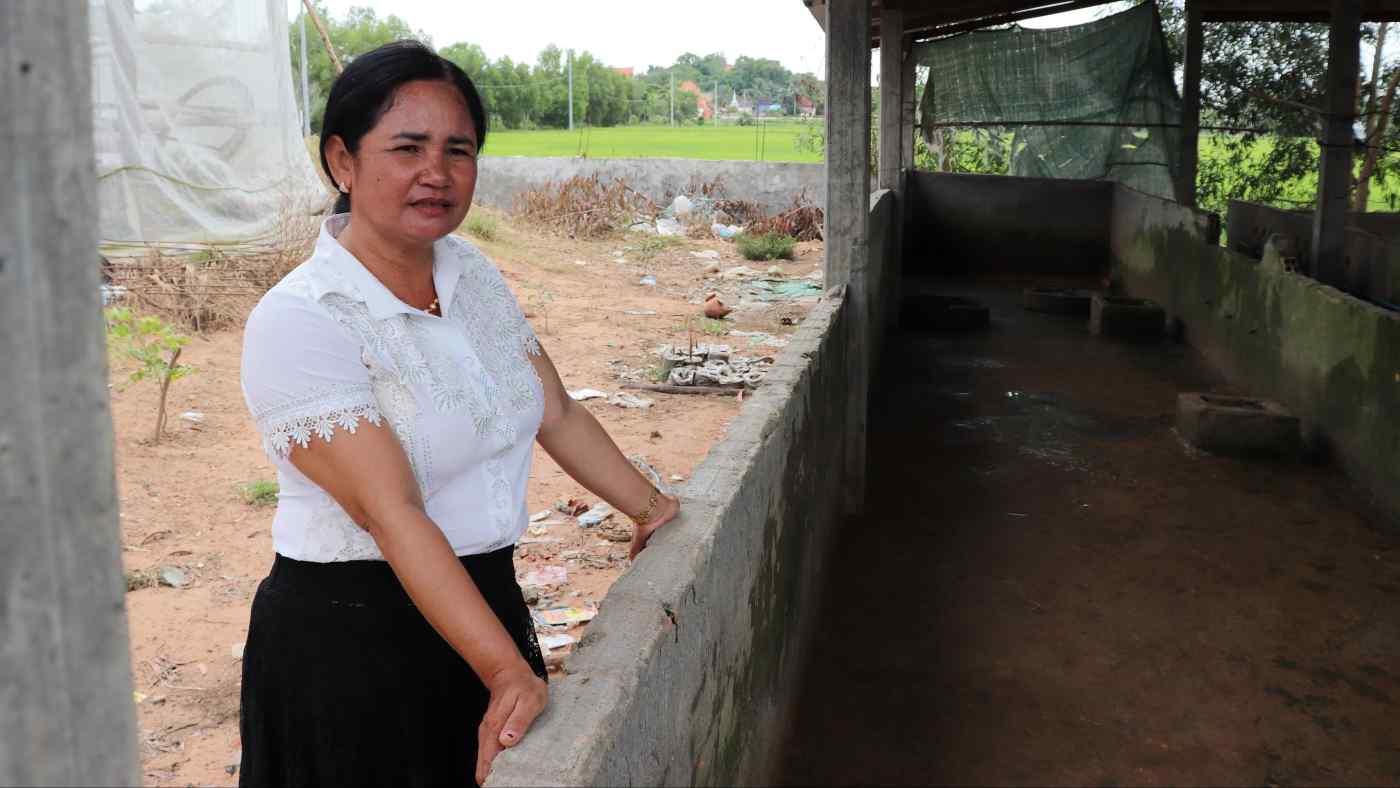 PHNOM PENH/BANGKOK/YANGON -- Before the African swine fever outbreak, Cambodian farmer Bun Kim Long had the largest herd in her village. Now, like many smallholder pig raisers across Asia, her business is in tatters.

Authorities in June ordered the destruction of the 48-year-old's 80 pigs after one tested positive for the highly-contagious disease.

Aware that ASF had hit Cambodia, Kim Long said she tried her best to prepare. But with a vaccine or cure likely years away, there was little she could do.

"We used mosquito nets to cover the enclosures," she told the Nikkei Asian Review at her house about 30 km south of Phnom Penh, Cambodia's capital. "But they had to try and prevent it spreading."

In the face of the millions of pigs already lost, herds like Kim Long's may seem insignificant. But, for the former garment worker and her husband, the animals were the product of a decade of hard work.

"We started with 10 and didn't have a farm, just had a small house, where we slept with the animals and children," she said. "I worked so hard to get where I am now, we built this with our bare hands. Now the business has lost so much. I want to cry I get so emotional." 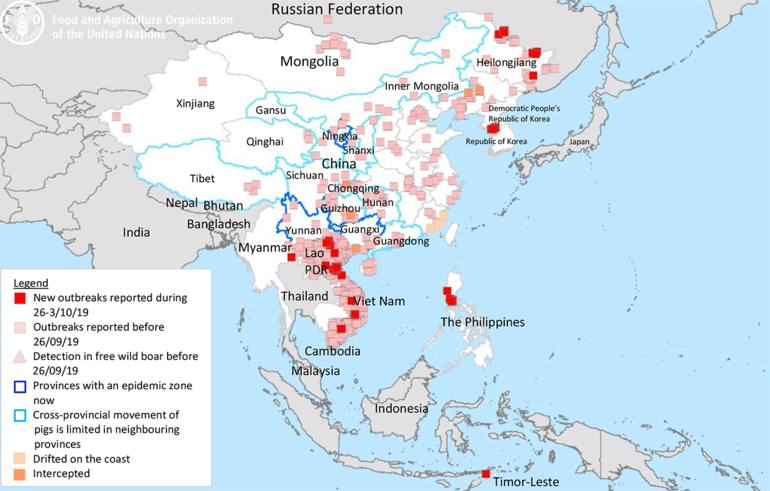 Similar stories can be heard across the region, where ASF is forcing a major shift away from smallholder or "backyard" farmers to commercial operations with the resources to deploy strict biosecurity measures.

A year after it was first detected in China, the virus continues to spread. With cases reported last month in South Korea, the Philippines and Timor Leste, the disease is present in at least 10 Asian countries. It has wiped out at least 5 million pigs in Asia, the United Nations estimated in August. Although not harmful to humans, ASF is nearly 100% fatal to swine herds.

More recent figures from Beijing, however, put the number much higher. China's total swine herd, more than 400 million before the outbreak, has fallen 38% from a year earlier, according to the country's Ministry of Agriculture.

All 63 provinces In Vietnam have been affected, with 4.7 million pigs culled to try to hogtie the spread, according to Reuters. Authorities are working to contain outbreaks in Laos and Myanmar.

In Yangon last week, government officials discussed plans to combat the virus, which include dispatching a task force to the country's border with China and readying laboratories for detection. Speaking at the workshop, independent expert Allen Bryce said 95% of Myanmar's pigs were raised in small-scale farms, where he said it was "more difficult to control."

Representatives from the Association of Southeast Asian Nations plus China and Mongolia, which has lost 10% of its pig population, met in August in Bangkok to discuss harmonizing their approach.

Following the meeting, the UN's Food and Agriculture Organization began working on a strategy to control the spread in Asia.

"Because of the nature of the virus, it's so stable in the environment and it doesn't wipe out [animals] immediately, we can see it will probably become an endemic situation in these countries," Filip Claes, the regional laboratory coordinator for the FAO's Emergency Centre for Transboundary Animal Diseases, told Nikkei at the agency's Bangkok office.

"We're looking at how can we somehow improve biosecurity at farm level but also at the chain level, from the feedlots to the farms, to the slaughterhouses... can we create clean changes within the pig sector that we know once we can ensure those clean chains that will give us food stability and food security." "Definitely one of the main concerns when you look at that transition, it's not only the ministry of agriculture that needs to be involved," he said. "You need a more holistic approach so people can move easily to other sectors to try and maximize their opportunities."

China -- which has about 26 million pig farming producers, with half of total pork production by small-scale farmers -- has introduced subsidies to large pig farmers, while offering 1,200 yuan ($180) compensation for each pig slaughtered due to ASF, according to reports.

In Cambodia, where authorities estimate 1.9 million pigs are owned by small-time farmers and about 810,000 by commercial piggeries, the government does not have a compensation scheme.

With authorities lacking resources, the private sector, largely dominated by Thai companies, has stepped in to help, holding education seminars about biosecurity and dispensing disinfectant to backyard farmers. 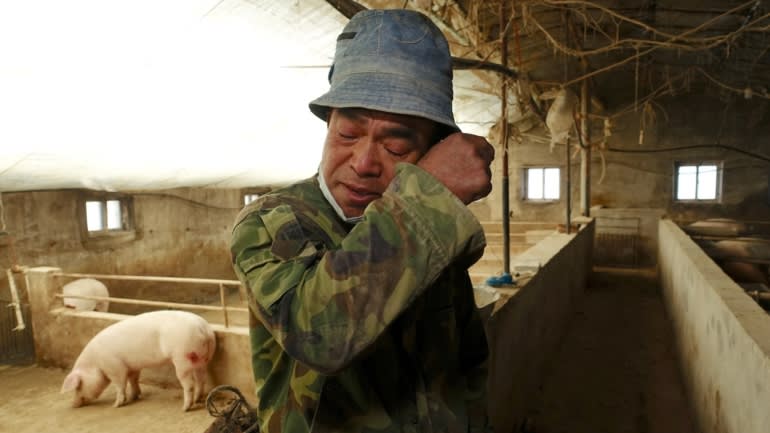 Pig farmer Han Yi wipes his tears on his farm at a village in Changtu county, Liaoning province, China, in January.   © Reuters

"Backyard farms are like a bomb," Laville said. "When they don't have good biosecurity, when an outbreak occurs, it's from the small farm but it will spread to commercial farms."

But despite the efforts, Laville said most would remain unequipped to deal with the virus, which has swept through the country's south east and threatens to continue.

While the UN has said ASF has caused "severe economic losses" putting a figure on the rising toll was difficult, said the FAO's Tago Pacheco. Reports have valued China's pig industry at $128 billion. In Vietnam, pigs make up about 10% of the agricultural sector. Both countries are facing severe shortages and rising prices.

Thailand's $3 billion pig sector, meanwhile, is on "red alert," with authorities last month reportedly culling 200 pigs amid efforts to prevent an outbreak within their borders.

Tago Pacheco said the FAO was currently working on a model to help estimate some of the damage wrought by ASF. Even then, the overall impact would be complex and wide reaching, he said.

What is for certain, however, is the cost will be too much to bear for many backyard farmers.

Back at her farm, Kim Long said that even if ASF was eradicated, she now lacks the capital to start again. Also an animal feed trader, she said she was now $25,000 in debt and borrowing further to make ends meet.

"I keep borrowing from everyone around me," she said. "I don't know what will happen in the future."