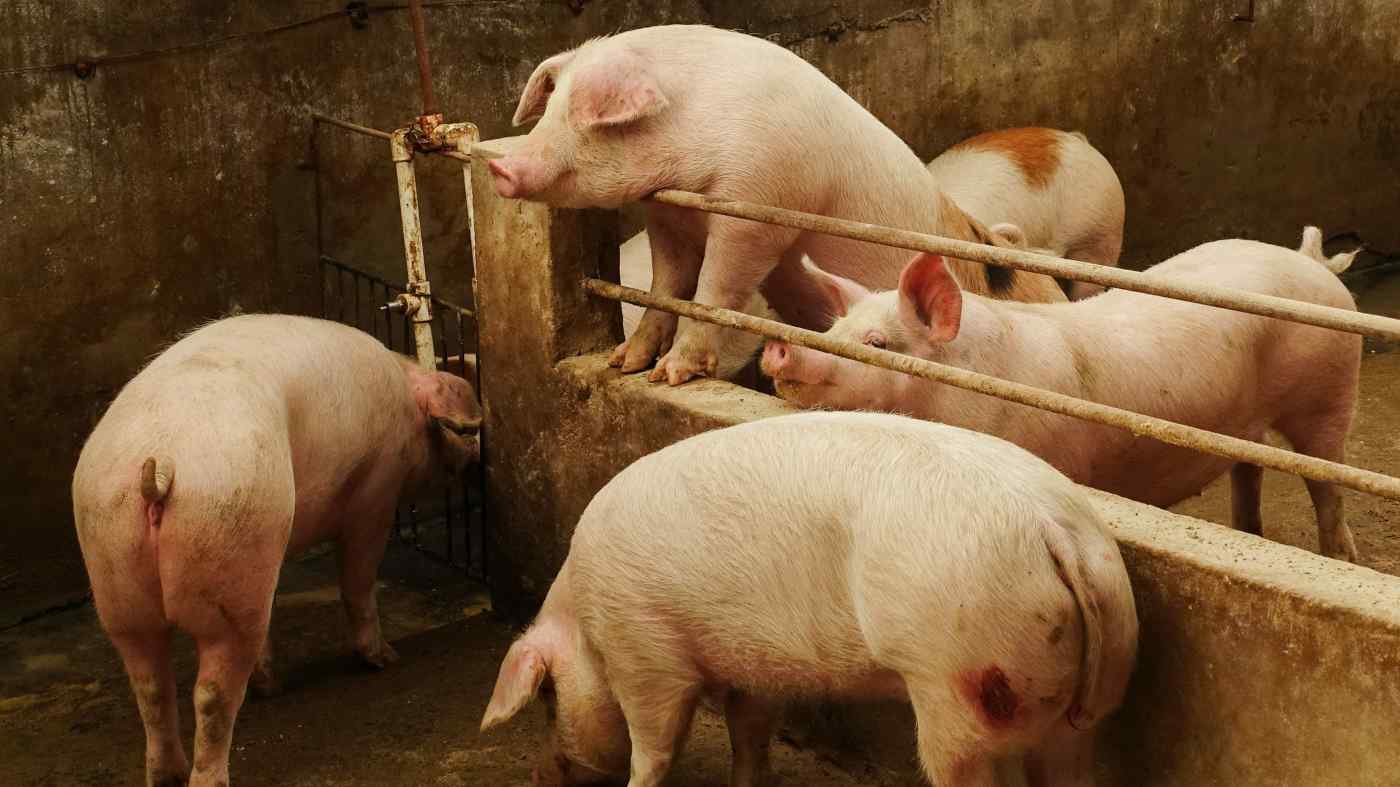 Just as China bore the brunt of its mishandling of SARS, experts say the country is poised to incur serious economic consequences from African swine fever that could last well into the next year or two.   © Reuters
CHRIS HORTON, Contributing writerJune 1, 2019 16:24 JST | China
CopyCopied

TAIPEI -- In late 2002, when the SARS virus began spreading in southern China, health authorities there waited until February 2003 to report the then-unknown contagion to the World Health Organization. China's inadequate and less-than-transparent initial response provided ideal conditions for the respiratory virus to spread globally, ultimately infecting more than 8,000 people and killing more than 700 people in 37 countries.

The current rapid spread of African swine fever throughout China and to its neighbors appears to be following a similar narrative. And just as China bore the brunt of its mishandling of SARS -- recording the most infections and deaths -- it is poised to incur serious economic consequences from African swine fever that could last well into the next year or two, according to experts.

"There will be macroeconomic impacts from the disease, first and foremost," said Even Pay, an agricultural analyst at China Policy, a strategic advisory firm in Beijing. "It will make food prices -- not just pork but also chicken and eggs and anything that consumers might choose as an alternative protein -- more expensive for the next one to two years. The impacts of this will be felt disproportionately by the poor and middle class."

ASF, as the disease is known, was first reported in China last August and is now present in all of its administrative regions. The current crisis will also drive inflation, Pay said, creating a drag on the country's economy at a time when growth was already slowing.

Analysts at Nomura International said in a May note that China's consumer price index for April rose 2.5% year-over-year largely due to rising pork prices, and that they are expecting the CPI to rise by more than 3% in some of the coming months. China's Ministry of Agriculture and Rural Affairs is projecting a 70% rise in the price of pork by the end of this year, which could be a conservative estimate. 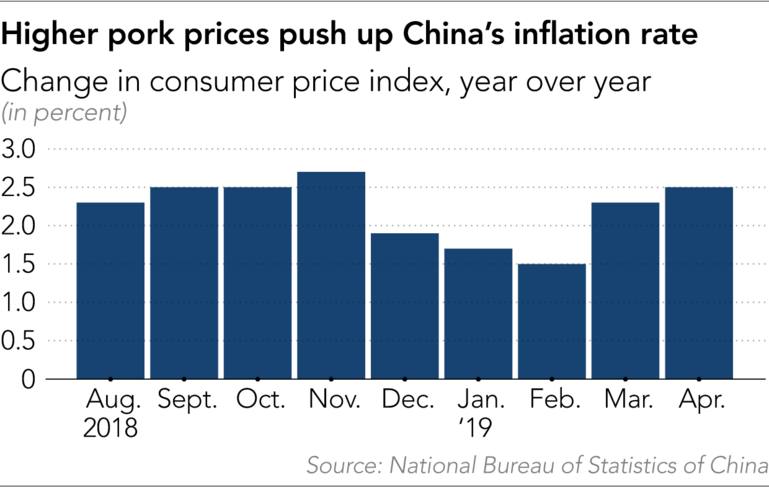 Given China's outsized role in the global economy, the consequences of ASF are likely to ripple into international markets, as demand for pig feed, and thus commodity grain and oilseed imports, falls in China and as demand for meat rises, Pay said. Chinese consumers are already feeling the pinch, and will continue to do so.

"Though officially only produce and vegetable inflation is hitting the consumer, unofficially pork prices are being hit hard by the large decline in pig stocks," Christopher Balding, an associate professor at Fulbright University Vietnam, told the Nikkei Asian Review. "With pig stocks down more than 20% officially due to ASF and more than 40% unofficially, the lack of supply is pushing up pork prices, which is a major component of the CPI inflation basket, as it is the primary protein of Chinese consumers."

The scale of losses expected to hit China's $128 billion pork industry is staggering. Researchers at Rabobank are estimating that this year China will suffer a 30% loss in pork production as a result of ASF. To put that into perspective, that 30% loss in production is equivalent to Europe's entire annual pork supply, and almost 30% larger than U.S. annual pork production.

China slaughters 700 million pigs annually, and an estimated 150 million to 200 million pigs have been affected in the country since the outbreak was first reported. Rabobank's researchers are predicting that a combination of switching to other protein sources as well as increased pork imports from markets such as the U.S., Europe and Brazil will be insufficient to offset the loss, predicting a net supply gap of nearly 10 million metric tons this year.

China's pork difficulties have come at a particularly inopportune time for its Communist government, currently locked in a trade war with the U.S. that shows no sign of a quick resolution. Prior to the spread of ASF nationwide, China had slapped retaliatory tariffs of 62% on U.S. pork exports. Beijing is unlikely to remove those tariffs, as such a move would be perceived as a sign of weakness.

The U.S. pork industry has seen both opportunity and cause for worry as China grapples with the outbreak. U.S. hog futures rallied last autumn when news of the outbreak in China first broke, topping out in November and then bottoming in late February, before rebounding in March when China made large purchases of pork from the U.S.

China's tariffs on U.S. pork have been more or less mitigated by a drop in pork prices stateside. Dennis Smith, a broker analyst with Archer Financial Services in Chicago, told Nikkei that pork prices for many of the key primal cuts -- hams, loins and butts -- were trading at 10-year lows last autumn. In late February, ham prices were back to 10-year lows, with loin prices trading at historical all-time lows, he said.

"U.S. pork prices are still inexpensive from a historical standpoint," Smith said, noting that current pork production is at a record high.

In mid-May, Chinese buyers canceled an order for 3,247 metric tons of U.S. pork, the biggest cancellation in a year, with American news media framing it as another hit on the American farmer due to the trade war. The cancellation came shortly after U.S. President Donald Trump threatened to hit China with a new wave of tariffs in response to China's major last-minute revision of terms of a deal that could have de-escalated the conflict between the world's two largest economies.

Smith said the cancellation was likely just a "statement" by China. "They still need to import very large amounts of pork from Europe, as well as the U.S.," he said.

As SARS -- or severe acute respiratory syndrome -- demonstrated before, viruses know no borders, and African swine fever appears to have spread from China to many neighboring countries after likely entering from Russia, which has been dealing with the virus since 2007.

China's first ASF outbreak was reported in August of last year in the north eastern province of Liaoning, with fewer than 1,000 pigs culled and local officials declaring the outbreak contained. Two weeks later a second confirmed case was reported 2,000 km away, in the central province of Henan. Given cross-border trade, tourism and the potential for wild boars to spread the virus, it may have been inevitable that ASF would affect countries on China's borders. Outbreaks have been confirmed in Vietnam, Cambodia and Mongolia, as well as the Chinese territory of Hong Kong, which administers its own economy. On Friday, North Korea confirmed an outbreak of ASF in a province bordering China, according to a report from South Korea's Yonhap News Agency.

The arrival of ASF has been especially painful in Vietnam, which has the highest per capita consumption of pork in the world followed by China.

Ironically, the virus was first reported in February, when Vietnam was celebrating the arrival of the year of the pig. By mid-March, outbreaks had been reported in the country's biggest pork-producing provinces and two million pigs had been culled by the end of May, at which point China had only officially reported culling one million, amid suspicions the actual number was much higher.

Rabobank is projecting that Vietnam, which in May mobilized its military in the fight against the disease, will lose 10% of its pork production.

Vietnam has not blamed China for its outbreaks, but it appears likely that its giant northern neighbor was the source of the virus. Speaking with the press in March, officials in Hanoi said that despite there having been outbreaks in Yunnan and Guangxi, the two Chinese regions that border Vietnam, "it is very difficult to identify the source of infection happening in Vietnam." Despite the cautious language, Vietnamese scientists have determined that virus samples from Vietnam and China were identical.

Both Japan and Taiwan have discovered cases of the ASF virus within their borders, while successfully preventing outbreaks, at least so far.

In April, Japan's Ministry of Agriculture, Forestry and Fisheries reported that tourists had brought infected sausages into the country from China. Prior to that, Taiwanese authorities reported the discovery of three infected pig carcasses that had washed up on the shores of the Taiwan-controlled island of Kinmen, which lies 5 km off of China's south eastern coast. Visitors flying into mainland Taiwan are subject to luggage searches and hefty fines if they are found to be bringing in pork products.

Elsewhere in Asia, South Korea, Thailand, Myanmar and Laos are on high alert for possible outbreaks.

China faces a major challenge in containing and eradicating the disease. Management of ASF requires extremely strict control of pig feed to exclude any infected material, eradication of wild boar as a route of transmission, and rapid diagnosis, slaughter and disposal of all animals where an outbreak is reported, as well as complete disinfection and deinsectization of a farm.

Once under control, one of the biggest outcomes of China's ASF epidemic will be a restructuring of its pig farming sector, Pay said. "Just about the only way for farmers and companies to guarantee they can eradicate the disease on their farms is going to be vertical integration," she said.

Pay explained that companies will need to breed their own piglets and likely produce their own feed, and staff may be required to live on-site to ensure their livestock are not coming into contact with outside pigs at home. Transportation will need to be strictly controlled.

"China's pig farms have already scaled up a lot in the past five years due to environmental regulatory pressure pushing smaller and less professionalized players out," she said. "Efforts to control this disease will do the rest."

That could lead to changes at the dinner table as well. Chinese consumers have long placed a premium on fresh pork that has not been frozen, Pay said. As a result, live pigs are often shipped long distances to slaughterhouses nearer to demand centers -- sometimes thousands of kilometers from the farm.

"This practice will be incredibly costly or maybe even impossible, in the context of ASF prevention and control," she said. "Controlling the disease might even shift this practice, and in the longer term, the preference for never-frozen meat may change."