Infant formula on a store shelf in Sydney. Many retailers in Australia still limit how much customers can buy.
FUMI MATSUMOTO and SHIN WATANABE, Nikkei staff writersJanuary 16, 2020 01:03 JST | China
CopyCopied

SYDNEY/DALIAN, China -- Chinese companies are gobbling up food producers and cattle ranches in Australia and New Zealand, sparking a backlash from alarmed locals and prompting governments to block some purchases.

"I am very unhappy about it," a 30-something Sydney resident said of China Mengniu Dairy's acquisition of baby formula maker Bellamy's Australia, announced in September. Chinese mothers buy Australian milk products because they "do not trust Chinese milk products," and for corporate China to own an Australian milk company is "disastrous" for the local industry, she said.

Mengniu's thirst for Bellamy's is evident in what it was willing to pay for the leading purveyor of organic baby formula and food. China's second-largest dairy company offered about 1.5 billion Australian dollars ($1.04 billion) for a target that reported net revenue of AU$266 million for the year ended June 2019. Bellamy's "leading organic brand position and ... supply chain are critical to Mengniu," CEO Lu Minfang had said. The acquisition closed that December.

Chinese investment in Australia's food and agriculture sector surged to AU$1.2 billion in 2016 from $95 million in 2013, and stayed high at AU$1.1 billion in 2017, data from KPMG shows. The inflow of capital slowed in 2018 but likely soared again last year, topping the 2017 level. 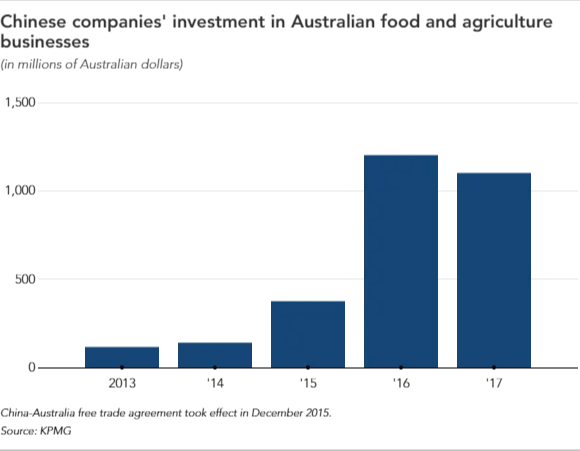 The shopping spree comes amid lingering Chinese consumer distrust of domestic food products. Ever since the fatal contamination of Chinese baby formula in 2008, Chinese consumers have favored foreign products they deem safer. Tourists and personal shoppers called daigou have been buying loads of baby formula in Australia, emptying store shelves and reselling the products for a profit back home.

"I imagine the air and grassland are clean in Australia and New Zealand, and cattle are raised in an excellent environment," said Jiang Nannan, a 33-year-old in Dalian who has fed formula from New Zealand's a2 Milk to her two daughters.

More than a decade since the tainted-milk incident, "I don't know if China's quality control system has improved," Jiang said.

Chinese companies also seek to tap the growing influx of products from Oceania after Beijing's free trade agreements with New Zealand and Australia took effect in 2008 and 2015.

For Chinese companies exploring acquisitions, the top criterion is whether they can bring the products to China, said Helen Zhi Dent, partner at KPMG Australia. The second is "how well they are ranked" in the Australian market and "brand image," she said, with "how good the business is" coming only after that.

Australian businesses do not necessarily see Chinese ownership as a negative. Many cattle ranches and other farms are run by families, and the only food producer able to compete on a global scale is New Zealand's Fonterra. With the Australian and New Zealand populations totaling only about 30 million, their chances of expanding operations alone are slim.

But China's insatiable appetite for businesses in the region has provoked an outcry among consumers and politicians. In November, former Deputy Prime Minister Barnaby Joyce expressed concern about a potentially "immense" toll of Lion's sale on the Australian economy. Cows on a farm near the town of Timboon, around 200 km southwest of Melbourne, Australia.   © Reuters

Local residents are particularly sensitive to Chinese takeovers of farmland. When Shanghai Pengxin Group reached a deal to buy 16 farms from an agribusiness family in New Zealand in 2012, a court there demanded a reexamination of government approval. The sale was permitted with certain conditions, such as a pledge to set up training facilities.

Pengxin planned more farm purchases, in New Zealand in 2015 and in Australia in 2016. But the plans ran into opposition from Wellington and Canberra, and the group eventually gave up.

The highest-profile case was the proposed sale of Australia's S. Kidman, the owner of 10 farms that span a combined 100,000 sq. km -- 1.3% of the continent's total land, or the equivalent of the entire area of South Korea. When the prospect of Kidman's sale to foreign ownership surfaced in 2015, Canberra blocked it, stating that a portion of the properties was in a restricted military zone.

Shanghai Pengxin, a suitor for the farms, scaled down its envisioned purchase to exclude the restricted land. But the Australian government again rejected it, noting the sheer size of the farms and saying the deal ran counter to the national interest.

Both Australia and New Zealand depend heavily on China, with the world's second-largest economy buying about 30% of the former's exports in value terms and around 20% of the latter's. Yet national security tensions with Beijing persist.

Chinese companies "assumed that federal and state government approvals" for initial investments were sufficient to move forward "with aggressive expansion plans," said an official at the Australian arm of public relations agency Powell Tate. A "lack of understanding of Australian politics, political institutions and structures, of the importance of local government, and of local community sensitivities" made the companies seem like juggernauts to be feared.