Japan says 'no' to strawberry and grape copycats Amao strawberries are among the natively developed fruits whose seeds and seedlings are banned from being taken out of Japan.
DAISHI CHIBA and ALEX FANG, Nikkei staff writersApril 10, 2021 06:39 JST | Japan
CopyCopied

TOKYO/NEW YORK -- Crunchy, fragrant and sweet, Japan's Shine Muscat grape went through more than 15 years of testing and selection before it was finally released as a new breed.

But the expensive grape variety is now increasingly found in vineyards in South Korea and China and sold at a diluted price.

Shine Muscat, "one of the most expensive fruits around, is now made available at a lesser price by its neighbor, Korea" read a product description of South Korean-grown Shine Muscat grapes on Momobud, a Singaporean online fruit retailer.

"It's similarly fragrant and sweet as its Japanese counterpart and doesn't lose out in any bit!" it adds. "Try it and you won't regret!"

In mainland China, the breed is commonly available by the moniker Sunshine Rose, Shine Jade or Sunny King at a third of the price of its Japanese original, or often less.

The Japanese government, led by Prime Minister Yoshihide Suga -- the son of a strawberry farmer in Akita Prefecture -- is moving to put a stop to such copycats. 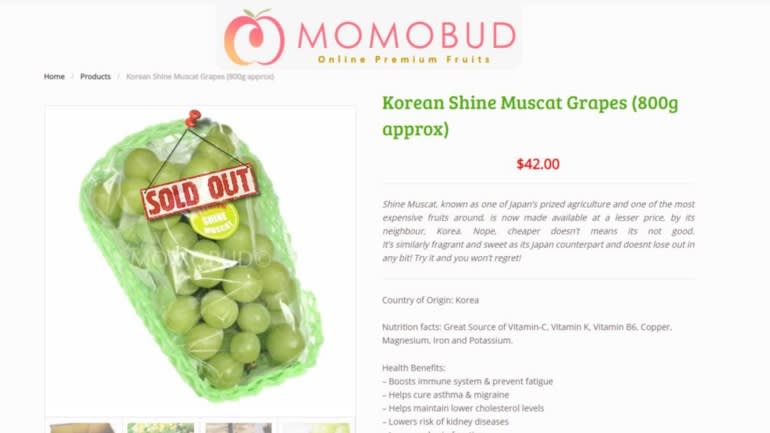 A screenshot of a page from Singaporean online fruit retailer Momobud.

Japan's Ministry of Agriculture, Forestry and Fisheries released Friday a list of 1,975 varieties of natively developed fruits and vegetables whose seeds and seedlings are banned from being taken out of the country.

This measure followed the partial implementation on April 1 of the amended Plant Variety Protection and Seed Act. The legislation aims to better safeguard intellectual property pertaining to new seed development.

The law allows seed developers to designate to which countries or territories a registered seed variety can be transferred. For instance, if Thailand and Vietnam were the designated countries, improperly transporting the seeds or seedlings to anywhere else would trigger penalties for violating intellectual property rights.

But none of them had designated countries, meaning none of the named seed varieties can be taken out of the country as a general rule.

Much to the chagrin of Japanese farmers, some of the cases do not technically qualify as agricultural espionage.

The Geneva-based International Union for the Protection of New Varieties of Plants (UPOV), which administers an international system of intellectual property rights protecting plant breeders, stipulates that a breeder must register in an overseas country within four years of the product launch to be protected.

The Shine Muscat was not registered abroad within the four-year period and thus was free to be taken out of the country.

But agricultural espionage is far from confined to so-called luxury produce. Across the Pacific, the U.S. has also struggled with its fair share of seed theft -- in one such case, of corn.

In 2016, a U.S. court sentenced a Chinese national to three years in prison for conspiring to steal seeds of corn -- for which China has a huge demand to use as livestock feed -- from Pioneer and Monsanto.

The Federal Bureau of Investigation, which is still seeking information on the case's five other alleged conspirators, says the estimated loss on one such line of seed is approximately five to eight years of research and a minimum of $30 million.