Japanese farms are struggling to attract workers, and many farmers set to retire do not have successors. (Photo by Yuichiro Takagi)
TADANORI YOSHIDA, Nikkei senior staff writerAugust 4, 2019 18:00 JST | Japan
CopyCopied

TOKYO -- What does one of the world's leading automakers have in common with a farm in the countryside? Quite a bit, as it turns out.

Toyota Motor has brought its successful kaizen philosophy, which focuses on continuous improvements in efficiency, to agriculture. The company launched its Hosaku Keikaku service -- meaning a plan for a bountiful harvest -- in 2014, and it has spread to 90 farms across the country.

It could be key to helping Japan's aging farmers in the face of a severe labor shortage. Agriculture has a particularly difficult time attracting workers, in part due to the long hours and the perception that farmers do not have flexibility in taking time off.

But an incorporated farm named One in the city of Kanazawa on the country's northwestern coast was able to implement a five-day workweek earlier this year after introducing Toyota's service.

There are two main parts to the system. One is a cloud-based system in which workers collect data about individual fields and rice paddies using smartphones. The other involves employees from Toyota coming to farms and identifying practices that are wasteful or inefficient. Simple changes like painting arrows on the floor helped improve efficiency at One.

At One, things started with clearing clutter from the workplace. Equipment that had been left on the floor was placed on shelves with spaces labeled for each tool. Casters were affixed to boxes filled with lotus roots, and direction arrows were painted on the floor. These simple steps made the work easier and safer.

After that, attention turned to core farm management. One of the most effective changes was altering how orders came in. Previously, if for example the farm planned to harvest 300kg of lotus root and an extra order for 50kg came in late, the field workers would need to rework their plans, which created stress and confusion. On Toyota's advice, the farm started asking customers to submit orders two days in advance.

Data management also helped things run more smoothly. Demand for lotus root surges in December, when people prepare traditional dishes for New Year celebrations. Before introducing Toyota's system, One would be overwhelmed with orders that exceeded their harvest capacity. Workers now harvest ahead of time based on the previous year's order data. The farm also installed a large refrigerator to store crops waiting to be shipped. 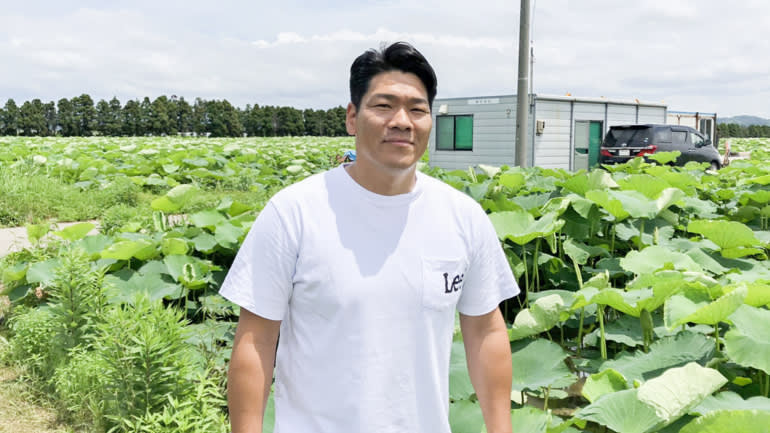 These improvements created enough breathing room for workers to take more days off. After shifting schedules around, the farm was able to introduce a five-day workweek, and shifts are generally limited to eight hours.

"We didn't even know what we were putting in overtime for," said Yoshitaka Miyano, One's vice president, recalling the days when working extra hours was just part of the routine.

An important point in the process was shifting the goal to higher hourly wages, rather than more days off. Under the new goal, the farm sought to boost revenue by limiting working hours and expanding operations. Miyano and other staff came to enjoy identifying problems that had not been pointed out by the Toyota staff.

Many Japanese farms lack successors as aging farmers start to retire. Farms have traditionally been family businesses that relied on labor from family members. But with fewer people interested in agriculture, farmers now need to hire workers to keep operations going. That means taking some of the toil out of farming to make it a more attractive career option.