Fall armyworms spread over entire region in just a year, risking up to 20% of crops 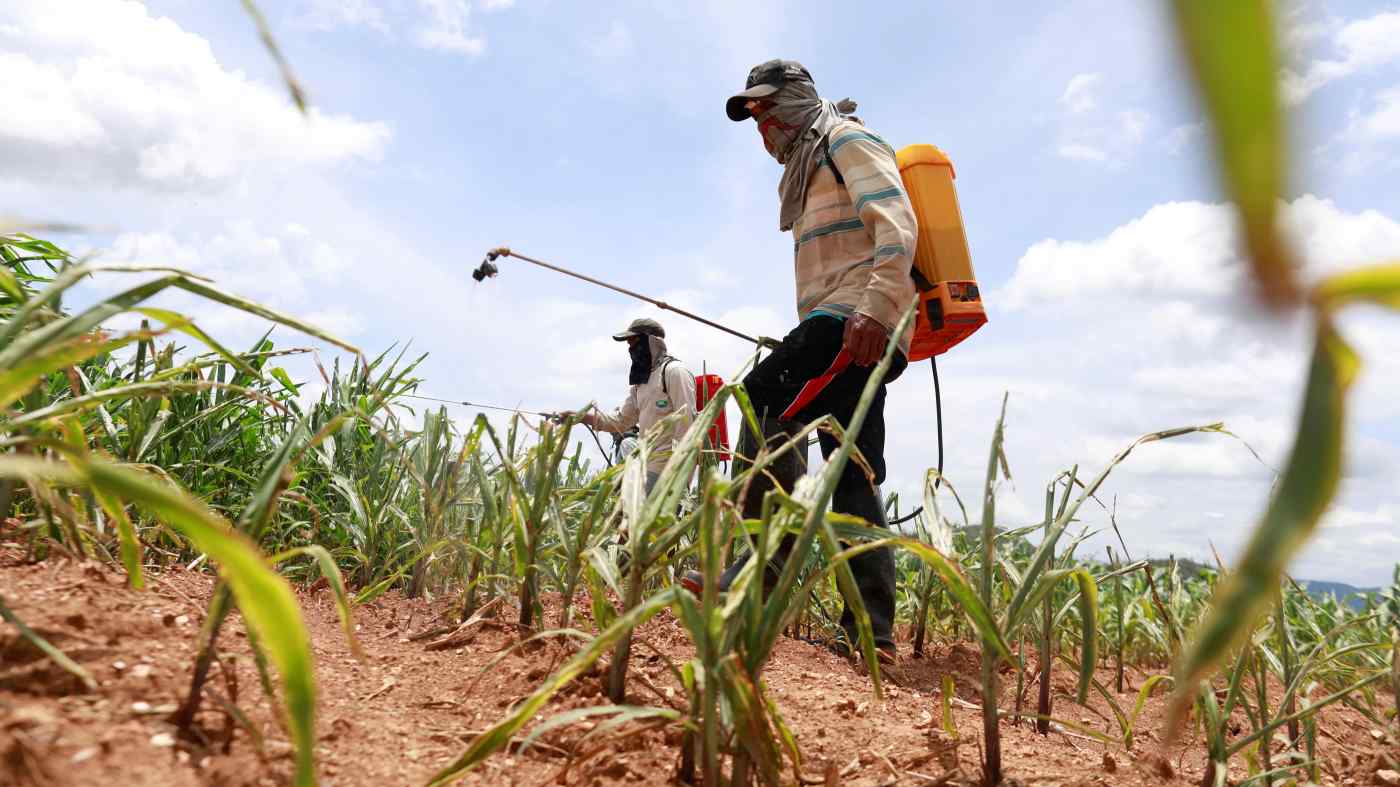 BANGKOK -- An invasive pest native to the Americas is feasting on corn fields across a wide swathe of Asia, raising concerns about a likely drop in cereal production in 2019 harvests.

By early July, 10 countries including India and China had detected the presence of fall armyworms, the larval stage of the armyworm moth, native to tropical and subtropical regions of the Americas.

Japan is this month the latest country to confirm the larvae's presence, with corn fields in Kagoshima Prefecture affected. This comes a year after caterpillars were first found in India's Karnataka state; these rapidly spread across southern India and to South Asian neighbors. The insects passed through Southeast Asia on their way to Northeast Asia.

"The fall armyworm has been spreading fast in Asia due to its capacity to fly long distances and to catch wind streams," Marjon Fredrix, an agriculture officer with the plant production and protection division of the Food and Agriculture Organization (FAO), a United Nations body, told the Nikkei Asia Review.

"That seems to be the main mechanism of its spread," she said. Adult moths can fly over 100km in a night and a female moth can lay 1,000 eggs in her lifetime.

More perplexing for experts is how the insects arrived in Asia in what was a second continental leap from their native habitat. The moths and larvae were detected in Central and West Africa in early 2016. Since then, they have spread across sub-Saharan Africa. Experts suspect trade and travel routes have facilitated the spread.

According to some estimates, the economic toll in the 12 African countries initially affected by the fall armyworm ranges from $1 billion to $3 billion, which is less than predicted in a report a year after the pests were found on the continent.

The 2017 report by the Center for Agriculture and Bioscience International, a U.K.-based nonprofit intergovernmental network focusing on agriculture, had predicted annual damage of over $6 billion per year for the impacted countries.

"Fall armyworm in Africa has the potential to cause maize yield losses ranging from 8.3 to 20.6 million tonnes per annum, in the absence of any control methods, in just 12 of Africa's maize-producing countries," the report says.

Damage expectations vary as Asia enters another corn-growing season, according to the FAO and agriculture ministries in the affected countries.

The FAO predicts crop losses of 1.2% to 10% in some countries, but 10% to 20% in others. According to the FAO, Sri Lanka saw 41,000 hectares affected by February, and China reported 333,000 hectares of corn damaged by June. Meanwhile, the Cambodian government said it had lost 10,000 hectares by June.

"Preliminary estimates suggest that the armyworms may cause more than 200 million yuan ($ 29 million) of losses in agriculture [in] Yunnan without effective control," Gui Furong, a professor at the Yunnan Agriculture University, told Xinhua, China's state news agency.

In parts of Thailand, corn farmers are waking up to fields devastated by the caterpillars, which they are being urged to contain by organic means rather than with pesticides.

Opposition politicians have turned up the heat on Prime Minister Prayuth Chan-ocha, and warned of heavy losses in the agriculture sector.

"This can impact the production in other sectors, such as the processed animal food industry," said Sudarat Keyuraphan, chief adviser of Pheu Thai, the main opposition party. Thai corn is largely used for animal feed in the multibillion dollar processed food sector.

The nature of agriculture in many parts of Asia adds to the vulnerability of farmers, Sandip Das, an Indian agriculture expert attached to the New Delhi-based Indian Council for Research on International Economic Relations, told Nikkei. "In South Asia and Southeast Asia, agriculture is in the hands of smallholders, so it becomes a challenge to deal with new pests that spread rapidly."