KUALA LUMPURAirAsia's phenomenal growth is far from over. The superstar of cheap air travel in Asia is already the Association of Southeast Asian Nations' largest budget airline by fleet size after having leveraged its hub-and-spoke model to connect numerous cities. Now, as the region's middle class grows, the airline is eyeing new routes and markets, including China.

"We saw ASEAN before ASEAN saw us," says Tony Fernandes, the airline group's chief executive. AirAsia's modest start with just two aircraft in 2002 happened to coincide with the region's economic integration under the ASEAN Free Trade Agreement. AirAsia immediately saw the huge potential: an area with a population of over 600 million, with growing economies but poor connectivity. 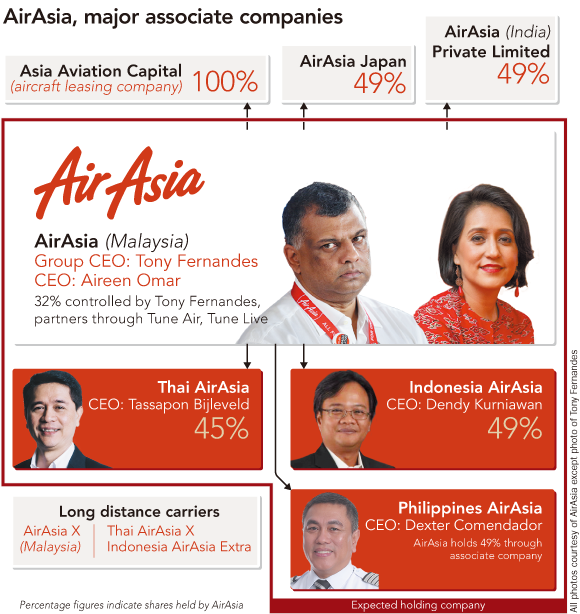 "Our timing was great," Fernandes noted, reckoning that the airline would not have taken off 20 years earlier. "Luck played a big part, but we took advantage of it." Marketing his airline under the banner "Now everyone can fly," AirAsia democratized air travel with its short-haul, no-frills service, charging for everything from baggage to meals in return for low fares.

As demand for budget air travel increased, Fernandes expanded into Indonesia, the Philippines and Thailand, setting up affiliate airlines as a way to skirt the countries' strict regulations that prohibit full foreign ownership of companies. This arrangement has worked well, allowing each airline to grow organically using local talent.

Thai AirAsia -- the group's largest affiliate by fleet size -- is led by Tassapon Bijleveld, who built a career in the music industry like Fernandes. "If you can manage international artists like Madonna, you can manage anyone," Tassapon said, when asked how he could run an airline without prior experience.

The Thai affiliate flies to over 52 destinations from six hubs, serving three key markets in Indochina, China and India. Tassapon says he will focus on building more routes to Indochina and India after successfully opening up routes to China on a bilateral, open skies policy. To boost ancillary income, the airline is planning to launch predeparture duty-free sales online next year, capitalizing on the strength of its major shareholder, King Power, Thailand's leading travel retailer.

Indonesia AirAsia is headed by Dendy Kurniawan, a Fulbright scholar with experience in the public and private sectors. After cutting capacity drastically the past two years as the company struggled, Kurniawan wants to develop the existing hub in Medan to complement the Jakarta, Bali and Surabaya hubs.

"It is the time to start our growth story again this year," says Kurniawan, noting that there is an overemphasis on Bali as a tourist destination. There were about 12 million foreign visitors in Indonesia last year, of whom five million went to Bali.

The government hopes to attract 20 million visitors in 2019, and Kurniawan says AirAsia can play a significant role through its domestic hubs that already connect to over 100 destinations in nearly 20 countries.

Similarly, Philippines AirAsia is also stepping up efforts to create new tourist destinations in the country. Its latest route will link Kuala Lumpur to the southern Philippine city of Davao starting Nov. 21.

"Our goal within AirAsia is to share each other's tourist spots by connectivity," said Dexter Comendador, chief executive of Philippines AirAsia. The company is aggressively targeting young millennials across the vast 7,000-island archipelago via social media.

Comendador, a decorated pilot, is also pressing the government for more landing rights and tax concessions. He said authorities have given approval in principle for the airline to resume international flights from Clark International Airport northwest of Manila. The airline originally started in 2012 at Clark before moving to Manila's Ninoy Aquino International Airport after acquiring Zest Airways, obtaining the local airline's landing rights at the strategically located airport.

In Malaysia, where the group is headquartered, AirAsia controls about 50% of both the domestic and international markets. Flight information boards at Kuala Lumpur International Airport 2 display predominately AirAsia flights. Last year, 27 million passengers used the terminal, which was specially built for budget carriers and can handle up to 45 million travelers annually.

Yet, AirAsia still feels it has a long way to go, according to Aireen Omar, chief executive officer for the carrier's Malaysian operations.

"Kuala Lumpur is the low-cost carrier hub for the region, like a Dubai of Asia," she said, adding that there is still room for growth in the domestic market, linking inland areas to bigger cities around the country and abroad. Part of Omar's job is to promote gender equality. According to Tony Fernandes, there are about 70 female pilots and at least an equal number of female engineers in the group.

"We run a very flat structure," Fernandes told a business forum in the Philippines on Jul. 21. Employees are encouraged to approach him with ideas, either concerning themselves or the airline.

Now that the company is recognized across the region, AirAsia is mulling vertical integration by launching the equivalent of China's Alipay mobile payment system to spur bookings and predeparture duty-free shopping.

AirAsia is also planning to group all affiliates under one holding company to highlight its strength and streamline procedures for operational efficiency. Initially, it is considering integrating its Malaysian, Indonesian, Thai and Philippine operations under a new company for future listing.

Negotiations are also underway for a joint venture in China, where Fernandes says he welcomes any form of collaboration with local airlines to tap the country's largely untouched budget market. "I believe in partnership," he said.

AirAsia will remain centered in the ASEAN region, but wants to continue expanding further into Asia. The market is big and the future is bright, so it is doubtful that the competition will just sit idly by.