Andy Yee: Japanese companies not yet prepared for next tech wave After transforming many industries, the digital disruption wave has finally hit the factory floor. First introduced by Germany in 2013 as "Industry 4.0" to promote the digitization of manufacturing, the concept of a Fourth Industrial Revolution has caught on among manufacturing powers. The U.S. brands its strategy as "the Industrial Internet." Japan, too, jumped on the bandwagon last year with its "Industrial Value Chain Initiative."

The possibilities of transforming physical products with digital capabilities are limitless. Countries that lead this industrial change stand to make significant economic gains. U.S. networking company Cisco estimated that the "Internet of Things," the growing network of digital devices that communicate with each other, will create $14.4 trillion in global corporate profits between 2013 and 2022, with Japan standing to gain $761 billion of this.

With its proud history of technology and innovation, Japan seems well positioned to lead on this new path. On a closer look, however, things are less certain. The internet economy's concepts of service and ecosystems are alien to Japanese manufacturers, steeped in their success during the Third Industrial Revolution. The problem for Japan is not technology, but mindset.

One issue is the shift from products to services. With 21 billion products set to be wirelessly connected by 2020, the enormous amount of data generated will form the basis for new services. Networked production systems will enable mass customization, offering manufacturers the flexibility to respond to personalized market needs and making things matter less and knowing your customers matter more.

"We're moving from a push-driven model to a pull-driven model, with the consumer becoming much more of a driver in the supply chain," said Jagjit Singh Srai, head of the University of Cambridge's Centre for International Manufacturing.

Japan's record in services transformation is dismal. The country is well known for its single-minded monozukuri craftsmanship culture of building near-perfect hardware. But this linear thinking makes it difficult to adjust to a customer-centric model that emphasizes software and services.

A case in point is the decline of Japan's electronics industry, which saw its share of information and communication technology exports among Organization for Economic Cooperation and Development members decline from 20.6% in 1996 to 12.1% in 2008. According to the World Bank, services accounted for 5% of global information and communication technology value creation in 1996 and 22% in 2009. Yet services accounted for less than 2% of Japan's such exports in 2009.

The shift from integral production to open ecosystems is also awkward for of Japan's electronics industry. In the Internet economy, companies thrive when others create services and applications on top of their platforms. Apple's iOS and Google's Android operating systems are clear examples.

In industry, networked production platforms will lead to the democratization of manufacturing for countless smaller companies. The biggest winners will be the incumbents that offer these platforms. Siemens' Digital Enterprise and Trumpf's Axoom are the precursors of this revolution.

Because of the need to interact with a large number of players, such platform thinking calls for an ecosystem mindset that spans borders, industries and cultures. This will not come easy to Japanese incumbents. Their dominance thus far has often relied on proprietary technology and a "black box" approach. Furthermore, they operate within keiretsu networks of interlinked companies that favor familiar business partners. This strategy, though successful in the past to foster incremental advances in production processes, is a poor fit for the Internet era, which stresses openness, diversity and dynamism.

Like the Internet economy, the emerging industrial innovation model will be globally collaborative, with customer insights, product ideas, talents and strategic allies coming from all over. Japan has been slow to embrace this transformation, leading to the so-called Galapagos phenomenon in which Japanese manufacturers develop high-quality products with excessive functions and high prices purely for the domestic market.

It is no wonder that a recent survey of 300 experts from manufacturing companies and technology suppliers by management consultancy McKinsey revealed that only 34% of Japanese respondents felt well prepared for Industry 4.0, versus 83% of those in the U.S. and 57% of German interviewees.

Stephen Elop, former chief executive of Nokia, said in a speech at a time the company's phones were quickly losing market share to iOS and Android ones, "Our competitors rely not on advanced devices but on a strong ecosystem."

The Fourth Industrial Revolution is all about connectivity and networking. Japanese companies need to urgently equip themselves with the requisite soft skills and a global mindset if they are to survive this revolution. The government, too, has an important role to play. A labor market that is attractive to foreign talents, a more open education system, a higher level of English proficiency and stronger computer science education are all profoundly needed to nurture Japan's next generation of globalizers in the Internet era.

Inventing the future will require Japanese companies to escape the constraints of their previous model of success. If they prove capable of embracing a world of disruptive change, the Fourth Industrial Revolution will not be the beginning of the end but the end of the beginning of Japan's industrial renewal. 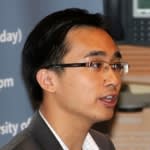 Andy Yee is the public policy director for Visa for greater China and was previously with Google as an Asia-Pacific public policy analyst. This article expresses only the author's personal view.