A man looks at the screen of his mobile phone in front of an Apple logo outside its store in Shanghai in July.   © Reuters

TOKYO -- Apple's revenue in the greater China region fell 10% on the year in the April-June quarter, marking the sixth straight quarter of declines, the company said Tuesday. 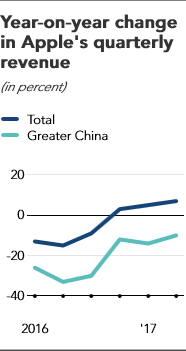 Greater China accounted for $8.0 billion of Apple's sales. It is the only major market that saw revenue fall in the latest quarter among the five where Apple operates. Sales in the Americas climbed 13%, those in Europe were up 11%, Japan sales rose 3%, and those in the rest of Asia-Pacific increased 15%.

At a news conference on Tuesday, CEO Tim Cook said the decline in revenue in China was mostly due to changes in exchange rates. "If you look underneath the numbers, mainland China was actually flat, year over year, during [the latest quarter]. And in constant currency terms, we were actually up 6% in mainland China," he said.

But Apple faces other challenges, including fierce competition in China. According to technology market research specialist Canalys, Chinese smartphone shipments fell 3% to 113 million units in the April-June quarter. Apple was fifth by sales in the country, following Huawei, Oppo, Vivo and Xiaomi.

Apple recently halted sales of virtual private network apps at its Chinese online store. VPNs are used to avoid censorship in countries with tight restrictions on internet use.

During the news conference, Cook said: "Earlier this year, [the Chinese government] began a renewed effort to enforce that [VPN regulation] policy, and we were required by the government to remove some of the VPN apps from the App Store that don't meet these new regulations. We understand that those same requirements are on other app stores, and as we checked through that, that is the case."

Cook added that "we strongly believe that participating in markets and bringing benefits to customers is in the best interest of the folks there, and in other countries as well. And so we believe in engaging with governments, even when we disagree."