As copier sales dive, Konica Minolta gets into genetic screening TOKYO -- Konica Minolta's decision to buy a U.S. genetic diagnostics company -- its largest-ever acquisition -- is the digital technology company's boldest strategic move since a merger brought it into being in 2003.

Konica Minolta on July 6 said it is partnering with the public-private Innovation Network Corp. of Japan to buy Ambry Genetics, based in the U.S. state of California.

It is a bet on a diversified future now that Konica Minolta's core office equipment business is struggling in a shrinking market.

Shoei Yamana, president and CEO of Konica Minolta, on July 6 told reporters that his company is not only making a full-scale foray into the genetic-testing business but expects it to bring in over 100 billion yen ($879 million) in sales in five years.

The Japanese maker of imaging products will shell out 60% of the money needed to acquire the U.S. company; the Innovation Network is providing the remainder.

Konica Minolta plans to gradually raise its stake in Ambry according to the company's earnings performance. It has $200 million on hand for this purpose.

Ambry, founded in 1999, specializes in cancer screening but offers genetics-based testing for various diseases in the U.S.

In addition to providing Ambry's existing services in Japan, Konica Minolta will offer new services by combining Ambry's clinical diagnostics with its own medical imaging capabilities. These include cutting-edge immunostaining technology, which utilizes fluorescent nanoparticles to detect and analyze proteins behind cancer and other specific diseases.

The massive acquisition will beef up Konica Minolta's health care business, which accounted for about 10% of the imaging company's sales in the year through this past March.

Konica Minolta's mainstay health care products are digital X-ray diagnostic imaging systems for hospitals. The company is trying to expand the range of its health care offerings by adding genetics-based testing and other solutions that support the development of new drugs. 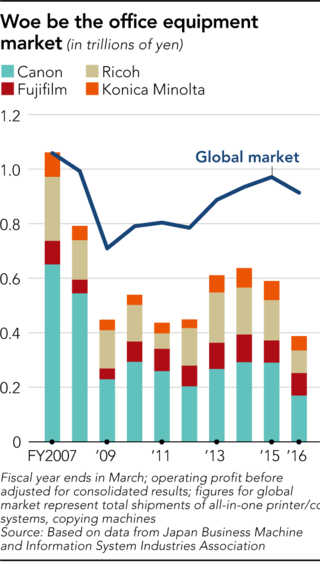 The acquisition is a response to the bleak outlook for office equipment, which contributes around 80% of Konica Minolta's overall sales.

The global recession that began in 2008 prodded most companies in industrial nations into serious cost-cutting mode. One casualty was printers.

Ever since, many makers of products like copiers and printers have been struggling to stay profitable.

However, the acquisition of Ambry, which expects to have logged an operating profit of about $45 million on sales of about $230 million for the last fiscal year, will not fully offset Konica Minolta's declining office equipment sales.

That leaves restructuring. Here, too, the office equipment makers' efforts have done little to boost their profitability.

Alarmed by the market gloom, Canon has been seeking to widen the range of its businesses. In 2015, it acquired network video surveillance leader Axis Communications; last year it bought Toshiba Medical Systems.

In contrast, Ricoh has been going through a rough patch as it has failed to diversify.

Konica Minolta's share price is languishing at around half of its all-time high, reached in 2007, and is sitting near where it was 14 years ago when Konica and Minolta merged.

Now it has a California dream: That the Ambry Genetics purchase lifts its bottom line and share price.