Asean's 'unbanked' getting equipped with e-wallets

SINGAPORE -- Talk of a cashless society may seem premature for much of Asia, where millions have yet to open their first bank accounts. But one Singaporean startup wants to usher the masses straight into the digital payment era. A man uses one of Numoni's streetside machines in Singapore.

Numoni, founded two years ago by former Visa International executive Norma Sit, is rolling out an e-wallet service. The goal is to provide an easy way for Southeast Asia's "unbanked" migrant workers to remit money and handle other transactions.

The company -- whose name is a play on the words "new money" -- already operates vending machines in Singapore that let individuals buy mobile phone airtime for friends and families in their home countries. Now Numoni is building on its relationships with the region's telecommunications companies to offer the e-wallet service, which is tied to cellphone numbers.

According to Sit, Numoni's CEO and managing director, the idea came from a common practice in Southeast Asia whereby small retailers accept mobile phone credit in lieu of money. When a migrant worker pays for airtime on a cellular network using a Numoni vending machine, the recipient receives a text message when the purchase goes through. Instead of using the airtime, recipients sometimes barter with retailers to exchange the minutes for cash or goods.

With cooperation from carriers such as Indonesia's XL Axiata, the Philippines' Globe and Smart Communications and Bangladesh's Grameenphone, Numoni's new e-wallet service allows prepaid credit to be used to pay bills directly. Customers can also transfer credit to other users' accounts -- all without banks getting involved.

Sit said credit can be stored in most Asian currencies as well as U.S. dollars and euros.

At the end of last month, Numoni set up vending machines in Singapore and Malaysia that both sell airtime and transfer credit. The service is to arrive in Indonesia this summer, followed by Vietnam and Myanmar. 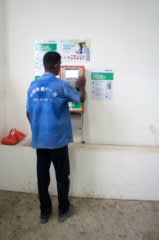 This Numoni machine is installed in a dormitory for construction workers in Singapore.

The company chose these markets because they either have vast armies of foreign workers or are home to families that rely on remittances. In Singapore, 1.3 million foreign workers account for one-fifth of the city-state's population. Many hail from countries such as Malaysia, China, India, Bangladesh, the Philippines and Indonesia.

In Indonesia, just 20% of adults had bank accounts as of 2011, according to World Bank data. In the Philippines, the figure was 26%, while in Vietnam it was 21%.

Sit says the e-wallet software that Numoni machines use will be written to adhere to financial industry standards for most countries. This way, as approvals are granted in new jurisdictions, it should be easy to expand the service.

Numoni is one of many companies that sell mobile airtime remotely. Tranglo, based in Malaysia, offers a similar service via its website and has expanded to Africa and the Middle East through partnerships with other companies.

But Numoni's proprietary vending machines set it apart from the competition, since they are available to people who cannot easily get online. Singapore is dotted with about 80 Numoni machines for topping up cellular minutes for phone numbers elsewhere in Southeast Asia. Each machine costs around $5,000 and can be rented or bought from Numoni, which takes a cut of the transactions.

In early March, Numoni also joined the first wave of companies to set up vending machines for Bitcoin, the cryptocurrency.

The collapse of Mt. Gox, once the world's largest Bitcoin exchange, has stirred fears about the digital currency's reliability and prompted governments to take action. Singapore's monetary authority said in March that it would start regulating the use of bitcoins, which are "mined" through a computer algorithm.

Nevertheless, Sit is optimistic about Bitcoin's future. "We believe that a borderless global digital voucher product is inevitable," she said. The startup founder expects the spread of digital money to continue gaining pace as more of the world's consumers get their own mobile phones. So far, four Numoni machines in Singapore have been adapted to sell bitcoins.

Sit said Numoni has no plan to expand the Bitcoin service beyond sales. Numoni is focused on enabling simple, low-value transactions by Asians who lack access to regular banking services.

"We are not operating in a space where we enable the rich to send money out of countries," Sit said.