Governments want to open their economies to competition -- and growth

TOKYO -- From the Philippines to Hong Kong to India, Asian governments are trying to boost economic development by cracking down on cartels, bid rigging and other anti-competitive business practices.

In March, the Hong Kong Competition Commission took its first legal action toward punishing violators of the region's competition law. The law took effect in December 2015. 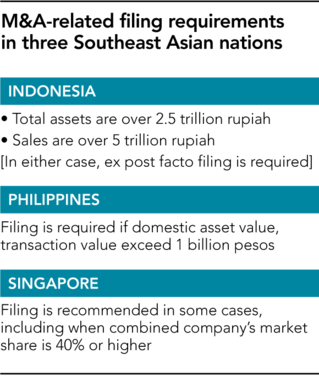 Five companies, including the local subsidiary of British telecommunications giant BT, allegedly joined in the rigging. The Competition Commission has taken the case to the Competition Tribunal.

The tribunal can order companies to pay fines of 10% or less of their annual sales in Hong Kong for violating the competition law, based on the commission's allegations.

The commission received more than 2,000 complaints between December 2015 -- when the competition law took effect -- and this past February.

In January, India announced that for the first time it had reduced a fine for a company which had violated the country's competition law but voluntarily declared its misconduct to authorities.

Pyramid Electronics voluntarily declared its violation of the competition law to authorities during an investigation and had its fine slashed by 75%.

In Indonesia, subsidiaries of Japan's Honda Motor and Yamaha Motor in February were ordered to pay fines for forming a motorcycle price-fixing cartel; they have appealed.

In 2015, six companies, including the Indonesian subsidiaries of Japan's Bridgestone and Sumitomo Rubber Industries, were also hit with fines for forming a tire cartel.

The Philippines put a competition law into force in August 2015, then established enforcement rules last June, leading to full-scale screenings of merger and acquisition activity.

In Thailand, parliament in March approved a bill to revise the country's competition law.

Asia appears to be stepping up a clampdown on unfair business practices, with governments believing that aggressive law enforcement will contribute to economic development.

The 10-member Association of Southeast Asian Nations inaugurated the ASEAN Economic Community at the end of 2015. In the run-up to the AEC, the member nations introduced competition laws in an effort to integrate their economies under common rules.

"The amount of a fine is becoming non-negligible," said Tsuyoshi Ikeda, a Japanese lawyer familiar with the nation's anti-monopoly law. "Close attention should be paid to each country's rules and their enforcement."