China leads the pack as companies show off AI, internet of things and self-driving tech LAS VEGAS, U.S. In terms of ambition and sheer numbers, Asian tech companies were a dominant force at this year's CES in Las Vegas, where artificial intelligence, autonomous vehicles and other cutting-edge technology took center stage.

Founded as the Consumer Electronics Show, a lot has changed about the CES in its more than 50-year history, including its name. The acronym was adopted as the official name this year as a nod to the event's broader focus -- though visitors could be forgiven for thinking it stood for "Chinese Electronics Show." This year, more than 1,300 companies from China set up booths at event -- a third of the total, according to the official website.

"We are the world's third-largest company in cloud computing, only behind Amazon and Microsoft. We are ahead of Google," said a staff member at Alibaba's booth.

"In China, Baidu and Alibaba have prepared for their own AI ecosystem. Baidu introduced its DuerOS AI platform and displayed its home speaker, which will hit the shelves in March," said Lee Jong-wook, an analyst at Samsung Securities who took part in the event.

Google, of course, had no intention of letting itself be overshadowed. The company heavily promoted its voice-controlled personal assistant Google Assistant, and visitors lined up for over an hour at Google's outdoor booth to get a taste of its latest AI technology, which has been used in displays, speakers and other gadgets made by manufacturers such as Lenovo Group and LG Electronics.

Also snagging its share of attention was Samsung Electronics, with crowds flocking to its Galaxy Experience Zone and SmartThings home appliance booth. The South Korean company also offered virtual reality experiences of skiing, sledding and other winter sports -- a nod to its home country hosting its first winter Olympics this February. Samsung revealed its grand plan to use the internet of things to connect all of its devices, from smartphones to refrigerators to automotive electronics. 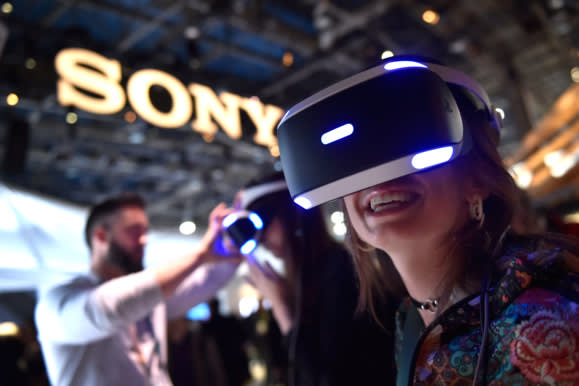 A woman tries out Sony's PlayStation VR headset at the show on Jan. 9.   © Getty Images

Panasonic was one of the standout Japanese companies, drawing attention with its virtual reality technology and AI solutions. The company, like others, is also betting heavily on the rise of electric vehicles for further growth.

"What kind of company Panasonic is ... To be honest, I have been asking the question myself," President and CEO Kazuhiro Tsuga said when asked by U.S. news media to briefly describe his company. "The home appliance business, launched by our founder, still commands a significant presence," he said. "Because of this, it would probably seem like we have lost the plot when I tell people that home appliances are no longer our main line of business," a sign of the transformations taking place at the century-old company.

ROAD TO THE FUTURE Automotive tech was also featured at Sony's exhibit this year, with the company unveiling its first sensor designed specifically for vehicles. Last year, the Sony exhibit focused on organic light-emitting diode TVs and other household electronics.

"Image sensors have more visual capabilities than human eyes," President and CEO Kazuo Hirai said. "We believe that Sony's image sensors will contribute to the evolution of vehicle transportation."

Hirai revealed that Sony has established tie-ups with Toyota Motor and Nissan Motor to commercialize the sensor, building on the partnerships already forged with auto components suppliers Denso of Japan and Robert Bosch of Germany.

Sony is already a world leader in smartphone image sensors. The company's 360-degree sensor can capture footage even in the dark or when there is a glare, a strength Sony intends to bring to autonomous driving technology.

The growing presence of automakers has been another feature of the CES in recent years, and 2018 was no exception.

Toyota President Akio Toyoda unveiled the e-Palette, a box-shaped electric vehicle ranging from 4 meters to 7 meters long that can be used as a shop, a hotel room, or even a mini-restaurant. "The automobile industry is clearly amidst its most dramatic period of change as technologies like electrification, connected and automated driving are making significant progress," he said.

The Concept-i, Toyota's autonomous concept car, also went over well thanks to its futuristic design and striking appearance. The automaker has been taking a leading role in autonomous driving and hydrogen fuel cell technologies.

In another example of the trend toward high-tech vehicles, South Korea's Hyundai Motor is teaming up with Silicon Valley tech company Aurora to bring self-driving vehicles to market by 2021. In addition to developing hardware and software for automated and autonomous driving, the partners will also work on the back-end services required for Level 4 self-driving cars, which is one step below fully autonomous vehicles.

"Combining our advanced vehicle technology that embeds the latest safety features with Aurora's leading suite of Level 4 autonomous technology will advance this revolution in mobility with Hyundai in a leadership position," Yang Woong-chul, vice chairman of Hyundai, told reporters.