TOKYO -- Asian companies conducted a record 12,001 mergers and acquisitions in 2016, reflecting consolidation in India to tap growing domestic demand and a turn abroad in China.

The number of M&A deals announced in 2016 involving companies in Asia excluding Japan climbed 7% from 2015, according to a survey by Thomson Reuters. The value of such deals fell 6% to $1 trillion. But the region accounted for 27% of deal value globally, comparable to the 2015 figure.

Corporate India was particularly acquisitive. Home lender Housing Development Finance Corp., or HDFC, said in August that it will pay $3.1 billion for compatriot Max Financial Services' life insurance operations, intending to merge the business with its own insurance unit to create one of India's largest life insurers. While the South Asian country's life insurance market is just one-tenth the size of Japan's at present, it is expected to grow as India's middle class expands.

The value of Indian companies' M&A within Asia rose almost threefold to a record $28 billion. The 10 largest such purchases were of Indian companies or operations -- a sign that business groups are increasingly focused on the rapidly growing demand within the country.

In Southeast Asia, corporate deals with partners outside Asia slipped 20% amid regional currencies' depreciation against the dollar. But deals with Asian partners surged 90%. Developments such as the launch of the ASEAN Economic Community, a trade bloc comprising members of the Association of Southeast Asian Nations, at the end of 2015 are apparently encouraging companies to bulk up in the region.

Corporations in China and South Korea, where economic growth is slowing, snapped up large European and American companies in 2016 in the hunt for advanced technology and access to new markets. China National Chemical, also known as ChemChina, said in February it would acquire Syngenta of Switzerland, the world's largest agrochemical maker, for more than $43 billion. Chinese airline operator HNA Group said in October it would buy the aircraft-leasing business of CIT Group of the U.S. for $10 billion.

In all, the value of Chinese companies' deals with non-Asian partners rose by a factor of 3.7 to $199.6 billion in 2016. According to a Mizuho Bank official familiar with the Chinese market, companies anticipating further weakening in the yuan could be rushing to pick up overseas assets while they are still able. The Chinese currency hit its weakest against the dollar in around eight years in November, and continued depreciation would sap Chinese firms' buying power abroad.

Chinese companies' M&A activity in Asia, including at home, slumped compared to 2015. But there are signs of a potential recovery in 2017, given that a number of industries such as coal, glass and cement are still grappling with excessive production capacity. Meanwhile, China's Baosteel Group and Wuhan Iron and Steel Group, which merged their management in December to form China Baowu Steel Group, have yet to release plans for consolidating facilities.

Asia's companies now face the test of improving earnings at their new acquisitions and proving worthy of their growing M&A market presence. Only around half of the companies bought by Chinese firms move into the black, the Mizuho Bank official said. 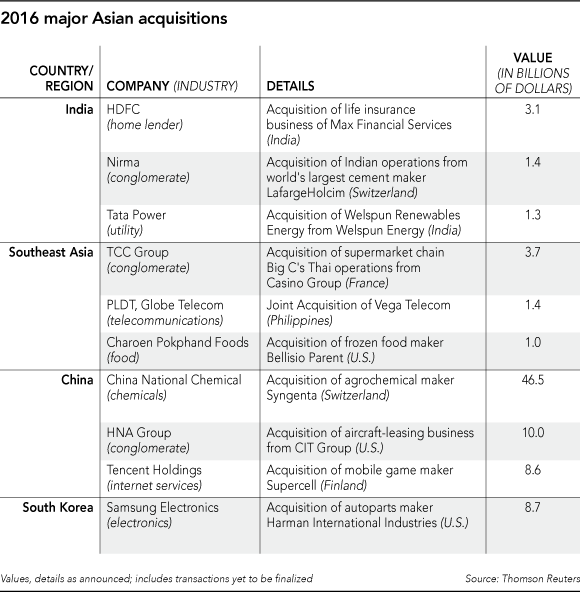