JAKARTA -- Halal is an Arabic term meaning "permissible" or "lawful." To obtain halal certification, food manufacturers must comply with Islamic dietary laws as prescribed in the Quran, the Islamic holy book. Among other things, these laws prohibit the use of ingredients made from pork and alcohol, and set down guidelines for preparation and storage.

Numerous halal certification organizations have sprung up around the world, such as the Department of Islamic Development Malaysia, a government institution better known by its local acronym, JAKIM. Different bodies adopt their own standards for determining the halal status of products or services, and each has its own logos to be printed on packaging and other materials.

The company's advertisements, which aim to project a modern yet timeless style, feature images of Muslim models wearing hijab headscarves and bright smiles. The salespeople at Wardah cosmetic counters all wear blue-green hijab, the color of the brand. "All women want to look just like these beautiful models," one salesperson said.

Wardah currently sells 300 cosmetic products at about 22,000 locations in Indonesia and Malaysia. In the years following its establishment in 1995, Wardah remained a small local brand. Its popularity skyrocketed after it became the official sponsor of the 2013 Indonesian box-office hit "99 Cahaya di Langit Eropa" ("99 Lights in the European Sky"), in which the hijab-wearing lead actress used the company's products.

Since then, the company has kept the momentum up, launching TV ad campaigns and sponsoring fashion events showcasing young designers' Muslim-friendly clothing collections. From a virtual unknown a decade ago, the company now enjoys nearly 50% growth in annual revenue and controls a 5% share of the domestic market.

The company's performance, while impressive, is not altogether surprising, given how rapidly the global halal market is growing. According to a recent report by Deloitte Tohmatsu Consulting, it is estimated to have surpassed $1 trillion in 2015, with food products accounting for 61% of the world's halal trade, pharmaceuticals comprising 26% and cosmetics 11%.

In countries with predominantly Muslim populations, even nonfood halal markets, such as daily necessities and cosmetics, are already thriving. Malaysia's JAKIM said 70% of the applications it receives for halal certification are from the nonfood sector. Less strict halal standards have so far been applied to basic necessities than to food. Nevertheless, many consumers prefer halal-compliant daily goods, not only to ensure they do not run afoul of Sharia, but also because they consider certified goods to be a safer, healthier choice.

International consumer brands have recognized this trend and are keen to tap the vast and promising halal market with halal-friendly products. Alcohol-free products such as a body wash available from Johnson & Johnson of the U.S. and toothpaste from Anglo-Dutch giant Unilever have already proven popular with consumers.

While established players have quickly customized their existing products for the halal market, newcomers are developing innovative items aimed specifically at complying with Islamic rules and practices.

Zahara, a Singapore-based beauty startup, released a line of nail polish products for Muslim women. In Islam, prayers are to be said five times a day and, before each prayer time, Muslims must wash their faces, hands and feet with clean water. For women, this includes removing nail polish. Because conventional polish is difficult to remove, it is hard for Muslim women to enjoy painting their nails while also observing proper prayer practices. To solve this problem, Amira Geneid, herself a Muslim, came up with the idea of a water-soluble nail polish that can be easily washed off before prayer. "I myself wanted to have the luxury of wearing nail polish any time of the day or night," she said.

Geneid's familiarity with Muslim practices provided important clues to starting the business, while her tech-savvy side has helped her market to fellow millennials using social networking sites like Facebook and Instagram. She graduated from the National University of Singapore in 2014 and launched her business the following year.

As the halal market gains global prominence, companies have also been ramping up related products and services, such as logistical services and chemical compounds for use in food, cosmetics and other consumer items.

Nippon Express, one of Japan's largest logistics operators, has obtained halal certification in Malaysia for its services. This certifies that the company is capable of handling, storing and transporting halal products between Japan and Malaysia, according to Nippon Express. In order to export products from Japan to Malaysia, the company must ensure that its entire logistics chain, including warehousing facilities and delivery trucks, is in accordance with Sharia. Nippon Express is playing catch-up in terms of improving the halal credentials of its international operations, which should give a boost to its overseas expansion plans. The certification will set the stage for Nippon Express to fill in the missing link in its halal supply chain, according to a company official. 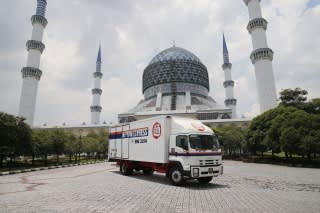 "We receive a lot of business related to exports from Japan to Malaysia," said Nippon Express sales executive Aliff Omar. "The main reason is because the Olympics are coming soon, but there is also a desire to attract Muslims to Japan."

Global chemical companies are stepping up their production of halal-certified chemicals. In 2010, German chemical giant BASF started producing halal materials at its Malaysian factory for use in a variety of applications, including cosmetics and paints.

Halal certification is being expanded to other categories as well. In 2014, Ogawa, a major Japanese flavor and fragrance manufacturer, built a halal-compliant factory in Indonesia. While food flavorings used to account for 90% of the facility's total output, demand for fragrances for nonfood products, such as perfumes, has been growing dramatically.

Companies in the service sector are also responding to the growing demand for halal-friendly services. They include airlines that offer halal-certified menu options and travel agencies that cater to travelers' desire for halal-friendly tourism.

Islamic finance, which refers to financial activities conducted in accordance with Sharia, is also expanding rapidly.

The main driver behind the surging halal market is the rapid growth in the global Muslim population. Muslims are expected to make up roughly 30% of the global population by 2050, which means built-in growth for the halal market. And as Muslim-majority emerging countries in Asia and Africa grow wealthier, the market will become even more lucrative.

But halal products and services are attracting great attention not only because of their compliance with Sharia. Halal certification is also seen as a mark of safer, healthier, higher-quality products.

Din Syamsuddin, former chairman of the Indonesian Ulema Council (MUI), Indonesia's top Muslim organization, told The Nikkei that halal is the "organic option" for the 21st century. This appeal to both Muslim and non-Muslim consumers will help keep the global halal market on a growth path for years, if not decades, to come.