KUALA LUMPUR Clad in her trademark baju kurung, or Malaysian traditional dress, Zeti Akhtar Aziz is unusually animated as she leads visitors around the gleaming campus of the Asia School of Business.

Having retired last year after 16 years as governor of Bank Negara Malaysia, Zeti -- one of Asia's most formidable central bankers -- is indulging a lifelong passion: education. Specifically, she is throwing herself into creating what she defines as a unique model for the "disruptive business age," particularly in Asia.

In Zeti's view, Asian MBA culture is making up for its slow start by leapfrogging the West, in areas ranging from business innovation to hybrid models that take established wisdom and apply it in the regional context.

Like a proud parent showing off a child's talents, Zeti beams as she enters the school's FabLab, a brightly lit workshop full of 3-D printers and other computer-aided design equipment at the heart of ASB's Innovation and Entrepreneurship Center.

Inspiration to innovate is one thing, but possessing the know-how to put ideas into action is another, she believes. "We teach skills here that help entrepreneurship, and 3-D printing is part of that. ... This is about the future. Innovations such as this replicate MIT Sloan's facilities, and we're very proud of it," she said, gesturing to a pile of cables and machines.

As a key force behind the push to create a world-class business school in the Malaysian capital, Zeti is particularly excited about the school's "action learning" program, developed by the Massachusetts Institute of Technology's Sloan School of Management in the 1980s. Under the program, students are given weeks of intensive training and sent to companies to work on specific business problems and strategies.

In the 20-month full-time MBA course at ASB, students spend about a third of their time on these corporate missions, gaining firsthand experience of working on "real" business issues in Malaysia and abroad. They work in small teams as in-house "consultants" at a range of host companies, acquiring in the process familiarity with the nuances of navigating emerging economies.

Zeti described the program as both unique and revolutionary in the MBA world, and one of the most effective ways for students to gain enough experience to become "market ready" by the time they graduate. "It's not an internship or attachment, you actually work on real problems, in real companies," she told the Nikkei Asian Review.

As evidence of its success, the model is now being copied by other business schools, she noted. Even so, few would have the pulling power of Sloan to draw top corporate partners.

"Already, companies that meet our students are often amazed, using words like 'mind-blowing' when describing them. That is great encouragement for us, that we are moving in the right direction. ... Companies tell us that when they accept graduates into their workforce, it takes about two years for them to be able to value add, but we aim to make it as short as possible, so we say 'near value-added' -- that our graduates are able to be near-ready to add value, to whatever industry, from financial services to electronics."

Reflecting the firepower of ASB's board and backers, the school has more than 300 corporate host partners ranging from big regional companies such as Malaysia's Air Asia, Astro Malaysia Holdings, Axiata Group, Sime Darby and CIMB Group Holdings to multinationals such as Boeing, Johnson and Johnson, Intel and Prudential.

Charles Fine, ASB's president and dean, says that the action learning concept "connects theory, case studies and practice." Indeed, many of ASB's first batch of 47 MBA students note they were attracted by the program, as well as by the school's affiliation with Sloan. Jia Wann Tong, an MBA student at the Asia School of Business (Photo courtesy of ASB)

"Action learning is one of the most exciting and enlightening parts of my journey at ASB," said Jia Wann Tong, 31, who did both graduate and postgraduate degrees in the U.K. and worked nearly six years in the oil and gas industry before undertaking her MBA. "The projects provide real business experience ... and a wide range of hands-on learning opportunities where we can exercise leadership skills and apply classroom learning to management challenges in organizations around Asia."

The "East-West" crossover in ASB's approach is also a drawcard, she added. "ASB is the only business school that provides the fusion of both Asia insights and MIT's genetic blueprint. This is truly a unique combination that serves the economies of today and tomorrow."

The school, which opened to its inaugural group of MBA students in August 2016, was established with the backing of Bank Negara Malaysia, in collaboration with Sloan in a 10-year deal that Zeti helped to broker. She is fond of emphasizing that of all Sloan's international collaborations, this is the longest and among the most comprehensive partnerships.

"[Bank Negara Malaysia] had originally looked for a partner for our leadership development center, set up 10 years ago by the central bank to focus on leadership in finance -- but it has gone beyond financial now to the corporate sector, and it has gone global," Zeti said. "MIT had set up a supply chain management school [in Kuala Lumpur], teaching a nine-month masters course, which it had successfully done in Spain; they were looking for an Asian city to manage it, and they looked at Malaysia. It all started from there."

With a top Western name and the backing of a prominent Asian central bank, the partnership has already proved a good match for both sides as well as for the students.

"It is very important also to have the foundations, the analytics, that you can draw on one of the best schools in the world -- this is what MIT offers us and we can draw also on the region, it provides the best you can get from both worlds," Zeti said.

While frequently on the international conference and seminar circuit, where she is in great demand for her economic expertise, she argues that Asia can also teach lessons to the rest of the world. "I'm very proud to say that most of my education, except for my doctorate, was in Malaysia, I graduated from the University of Malaya, and only subsequently went to the U.S. to do my doctorate at the University of Pennsylvania.

"This region has been for 10 years a growth center in the global economy, and I think it will remain on that trajectory for the foreseeable future," Zeti noted. "It's very important to have some education that gives people insight and understanding, on what is going on in Asia, also to have the foundations, the analytics, that you can draw from one of the best schools in the world. This is what Sloan offers us, and through action learning and other programs we can also draw on the region. It provides the best you can get from both worlds."

Under the current agreement, Sloan supports ASB in curriculum development while also providing faculty and staff for the school's flagship MBA course. Over time, the curricula will be expanded, possibly to include specialty fields such as Islamic finance, said Zeti.

STRONG BACKING Any engagement with ASB shows the extent of Malaysian central bank support. The school is located in the bank's sleek Sasana Kijang building near Kuala Lumpur's business district, which hosts the bank's "center for excellence in knowledge and learning" and some international financial education and research facilities, including a global research hub set up by the World Bank Group.

But there are bigger ambitions for ASB. The school is now preparing for its second intake of students even as construction continues apace on its sprawling new campus at the edge of the business district. Architectural plans featuring stylish apartment accommodation, futuristic classrooms, tech labs and recreational facilities suggest that Zeti is only half joking when she describes the new campus as "almost like a resort."

Even the school's temporary housing, however, features state-of-the-art equipment and tastefully designed lecture halls and classrooms.

The idea to build the best educational institution in the field of business and finance has been on Zeti's mind for years, and ASB is a dream come true.

Drawing on Sloan's teaching resources, the school offers an array of visiting professors and outside experts from business, governments and international organizations. Its resident faculty numbers about nine professors, mainly from Sloan for its first year of operations.

Unlike most other schools, the fees for a full 20-month course of about $85,000 for students from outside Malaysia cover accommodation for the entire duration of the program, and for all students, materials, travel and accommodation for an initial six-week training and industry tour to the U.S. The package includes four weeks at Sloan in Boston, as well as about five "action learning" stints with corporate partners, both in Malaysia and abroad.

MAKE-OR-BREAK FACTOR ASB is drawing top talent among MBA candidates from a range of countries and fields, and while setting high entry standards, has given itself enough flexibility to admit some "unconventional students" who might lack formal qualifications but display what Zeti describes as "extraordinary" abilities. They have already shown themselves to be as impressive -- or more so -- than counterparts with formal credentials, she added.

Recruitment is vital for any business school, but for an institution in its infancy, the performance of graduates will be critical. "We will be judged on their performance," Zeti said.

For now, the school's lack of any international ranking is a mixed blessing, she added. ASB remains absent from leading global rankings, and will probably stay that way for at least five years, in a region where rank and status are prime considerations, but this also gives the school time to build up.

Zeti, unsurprisingly, is confident: "We are very ambitious. We know of course we are going to have to earn the recognition, we are going to be assessed when students graduate. They will look at them, and people will say, 'I want to recruit that kind of graduate.'" 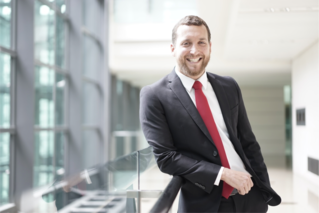 Sebastian Lanfranco says there is an "adventurous spirit" among his fellow ASB students. (Photo courtesy of ASB)

For some students, that is part of ASB's attraction. "I actually like how, since the school doesn't have the legacy of more established programs with lots of history, the student body it has attracted in the initial cohorts is made up of intelligent people from all over the world with a really adventurous spirit," said Sebastian Lanfranco, 31, a Peruvian-Australian who worked for six years as an engineer in project development before signing up for ASB. "It makes for a very collaborative environment and brings unique perspectives to every problem we tackle in class or on action learning projects."

Such attitudes are vital for ASB's recruitment process. And the school's first intake reflects its flexibility, with students coming from 12 countries and six continents, including about one-third Asian, nearly one-third American and the remainder from as far afield as Latin America, Russia and Africa. "We even have two from the Bank of Mexico," said Zeti, noting that other central banks around the world have indicated interest in sending students to ASB.