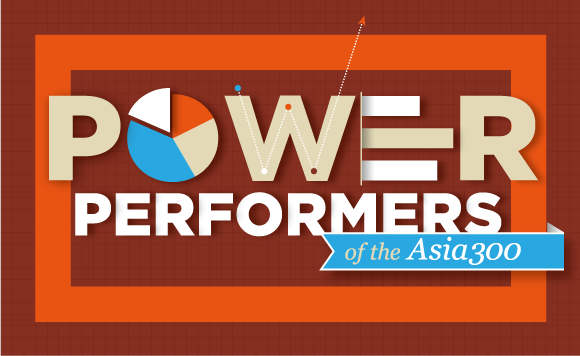 TAIPEI -- Fiscal 2015 saw total net profit among companies on our Asia300 list of the region's best and brightest contract for the first time since the global financial crisis of 2008, and analysts are telling us to brace for more of the same this year. The main culprits are China's slowdown and tumbling prices of natural resources.

But some players continue to shine despite the dark clouds. When we took a magnifying glass to the last five years of financial data for the 331 companies on the list, we found something interesting: The top performers not only continue to rack up stronger sales and profits, but they also boast superior efficiency and stability.

Follow us as we take a closer look at the best of the best, which we've ranked based on their growth, profitability, efficiency and stability.

StarHub, a leading Singaporean telecommunications company, topped our list largely because of its net profit growth, which averaged more than 7% for the five years through fiscal 2015. Also impressive is the efficient way in which the company converts shareholder capital into profit, as proven by its sky-high ROE of 221%.

StarHub has managed to squeeze big profits from a small market by minimizing its assets -- possible thanks to its use of government-bankrolled fiber-optic networks -- and bundling its mobile phone and pay-TV services in attractive packages.

Unilever Indonesia came in at No. 6, largely on the strength of its high ROE, which stood at 122% in fiscal 2015. A unit of the major European consumer goods company, Unilever Indonesia dominates the domestic market for a variety of products, including shampoo. Population growth and expanding disposable incomes are driving its success.

Hindustan Unilever of India placed 14th, backed by an ROE of 102%. The units' numbers stand out against their European parent's ROE of 33%. A boy stacks bars of soap made by Hindustan Unilever, in a store in Mumbai. (Photo by Keiichiro Asahara)

Sixteenth-ranked Advanced Info Service, Thailand's largest mobile carrier, logged an ROE of 82%. The company chalked up profit on the back of 38.9 million subscribers while holding its equity capital ratio down to 26.6%. Its ratio of net profit to sales was high, at 25%.

Dimming its outlook, however, is intensifying competition in the country's rapidly expanding market for smartphone services. The company has to pay a total 116 billion baht ($3.29 billion) for the fourth-generation radio spectrum it won in auctions that ended in May. The spending binge sent AIS's net profit down 18% on the year in the January-March period of 2016. Its stock price has also suffered, falling 30% over the past year.

Asia300 companies also enjoy higher-than-average financial stability because they are not overly leveraged. Their average equity capital ratio, for example, came to 16.5%, higher than the 15.7% and 12.4%, respectively, for components of the Nikkei average and Stoxx 600.

Vietnam Dairy Products (Vinamilk), 20th in the ranking, stands out for its equity capital ratio of 75%, on top of a high ROE of 35%. Surging domestic consumption of dairy goods is propelling the company's growth.

In the five years through fiscal 2015, combined sales of the Asia300 companies surged more than 45%. Sales of companies comprising the Nikkei average and Stoxx 600 rose 24% and 13%, respectively, during the same period.

Seventh-ranked SK Holdings of South Korea, the holding company of SK group, benefited from soaring sales in 2015 on the back of its merger with SK C&C, a leading group information technology company. Online sales of used cars by SK Encar, which was offering nearly 100,000 vehicles as of June 9, also fueled its strong performance.

One of the fastest-growing companies on the list is the 12th-ranked Greenland Holdings, a major Chinese condominium developer and general contractor. Its net profit for 2015 jumped 33 times from five years earlier. It began expanding fast in the mid-2000s and has leapfrogged such rivals as China Vanke and Poly Real Estate Group.

Greenland Holdings, which went public in 2014 through a "backdoor" listing in Shanghai, generates huge sales, at over 200 billion yuan ($30.4 billion). Its strong growth owes a lot to close ties with the government, and much of its focus is on inexpensive housing and prominent high-rises ordered by local governments.

But with its growth has also come greater risk of its assets going sour. Greenland Holdings booked inventories worth 417.1 billion yuan -- equivalent to two years of revenue -- as current assets on its balance sheet at the end of March.

Hong Kong property developer Henderson Land Development, which came in at No. 3, has built up a significant amount of capital, and land it purchased at low cost in the past for development has yielded healthy profits. Similar traits can be seen among fellow Hong Kong developers Sun Hung Kai Properties, New World Development, Cheung Kong Property Holdings and Hang Lung Properties.

Some companies placed high in the ranking because of their extremely large profit margins.

Global Logistic Properties, a Singaporean operator of logistics facilities, made the top 10 thanks to its unusually high net profit margin of 83% for fiscal 2015. Most of that owes to high revaluation gains from its properties in China. 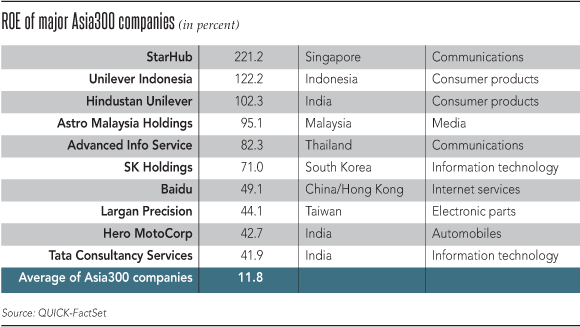 The company has been acquiring and developing warehouses at an astonishing clip. As of December 2015, the total area of its completed properties worldwide stood at 36.9 million sq. meters, for an annual average growth rate of about 56% since 2004. Last November, it acquired 287 warehouses in the U.S. for $4.55 billion, becoming the second-largest warehouse provider in the country. That expansion has translated to average revenue growth of 11% over the past five years.

Coming in at No. 5 is Kweichow Moutai, which makes baijiu traditional Chinese liquor. The company has maintained a net profit-to-sales ratio of about 50% over the past five years, far higher than the 19% for Anheuser-Busch InBev, the world's biggest brewer, and the 22% for Diageo of the U.K., the world's No. 1 producer of distilled alcoholic beverages. Despite China's slowdown, Kweichow Moutai enjoys stable earnings thanks to the brand's prestige at home.

Placing second in our ranking is Baidu, which has captured some 70% of the Chinese search-engine market. Because China has banned Google of the U.S. and other foreign companies from entering the local search-engine business, Baidu effectively monopolizes the online advertising market. Baidu matches U.S. social networking powerhouse Facebook in terms of profitability, with both companies increasing their net profit roughly tenfold over the past five years. Baidu trailed Facebook in equity capital ratio in fiscal 2015, but its net profit ratio of 50% far exceeded the 20% or so of the U.S. company, largely due to the absence of competition.

Airports of Thailand, ranked eighth, is also benefiting from a monopolistic position. Owned 70% by the Thai Ministry of Finance, it operates two airports in Bangkok and four other major domestic airports, including ones in the popular tourist destinations of Phuket and Chiang Mai. Its earnings come primarily from passenger service charges and aircraft service charges, as well as concession revenues paid by duty-free shops and other retailers. It has achieved blistering growth over the past five years, with profits soaring by an average of 56% a year.

In Taiwan, meanwhile, companies have built highly profitable businesses in the IT industry, where global competition is intense. Largan Precision, ranked fourth, commands some 30% of the world market for advanced optical lenses for smartphone cameras. Sales to Apple, its main customer, have spurred its rapid expansion. Specializing in high-performance lenses has helped Largan avoid cost-cutting competition, enabling it to maintain its average net profit ratio at the 40% level over the past five years and bring its ROE to the 40% level as well in fiscal 2015.

Catcher Technology of Taiwan is a leading niche maker of metal housings for electronic devices. Backed by advanced processing technology, Catcher produces housings for smartphones and other devices. It earned the No. 10 spot in the ranking not only because of its excellent growth performance but also from strong scores in the areas of net profit ratio, ROE and equity capital ratio. 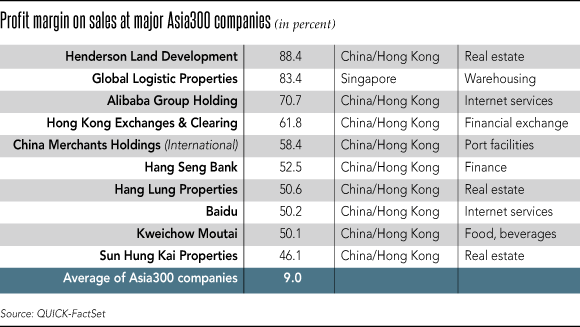 Like Largan, Catcher's earnings have expanded in tandem with global sales of the iPhone. But with Apple trimming production, Catcher needs to craft a new growth strategy in 2016.

Another top performer from Taiwan is Taiwan Semiconductor Manufacturing Co. Ranked 13th, TSMC is the world's largest contract manufacturer of semiconductors, with a global market share of 55%. It also produces system chips for smartphones on behalf of other companies. High quality and advanced technology are its hallmarks.

Chairman Morris Chang recently said the company is ready to do battle with South Korea's Samsung Electronics over next-generation 7-nanometer chips, which are expected to be in high demand among data centers amid the rise of the internet of things and other technologies requiring advanced computing hardware.

Placing 28th is Indonesian property developer Bumi Serpong Damai, whose growth is being driven by its flagship project BSD City, on the outskirts of Jakarta. The township spans nearly 6,000 hectares and includes residential, office and retail spaces. Last year, the development contributed 70%, or 4.7 trillion rupiah ($353 million), to the company's total "marketing sales" -- the value of sales contracts signed during the financial year.

BSD said it will continue developing the project, and aims to transform the entire area into a "digital smart city." Also in the township, the company is developing an office zone dubbed the "Silicon Valley of Indonesia" to attract tech companies and local startups.

Central Pattana of Thailand, ranked 29th, is the core company of retail giant Central Group. It operates 29 shopping malls in Thailand and has maintained average profit growth of 47.6% over the past five years.

Over 80% of its revenue comes from managing malls, but it also runs offices and hotels. Already boasting more than 10 malls in Bangkok alone, Central Pattana is expanding its chain to suburban locations and areas near borders with neighboring countries.

Stock exchanges in the financial centers of Hong Kong and Singapore also made the ranking. Singapore Exchange, in 17th place, benefits from being the city-state's only stock exchange operator, which helped it score a fat profit margin of 44.4% for the year ended in June 2015. Also helping is Singapore's role as Southeast Asia's premier financial hub; 40% of the companies listed on the bourse are based in other countries.

SGX, which lags far behind its Hong Kong peer in stock listings, aims to diversify into a "multi-asset exchange" offering a wealth of products for trade. Its main focus, derivatives, accounted for 40% of total revenue in the January-March quarter.

However, both exchanges are feeling the negative effects of sluggish domestic and regional economies. For the quarter ended in March, the Hong Kong bourse saw net profit slip 9% on the year to HK$1.42 billion, while average daily stock turnover fell more than one-fifth to HK$50.7 billion. But IPO activity remained brisk, with total funds raised up 49.3% on the year.

SGX barely managed to eke out 1% profit growth for the January-March quarter. To diversify its client base, the exchange recently entered talks to acquire the London-based Baltic Exchange, publisher of the Baltic Dry Index, a benchmark indicator of commodities shipping rates.