HONG KONG Corporate governance in Asia has long been problematic and may be facing a crisis. As the shareholdings of big, often family-owned companies are gradually dispersed, many are just beginning to grapple with reform. At the end of June, Lotte was the subject of a cover story for a leading South Korean weekly magazine. The headline read: "Founding family brings about its own destruction." Prosecutors are investigating relatives of Shin Kyuk-ho, founder of the Lotte group, South Korea's fifth-largest conglomerate, on suspicion they created a slush fund worth tens of billions of won, or tens of millions of dollars, by manipulating the cost of transactions within the group. Other media are now poking around and Lotte is much in the news.

BAD BLOOD A feud between members of the founding family brought the scandal to light. Kyuk-ho's eldest son, Shin Dong-joo, and his second son, Shin Dong-bin, are locked in an ugly battle to succeed him that has raged for 18 months. Word of the alleged financial irregularities spilled out in the process.

The ownership interests of the family members in Lotte group companies are so complex and intertwined that disentangling them became difficult when the two brothers and their supporters fell out. The civil war inside Lotte has resulted in corporate dysfunction and undermined the value of the brand.

A succession struggle at Samsung group, South Korea's largest conglomerate, also made headlines last year. U.S. hedge fund Elliott Management opposed the merger of Samsung group companies. It launched a proxy fight at a general shareholders meeting, complaining that the merger was aimed at maintaining the founding family's control at the expense of other shareholders.

Lee Kun-hee, chairman of the group and a son of Samsung's founder, transformed Samsung Electronics into a global leader in semiconductors and smartphones, but he is in poor health. Samsung is slowly passing the torch to Lee Jae-yong, Kun-hee's eldest son and vice chairman of Samsung Electronics. Elliott Management lost the proxy fight but raised serious questions about the succession issue at the publicly traded company.

Bank of East Asia, one of two remaining family-owned banks in Hong Kong, is also locked in battle with Elliott. The hedge fund stepped up its offensive on July 18 by starting legal proceedings against the bank. It claims resolutions adopted by BEA's board of directors over the placement of new shares with Japan's Sumitomo Mitsui Banking in March 2015 were passed for "an improper purpose" and "without due regard" to the interests of all shareholders.

BEA Chairman David Li Kwok-po, for his part, is firmly defending the family business, which dates back almost a century. "We will vigorously resist Elliott's attack on the bank and its directors. Their actions are self-serving and calculated to distract the management team," Li said in a statement the same day, adding Elliott's move would only serve its "short-term interests."

The challenges facing Lotte, Samsung and BEA show how once closely held companies are struggling to change. As businesses are handed down from founders to their children and then to their grandchildren, the shareholdings of family-run companies are diluted, creating difficult problems for management.

Nor is the loss of control limited to founding families. As companies tap stock markets to fund their expansion, shareholders become more diverse and multinational. Traditional methods of corporate governance, in which companies maintain enormous discretion as closely held entities, quickly run up against their limits.

TIME FOR A CHANGE Many big companies in Asia were founded in the 20th century. As their shareholders have become more dispersed and the achievements of their founders fade in people's memories, these companies must forge ahead with governance reform. The question is whether they will be able to keep growing without falling into disarray.

There are three key markers of success. The first is whether a company's transfer of power from the older generation to the younger goes smoothly.

In Hong Kong, the rare absence of Li Ka-shing from the annual shareholders meeting in May of his two flagship companies, CK Hutchison Holdings and Cheung Kong Property Holdings, was a big surprise. Although the no-show by the octogenarian entrepreneur was due to nothing more serious than an upset stomach and the loss of his voice, the meeting provided another opportunity for his eldest son and heir apparent, Victor Li Tzar-kuoi, to demonstrate his readiness to take the helm. 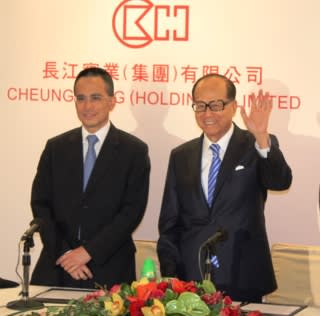 At a news conference in May 2013, Li stated that Victor would succeed him when he retires. His younger son, Richard Li Tzar-kai, who runs his own business, including telecom carrier PCCW, will be compensated with generous financial support.

The second marker is whether a company can make use of outside talent when necessary. Oversea-Chinese Banking Corp., Singapore's oldest bank, offers a good example, according to David Smith, head of corporate governance at Aberdeen Asset Management Asia in Singapore. In 1998, as Asia was in the throes of a financial crisis, then-CEO Lee Seng Wee, the third son of OCBC founder Lee Kong Chian, passed the baton to Alex Au from Hong Kong, the former CEO of Hang Seng Bank.

Lee Seng Wee, as chairman, put Au in charge of implementing a plan to strengthen the bank's management to survive liberalization of the banking industry. In the years since, OCBC has continued to bring in fresh blood, with American David Conner from Citibank and Singaporean Samuel Tsien, who built his career at Bank of America, taking the top spot in succession.

The third marker is the company's social standing. A business that is seen as an enemy of society will not survive. The financial institutions on Wall Street that were ensnared in the 2008 financial crisis have continued to struggle with regulations that were strengthened in response to public outrage over publicly funded bailouts. 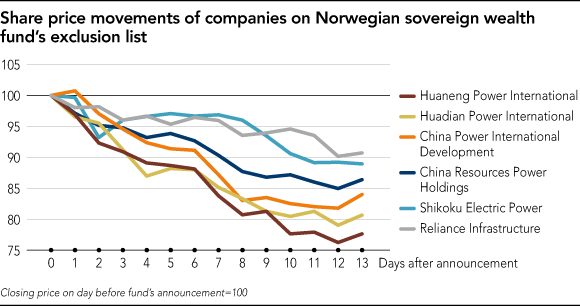 Investors are increasingly sensitive to public opinion. Norway's sovereign wealth fund, Norges Bank Investment Management (NBIM), the largest fund of its kind by assets, has divested itself of companies that rely heavily on coal power. Its announcement on April 14 excluded 52 companies from its previous portfolio. Of these, 22 are Asian, with seven each from China and India.

The move hit the stock prices of the companies concerned. Four mainland Chinese power generators lost more than 10% of their market value in the two weeks immediately following the announcement.

The term "public interest capitalism" is heard often these days. It refers to a system in which companies can keep growing only if they provide benefits not only to their shareholders but to a wider range of stakeholders, including customers, employees and society at large. Following the global financial meltdown, this view of companies' social role has gone mainstream.

In Asia, the widening gap between haves and have-nots is closely tied to criticism of the cozy ties between government and business. Asian companies that owe their development to the strong leadership of their owners -- whether founding families or governments -- must rework their corporate governance if they are to continue to thrive.