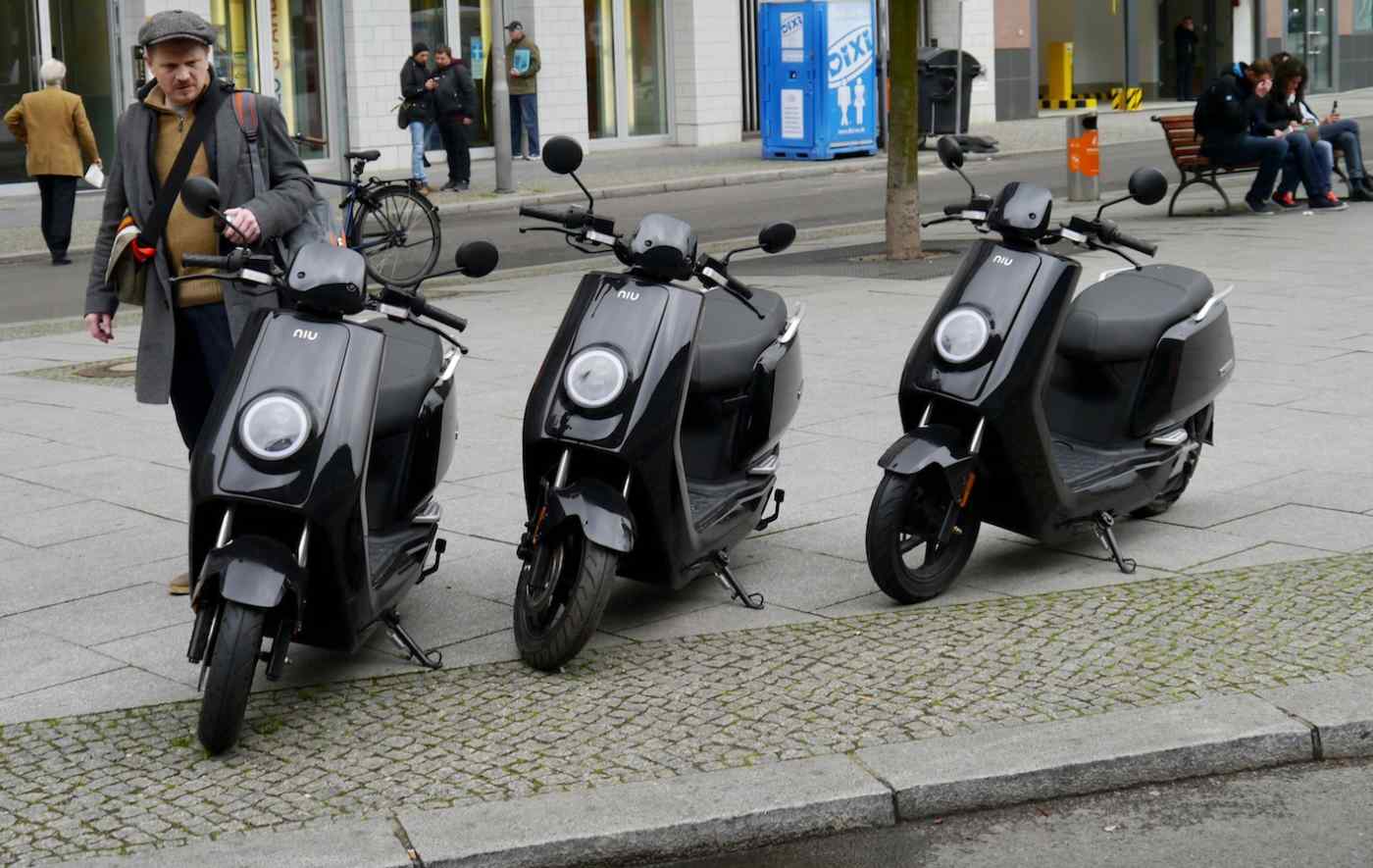 BERLIN -- Germany is a relatively cold place, where motorcycles are mostly seen as summertime toys rather than a serious transport option. So it is all the more surprising that the country has become a market battleground for the latest generation of Asian-branded electric scooters, laden with smartphone-linked technology

These e-scooters represent a huge advance from their gasoline-powered cousins in terms of environmental friendliness. The latest "smart" versions can also connect to a driver's smartphone via an internet app that facilitates easier battery charging, range control, and anti-theft and billing functions, among other features.

Facing off on the roads of Europe's biggest economy are Taiwan's Gogoro and China's Niu, the former distributed through the Coup scooter sharing scheme in Berlin since August 2016, the latter sold nationwide, as well as in Austria, Belgium and Switzerland, since early this year. Coup started with 200 Gogoro scooters and says it is in the process of adding another 800. Niu has not disclosed its German sales figures or number of sales outlets.

Bosch's involvement with both companies is hardly a coincidence. Amid the global drive to reduce carbon emissions, the transition from combustion engines to battery-powered motors represents a major headache for the German auto supply sector. E-motors comprise only a few dozen parts, compared to the 1,000 or so in a combustion engine. Besides Bosch, fellow German auto suppliers Continental and ZF Group have been warning of future layoffs due to the world's looming switch to electric vehicles. 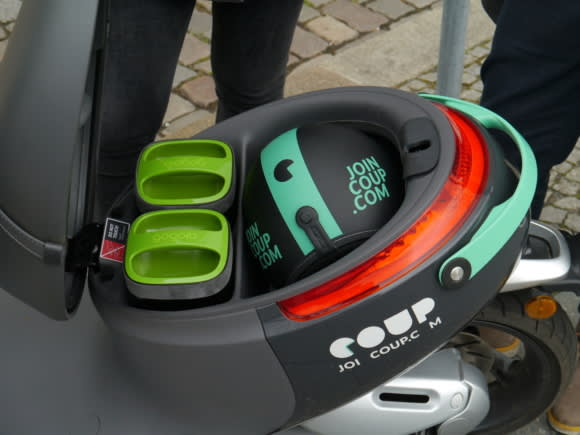 "With Coup, Bosch wants to help shape the transformation of urban mobility and understand users' requirements with regard to these services," Mat Schubert, chief executive of Coup, told the Nikkei Asian Review. A small fleet of Niu scooters is frequently parked outside Coup's headquarters on Berlin's Friedrichstrasse, reflecting Coup's testing of both companies' products.

Gogoro's battery recharge concept impressed Coup. Gogoro has been running its own e-mobility scheme in Taiwanese cities since 2015. But customers there have to buy the scooter for the equivalent of approximately 60,000 New Taiwan dollars ($1,977.9) and then swap batteries at a network of exchange stations, paying monthly subscription fees of between NT$300 and NT$900. The Berlin model offers a full day of riding for 20 euros ($22.59), or 3 euros for 30 minutes, without purchase of the actual scooter.

The Coup smartphone app shows customers where to find an available scooter, unlocks and locks it, and does the billing. During use, the app displays the scooter's location and informs on battery status and remaining range. Total range is about 95km, and the motor is limited to a maximum speed of 45kph, so that riders aged over 21 can use them in Germany with a car driver's license. Unauthorized access is blocked by the system.

"A Coup service team goes around Berlin like a milk truck swapping batteries and checking whether any maintenance is needed," said Jason Gordon, Gogoro's vice president of communications. "Although the Berlin weather compels us to take the scooters off the road from mid-November to early-March, we chose the city over the warmer European metropolises, such as Madrid and Rome, because it is perceived globally as a trend-setting place and because the people of Berlin embrace new things."

Berlin prides itself as the world's "sharing capital," introducing the Mitwohnzentralen, a precursor for Airbnb, in the 1980s and a borrowing shop for electric drills in 2014. The city hosts nearly a dozen car-sharing schemes.

Oliver Kless, a TV editor and Berlin resident, has been an avid car-sharer for three years and recently subscribed to Coup. He is impressed by the Gogoro scooters' powers of acceleration, which "surely puts them ahead of the pack after every red light." However, Kless identified an annoying downside of digital connectivity. "On one of my first rides, my smartphone battery ran out, so that there was no way for me to shut off the motor and the headlights until I begged a nearby cellphone shop for an emergency smartphone recharge," he recalled.

Meanwhile, Niu scooters, which go for approximately 2,700 euros per unit and use an app similar to Coup's, have taken advantage of Gogoro's preoccupation with Berlin to make swift territorial gains elsewhere.

In Fulda, a town in the state of Hesse, Mitsubishi and Suzuki-car dealer Auto & Allrad has since March been selling the Niu e-scooter, the first in its portfolio. "We bought Chinese e-scooters in the past, but unpacking the first Niu was a totally different experience," said Auto & Allrad's general manager Klaus Diegelmann. "These are no longer your old gas scooters that were somehow converted to electric power with a few screws, but a very modern story that totally convinced me, like with an Apple product."

Timm Radermacher, a Niu user in Heidelberg, in the state of Baden-Wuerttemberg, is also enthusiastic. A medical device engineer, Radermacher said the scooter's battery can be taken out within a few seconds and easily carried into a home for a six-hour recharge. This contrasts with e-scooters sold previously in Germany, he said, which featured awkward industrial-style plugs that had to be connected to immobile charging stations.

Coup will shortly launch an operation in Paris with an initial batch of 600 Gogoro scooters, bringing total European sales to 1,600, in addition to 20,000 units that have been sold in Taiwan. Niu did not respond to queries for this article, but it envisions cumulative global sales of 150,000 by 2018. It had sold 100,000 units in China by September 2016.

Are the systems used by of Gogoro and Niu translatable into the realm of cars? The answer appears to be a clear no, as car batteries are too heavy to be readily portable, and will remain so for a long time.

"We don't see the technology for car battery swapping," said Gordon. "Expectations are very different for e-cars than for e-scooters, as a user would expect to drive them not in the city only but from Hamburg to Munich and even further, and the recharge infrastructure to serve this would be prohibitively expensive."

Jason Lee, an analyst at Shanghai-based China Market Research, said that although Germany seems cold for motor scooters, German auto and motorcycle dealers' abundant experience and good reputations may have motivated Gogoro and Niu to choose the country as their first overseas markets.

"The success of sales in Germany can help them expand to other European countries and North America as well, because Germany is a country that thinks highly of product quality," Lee said.