TOKYO -- A pair of Asian fintech startups made big splashes on the stock market this week, demonstrating the extent of investor excitement over the nascent field.

Investors welcomed both companies by sending their prices surging on day one.

Money Forward quickly attracted buy orders when the market opened, and started trading at 3,000 yen in the afternoon -- 94% higher than the offer price of 1,550 yen. The stock closed at 3,085 yen, putting the company's market value at some 56 billion yen ($500 million).

The company's personal finance app helps more than 5 million users track their various transactions. Its cloud-based software, its other key service, is used by over 2,400 accounting firms, according to the company.

The price jump means expectations are high, co-founder and CEO Yosuke Tsuji told reporters in a news conference after Friday's closing. "We will respond to that by offering services."

According to Tsuji, Money Forward's growth strategy includes both expanding the customer bases of existing services and launching new ones. Among the plans is a service that would help small and midsize enterprises handle invoicing and collecting. "We will offer a service so that SMEs that lack personnel can concentrate on their core work," Tsuji said.

"The Japanese market is big [for us]," he said, while adding that Money Forward also wants to expand abroad "in the next few years."

"Some money-related problems," he noted, "are common globally."

The roughly 2.8 billion yen raised in the IPO will go toward advertising, investment in subsidiaries and other needs. 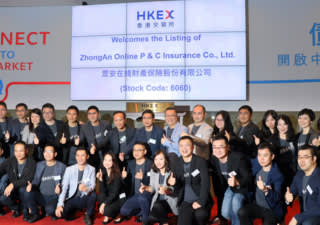 Menmers of ZhongAn Online P & C Insurance pose for the photo session to mark the company's debut on the Hong Kong Stock Exchange in Hong Kong on Sept. 28. (Photo by Shinya Sawai)

As for ZhongAn, demand for the IPO hit nearly 400 times the number of shares on offer. The price jumped as much as 18% on Thursday, though the stock ended down 2.7% on Friday.

Looking beyond the buzz, the two companies also illustrate the challenges of pioneering a new sector.

ZhongAn is likely to suffer a net loss this year, due to increased personnel costs and research and development expenses.

Money Forward has not turned an annual profit since its foundation in 2012, and it too projects a net loss of 1 billion yen for the current fiscal year through November. Advertising and recruiting costs are considered the key culprits.

At Friday's news conference, Tsuji declined to comment on when the company is likely to enter the black.