Manufacturers from China, South Korea, India and other countries have opened new plants in the nation, while a growing number of European and U.S. brands are sourcing garments there.

One reason for Ethiopia's emergence on the clothing scene is the opening of a railway line to a port in neighboring Djibouti, located on the Horn of Africa on the Gulf of Aden. The railway speeds the transport of goods from the landlocked country's industrial areas, such as the Bole Lemi Industrial Park, an hour's drive from the capital, Addis Ababa. 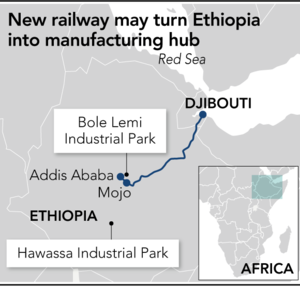 Opened in 2014, the 150-hectare park is bustling with Chinese, Taiwanese and South Korean production lines, conveniently clustering factories for textiles, apparel and leather shoes in one area.

At a factory operated by Shin Textile Solutions, a South Korean company, workers sit at long rows of machines sewing mainly sportswear. According to the general manager, the plant's entire output is exported, with about 60% going to Europe, 20% to the U.S. and the remainder to Asia.

Japan's Fast Retailing, which makes and sells casual clothes under the Uniqlo brand, is among the many apparel makers that have shown interest in the plant, the manager said.

DRIVE TO INDUSTRIALIZE Ethiopia's main exports include coffee, gold and leather products, but the government is trying to develop new industries. Arkebe Oqubay, special adviser to Prime Minister Hailemariam Desalegn, has pledged to transform Ethiopia from an agricultural economy into an industrial powerhouse.

As part of its drive to lift the country to middle-income status by 2025, the government has been building industrial parks. The newest is Hawassa Industrial Park, a one-hour flight from the capital. Among the 15 companies with factories there is PVH, a U.S. apparel company.

PVH's 280 employees produce garments for a number of international brands, including Calvin Klein, fpr export to Europe and the U.S.

With a population of around 100 million, Ethiopia is the second most populous nation in Africa after Nigeria. The country's young, cheap workers give it the potential to grow into a major garment hub.

Another factor in the country's favor is its fast-developing infrastructure. Ethiopia used to depend heavily on trucking, hindering its transition to a more export-oriented economy. But the railway connecting Addis Ababa to Djibouti will help solve this problem.

The government has built a distribution center in the Addis Ababa suburb of Mojo, which also has a train station on the new line. Goods from Ethiopia's industrial parks will be sent to the Port of Djibouti via the center.

At present, most of the companies investing in Ethiopia are apparel makers and other light-industry manufacturers. But General Electric plans to make medical equipment in the country, and Samsung Electronics is working with a local partner to produce printers.

Meanwhile, Hyundai Motor reached an agreement with a local company in May to build a commercial vehicle assembly plant.

China has also been a leading investor in Ethiopia, as in other parts of Africa. The Ethiopian prime minister attended the international conference in May on China's Belt and Road Initiative in Beijing.

The inclusion of Ethiopia at the conference shows the importance China places on the country as a regional transportation and production center.