At post-scandal Mitsubishi, reforms aplenty but no hit cars

Automaker is more nimble and open under Nissan, but struggling to find its voice TOKYO -- To snuff out the corporate culture that led to  ' damaging fuel economy scandal, the Japanese carmaker has made openness and independent thinking a priority among its employees, Executive Vice President Mitsuhiko Yamashita said.

"We've noticed that workers are beginning to recognize and address problems together," Yamashita, who oversees development and quality at Mitsubishi, said at a briefing Thursday on the company's reform efforts.

The overhaul is being spearheaded by Nissan Motor, which purchased a controlling stake in Mitsubishi after it came to light last April that Mitsubishi had cheated on fuel-economy tests for several models.

Although Mitsubishi is making progress in transforming its old ways of thinking under the leadership of renowned change-maker Carlos Ghosn, Nissan's chairman, the company has been slower to return to what it does best: turn out cars that stand out from the crowd.

Scandals are nothing new for Mitsubishi. Besides the latest troubles, past dramas have included covering up defects to avoid recalls. Employees have taken to referring to the ongoing overhaul as "our fourth reform."

Nissan dispatched Yamashita to Mitsubishi in June 2016 to fix things. He was chosen because of his key role in helping lead Ghosn's reform initiative at Nissan.

Speaking at Thursday's briefing about the changes he has helped oversee at Mitsubishi, Yamashita said the carmaker had adopted technology that automatically calculates fuel economy data, leaving humans out of the equation. Once such infrastructure was in place, he said, the next focus was to introduce reforms targeting the organization and its employees.

That has involved restructuring Mitsubishi into four groups -- including product strategy and procurement -- and placing each under the control of its own chief operating officer, he said. The change has ended the slow decision-making that resulted from having too many divisions and employees under the direct supervision of a single person -- the CEO. 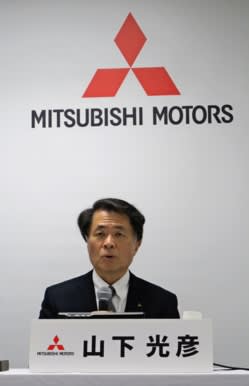 The development group, for example, now has just three layers of management under its chief, compared with five in the past.

Another change has been to scuttle fixed pay and seniority-based promotions in favor of a merit-based system.

Some of the reforms are less easy to measure, focusing more on employee mindset. Since assuming his current post, for example, Yamashita has made almost weekly visits to Mitsubishi's core SUV plant in Okazaki, Aichi Prefecture, to talk with workers there.

The ongoing reforms are different from past ones because "we have put measures into effect," Yamashita said.

The changes have produced tangible results. In January, Mitsubishi upgraded its operating profit projection for the year through March 31 to 1 billion ($9.16 million) yen, due in part to the adoption of Nissan's system of controlling earnings on a month-to-month basis. Mitsubishi initially forecast an operating loss of 27.6 billion yen because of suspended sales following the data fraud.

On a less-positive note, domestic sales plunged to a record low of 79,800 vehicles in fiscal 2016. To turn the numbers around, the company needs a blockbuster model, like what it had in the Pajero in the 1980s and 1990s. Suppliers and dealers support the idea, but they are starting to doubt whether it will happen.

When Mitsubishi President Osamu Masuko met last Friday with the heads of 12 companies that supply parts to the automaker's Mizushima Plant in Kurashiki, Okayama Prefecture, he heard a chorus of complaints about a slide in orders.

Behind the griping was Nissan's decision to take the lead in selecting suppliers for a new minicar model -- a move that snatched business away from Mitsubishi-affiliated suppliers.

Dealers are clamoring for a new plug-in hybrid, with one Tokyo-based dealer saying such cars "reflect Mitsubishi's strengths."

But with Nissan and Mitsubishi increasingly sharing chassis and other components, Mitsubishi will find it harder to produce vehicles that are uniquely its own.

Today, the company is looking to carve out a niche as a small but singular carmaker, in the mold of Mazda Motor and Subaru. The question is whether it is shrewd enough to accomplish that feat while taking full advantage of Nissan's business savvy.