When families hold sway, their businesses might have an edge over rivals

TOKYO -- Toyota Motor, Wal-Mart Stores, and ArcelorMittal. Many companies that draw stock market attention are management-owned companies. They have strengths and weaknesses, and not all of them are big names.

"We focus more on future growth than on improving our current fiscal situation," said Yuichiro Kutsuna, the 42-year-old second-generation president of Tosho, which runs more than 70 Holiday fitness centers in Japan. He adopted this management philosophy from his father, Toshihiro, 66.

The father founded the company in 1979 and handed the baton to his son in June 2016. The company was listed on the Tokyo Stock Exchange in 2004, but the family still holds nearly 60%, an ownership structure typical of management-owned companies.

What is unique about Tosho is that it has a policy of owning the buildings that house its gyms. Rivals are mostly wary of owning property because the increased debt erodes their short-term finances. They usually opt for long-term leases. Tosho, by contrast, is eager to spend. It borrows about 450 million yen ($3.96 million) every time it builds a new fitness center.

It takes seven years for the company to pay off a 450 million-yen loan. But after that, the benefit of owning rather than leasing starts to be felt (no rent payments). "The advantage of a management-owned company," Yuichiro said, "is that we can run a business over a 10-year-span." 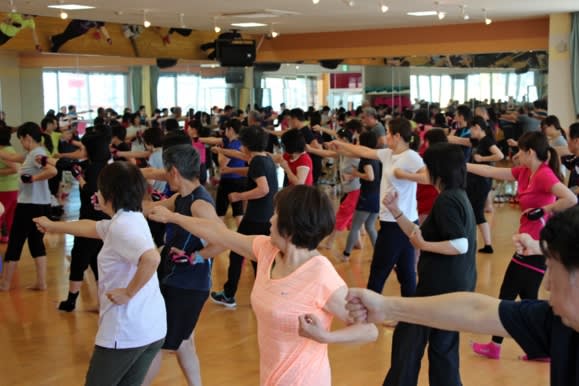 This fitness center, operated by Tosho, is in Aichi Prefecture, central Japan.

One peculiar characteristic of management-owned companies in Japan is the practice of handing over power to a son-in-law.

Shim Jung-wook, an associate professor at Kyoto Sangyo University, and other researchers categorized Japan's management-owned companies into four groups -- those run by founders, founders' relatives, sons-in-law and veteran employees. They found that the ones headed by sons-in-law were the second-best performers, after those run by founders, in terms of ROA and sales growth. 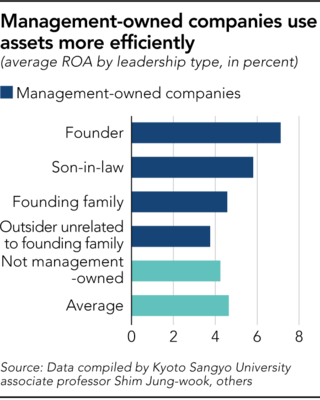 Handing over a company to a son-in-law is almost unheard of in China and South Korea, where blood relationships hold great sway. "Choosing a son-in-law as a successor is an efficient system that places greater importance on family than blood relationship," Shim said. "[Japanese companies] don't hesitate to let competent sons-in-law [take over]."

Perhaps one factor behind the success of sons-in-law is their lack of a blood relationship with the founding family. This increases job insecurity, which can often be used as motivation.

At some Japanese management-owned companies, experienced employees sometimes take the helm to fill the gap until someone from the founding family steps in. Toyota Motor's Hiroshi Okuda and Seven & i Holdings' Toshifumi Suzuki were both charismatic leaders in this category. They pushed through reforms and laid the groundwork for further growth. Toyota Motor President Akio Toyoda acknowledges the importance of having such talent, likening experienced executives to co-drivers.

According to a study last year by the University of St. Gallen in Switzerland, the world's largest management-owned company is Wal-Mart, the biggest supermarket chain in the U.S. Its present chairman, Greg Penner, once headed Japan's Seiyu supermarket chain when it was owned by the U.S. company. He is a son-in-law of Robson Walton, a second-generation leader of Wal-Mart.

There are management-owned automakers, too. Ford Motor, led by the Fords, and Volkswagen, by the Porsches, are examples.

Management-owned companies are good at making decisions, and this is especially apparent when they decide to merge with or acquire rivals. ArcelorMittal was born in 2006 out of a hostile takeover by Mittal Steel, led by Indian tycoon Lakshmi Mittal, of Arcelor. It is now the world's largest steelmaker.

In 2016, Marriott International became the largest hotel chain by purchasing Starwood Hotels and Resorts, which owns the Sheraton, W and other brands, for $13 billion.

In the tech industry, founders often remain on the front-lines. At the so-called FANG companies -- the symbolic, high-value companies of Facebook, Amazon.com, Netflix and Google (a unit of Alphabet) -- founders are still up and running.

Management-owned companies can take advantage of their unique ownership and management structure by issuing different class shares and using various other measures to list while also maintaining the founders' influence.