Austria's Magna helps Sony and carmakers in race for EVs Magna Steyr is increasing its presence as a developer and contract manufacturer of electric vehicles for the world's IT giants. (Photo courtesy of the company)
NAOKI WATANABE and KOSEI FUKAO, Nikkei staff writersMarch 4, 2021 11:40 JST | Europe
CopyCopied

TOKYO/FRANKFURT, Germany -- Magna Steyr of Austria, the world's largest contract manufacturer of automobile bodies, is drawing attention as new entrants in the auto industry from other sectors increase amid a global shift to electric vehicles.

Magna, which counts Sony among its clients, is becoming the Foxconn of the auto industry, company President Frank Klein said in a recent interview with Nikkei. Foxconn, or Hon Hai Precision Industry, is a world-leading electronics contract manufacturer based in Taiwan. The Wall Street Journal and other U.S. media have named Magna as a potential partner for Apple's EV project.

Barriers against entering the auto industry are falling lower because it is easier to develop electric vehicles than gasoline-powered cars, Klein said. If a client brings an idea, Magna is able to help realize it in a one-stop manner covering everything from development to production, he said.

An analysis of current trends shows everything shifting to electric vehicles, Klein said, and Magna is pouring 40-50% of its development efforts into EVs.

Magna has been primarily developing and manufacturing luxury and other models for low-volume production under contracts with automakers. The increasing shift to EVs has raised its presence as an intermediary for outside companies' entry into vehicle production. Magna has so far produced a total of 3.7 million units of 30 models for 10 automakers and others, such as the G Class of Mercedes-Benz, BMW's 5 Series and Z4, the Toyota GR Supra and the Jaguar I-Pace. Recently, it was involved in the development and production of Sony's Vision-S concept car.

Having a history of 120 years, Magna is doing business in Graz, Austria, and many other places around the world and is capable of producing 350,000 to 400,000 vehicles per year. Requests for support in development and production are pouring in from clients all over the world.

"We have plans to extend our plant in Slovenia, and in China. We will continue building these plants and use that existing capacity," Klein said without disclosing how much it will spend for the capacity increases.

Entry into the production of gasoline-powered vehicles is difficult, as they consist of some 30,000 parts each. The auto industry has developed a pyramid-type structure, with automakers having suppliers under them. In other words, the industry has a "vertically integrated" business model in which companies belonging to carmakers' groups engage in the whole process from procurement to production and marketing. Magna Steyr President Frank Klein expects the rise of electric vehicles to change the structure of the auto industry. (Photo courtesy of the company)

"We are already the Foxconn in the automotive industry," Klein told Nikkei. It is difficult for any company to enter the business of producing cars that must be able to hit highway speeds of over 200 kph on behalf of automakers, he added. Although some companies are getting into contract manufacturing of automobiles, Klein said: "I think a lot of them will fail. Building a car is very difficult, and customers expect a premium quality."

Information technology companies are breaking into the auto industry. In the U.S., Amazon has acquired Zoox, an autonomous vehicle startup, for the development of unmanned delivery service, while Google parent Alphabet is developing self-driving technology using its subsidiary Waymo.

Amid these and other developments, the biggest attention is being directed to reports of Apple negotiating with South Korean, Japanese and other companies to prepare for entry into the auto sector.

Klein declined to comment on speculation about Magna talking with Apple. Noting in general terms that many new entrants into the auto sector are getting in touch with Magna, he said they can enjoy the benefit of releasing products very swiftly through tie-ups with outside companies like Magna.

After Magna participated in its development, Sony's Vision-S drew global attention. During the 2021 CES trade show for consumer electronics, held online in January, the concept car was tested on a public road in Austria. Calls for commercial production of the vehicle are growing in the market, though Sony denied any plan for doing so at present. 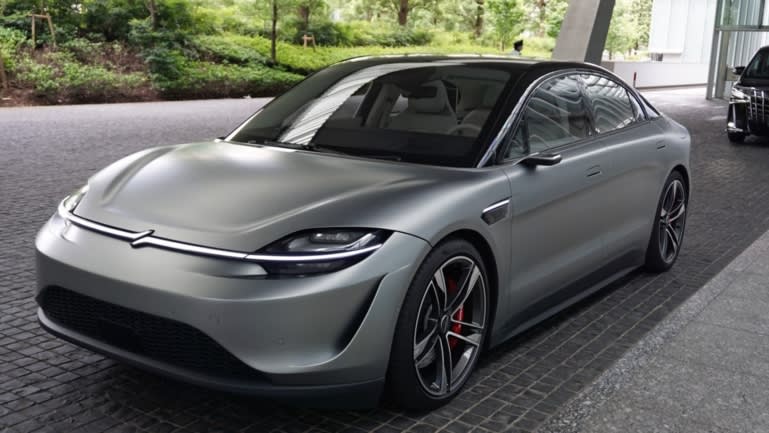 Entry by Apple and other IT companies would vitalize the market for contract production and prompt a horizontal division of labor. Engineering and other companies strong at production of auto bodies -- such as Magna, fellow Austrian company AVL and Britain's Ricardo -- are expected to strengthen their presence as intermediaries for new entrants to the auto sector.

Chinese companies are also reinforcing their market presence. Startups aiming to become "China's Tesla," such as NIO, Li Auto and Xiaopeng Motors, have pulled out of temporary doldrums and are boosting sales. China Evergrande New Energy Vehicle Group is making full use of such contract EV makers to expand its product lineup.

Ricardo declined to comment on "any clients' plans" but said it is receiving a series of requests from them.