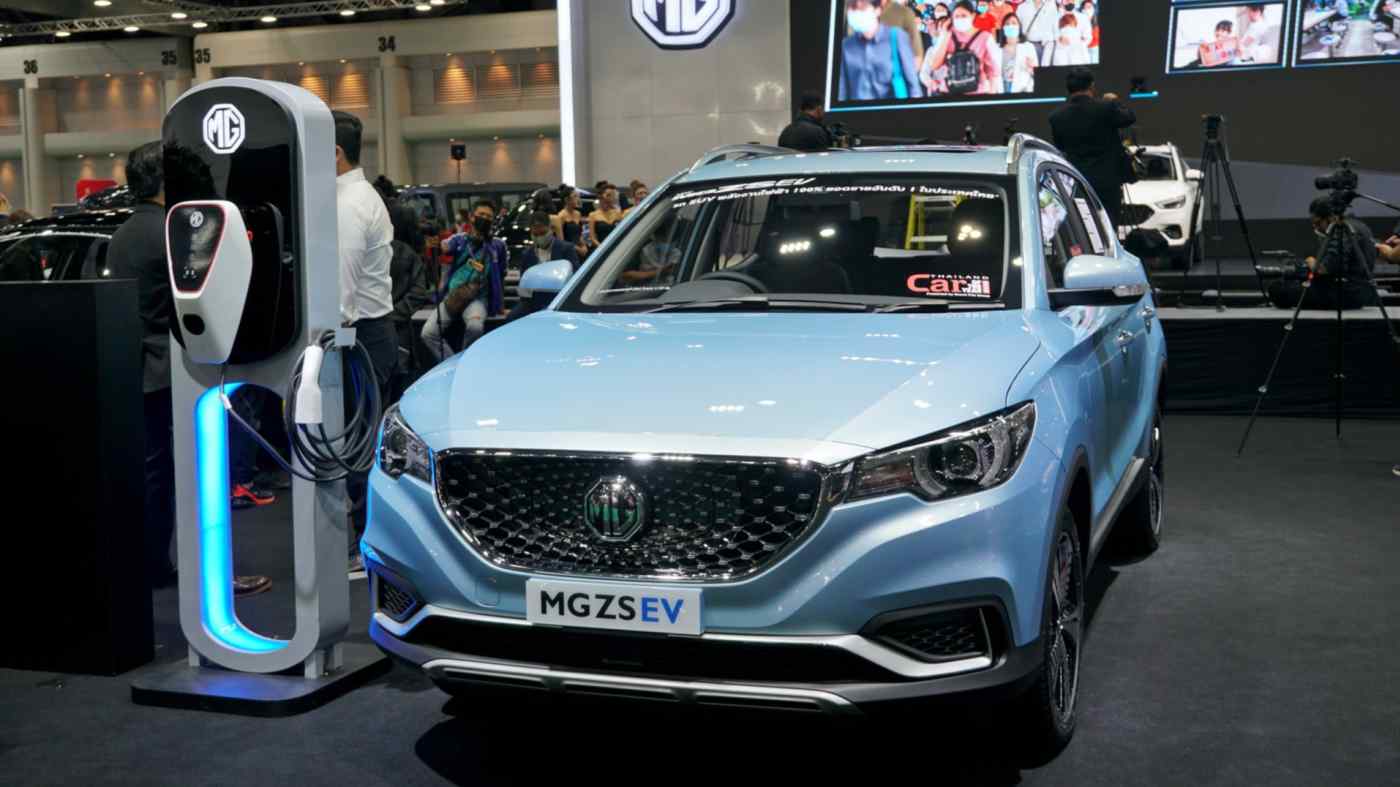 BANGKOK -- Big companies in Thailand are investing heavily to foster the takeup of electric cars in response to government's goal of turning the country into Southeast Asia's EVs hub within the next decade.

The world is going green and Thailand is jumping on the bandwagon. The National Electric Vehicle Policy Committee recently revealed that it is considering a new EV production target that would see EVs account for half of Thailand's auto manufacturing by 2030. The country is expected to be making 1 million EVs a year by then.

The target is a clear signal for automakers, energy producers and other companies to seize the opportunity to invest in EV infrastructure, as the number of people driving electric cars is expected to rise substantially over the next few years.

According to the Thailand Board of Investment, investment in EV manufacturing and related infrastructure in the 2017-2019 period reached 79 billion baht ($2.5 billion). Over the next three years, that spending is forecast to rise at a much faster rate than even the record pace set over the previous three-year period.

One fast-growing field in Thailand is the EV infrastructure business. The Energy Ministry says there are 1,200 EV charging stations nationwide at the moment. The government does not have a specific target for how many EV stations there should be. Most EV stations are being built by private companies eager to cash in on rising demand, and the government does have an official policy to promote EVs.

Nikkei Asia has learned that at least six big companies have jumped into the EV infrastructure and charging business. Energy Absolute, a renewable power generator, already has 400 EV charging stations across Thailand and develops apps to help owners of electric cars find nearby charging points. The company aims to have up to 1,600 stations next year.

PTTOR, the retail arm of Thai oil and gas conglomerate PTT, is also trying to catch the wave. The company has built 30 charging stations in Bangkok and surrounding areas, and hopes to have 300 EV charging stations across the country over the next two years. Other companies, such as gas station operator PTG energy and Bangchak, an energy conglomerate, are with working with government agencies and jumping into the business.

Siam Cement Group (SCG), has launched its "EV Solution Platform," which offers integrated EV supply and after-sales services. The company will deliver an array of products and services, including EV supplier selection and sourcing for the Energy Storage System, a modern battery system for EVs. It is also installing EV charging stations at office buildings and in homes.

As many companies are competing in the EV charging station business, the country's Energy Regulatory Commission has initially set the EV charging price at a relatively low of 2.63 baht ($0.08) per kilowatt-hour to promote the use of EVs. However, some newcomers such as PTTOR are trying to attract consumers by offering free charging for a few months.

Thailand's EV promotion measures could affect global automakers' strategies as well. Thailand set out to become the auto manufacturing hub of ASEAN about 20 years ago, managing to draw investment from big Japanese carmakers, followed by automakers from Europe and the U.S. This created jobs and transferred technologies that helped Thailand's auto industry develop.

Now the kingdom is trying to become "Thailand 4.0," a country whose industries use next-generation technologies such as 5G networks, robots, and EVs. The government's support for EV-related business is part of this effort to transform Thailand by capitalizing on high added value from EVs.

At the same time, the government is creating the Eastern Economic Corridor -- a string of investment zones that aim to foster new industries, particularly in the EV sector. With the strategic location of the EEC and new investment in the EV business, Thailand intends to be the No. 1 manufacturer and a major exporter of EVs in ASEAN.

Toyota was the first carmaker to offer EVs in Thailand, along with plug-in hybrids. In recent years, Chinese carmakers have been more aggressive, with SAIC Motor, launching an electric version of its MG model. The latest move comes from China's Great Wall Motor, which took over GM's auto plant in the eastern coastal province of Rayong in February last year. Great Wall says it is ready to launch EV models, starting this year.

While the number of new entrants in the Thai EV market is growing, the supply chain is a major challenges for the kingdom to reach its ambitious target, said Surapong Phaisitpattanapong, a spokesman for the Federation of Thai Industries' Automotive Industry Club.

He points out that they are trying to turn themselves from makers of parts for internal combustion engines into suppliers of EV components, such as batteries, electric motors, and converters, which could take a long time.

It's all about the economy of scale," Surapong told Nikkei Asia. "If the number of EV users goes up substantially, it would be worth investing, and everyone, including auto parts makers, would be ready to switch to producing EV parts, and that would create supply chains that are ready for the development of EVs, but it will take time."

Neither has government provided enough subsidies to deliver the boost to EV sales it is looking for. There is only an indirect subsidy to EV parts manufacturers and EV assemblers via the Board of Investment to attract foreign direct investment. "We think there should be a more direct subsidy for EV buyers to promote EVs, but we haven't seen the government issue any kind of subsidies like that yet," said Surapong.