GUANGZHOU -- New automobile purchases in China have declined for 13 straight months, raising the specter of the world's largest market contracting by double digits for the first time this year.

For the month of July, auto sales fell by 4.3% on the year, the China Association of Automobile Manufacturers said Monday. Sales have undershot year-earlier figures since July 2018.

"Our revenue has fallen more steeply than last year," said an employee at a Geely dealership in Guangzhou. "It's because the economy is bad."

Geely, formally known as Zhejiang Geely Holding Group, is the parent company of Sweden-based Volvo Cars and also holds stakes in Germany's Daimler as well as Proton in Malaysia. Though Geely is the third-largest automaker in China, the company does not rely on joint ventures with foreign car manufacturers, unlike domestic peers.

But Geely has fallen into hard times. Year-on-year sales have plunged more than 20% for three straight months through July. "The market downturn was worse than anticipated, and the uncertain conditions will continue into the latter half of this year," said a Geely insider.

BYD, the world's largest electric carmaker, is also on the ropes, as unit sales in July dropped 17% from a year earlier. In June, the Chinese government drastically curtailed subsidies for electric vehicles and other so-called new energy vehicles, which sharply undercut the automaker's bread-and-butter EV sales.

General Motors and Volkswagen -- the two market leaders in China -- posted poor performances as well, meaning none of the leading auto manufacturers has escaped the slump.

One of the largest contributing factors are stock prices. Retail investors account for about 80% of China's equity market based on volume. Stock values have come to be seen as an indicator of general consumer appetite. When the benchmark Shanghai Stock Exchange Composite Index falls below 3,000, customers typically put off auto purchases.

This trend closely mirrors the losing streak in the auto market. The Shanghai index dipped below 3,000 in the latter half of June last year, and the market currently hovers around 2,800. 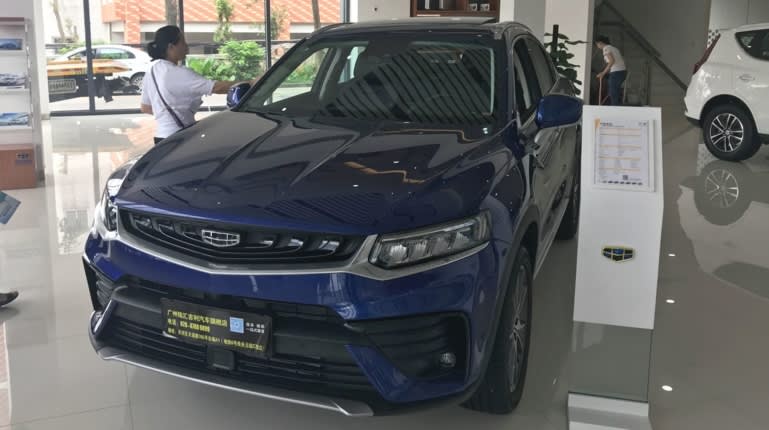 Geely's sales have plunged more than 20% for three straight months and the outloook remains uncertain for the second half of the year. (Photo by Takashi Kawakami)

Speculative real estate investments explain part of the woes as well. The Chinese government is known to loosen restrictions on home loans whenever the economy sours.

"As a result, there is strong pressure to spend on real estate and take on debt, so money doesn't flow into the automobile market, causing a significant impact," said a source from an auto industry group.

The real estate money has made its way into China's inland regions, which have large potential for redevelopment. During the first six months of the year, real estate development investment rose 10.9% on average across the country, according to official statistics, while climbing 15.5% in the western part of China and 12.7% in the northeast.

"The effects of this speculative property investment are huge, and it's in fact the reason why Chinese [auto] manufacturers with a strong inland presence are struggling," said Tang Jin, head of Mizuho Bank's international business relations department.

China's policy decisions have not helped. Starting July 1, about half the country adopted stricter "China Six" emission standards. The rollout came a year earlier than scheduled, despite some pushback surrounding concerns over the auto market already suffering amid the U.S. trade war.

The government had apparently anticipated a surge in demand from those looking to trade-in their old cars for autos that conform to China Six standards. But consumers held back on purchasing, believing that the dealerships lack the full lineup of such vehicles.

EV subsidies have also negatively affected auto sales. The inducements used to be a major contributor to the expanding EV market, but the government decided to cut the subsidies by up to nearly half starting in June.

That move left a large dent in the auto market, leaving many in the industry to question the government's timing in curtailing the financial support.

China is working under a patchwork of competing policy measures affecting the auto industry. Guangdong Province has eased restrictions on issuing license plates for a number of major cities, but the new norms have yet to take hold to the extent of driving auto sales.

Some in the industry are placing hopes on tax breaks for small-engine vehicles. The tax relief was instrumental in boosting sales after the 2008 global financial crisis, and following the stock market crash in 2015.

However, that policy approach tends to cannibalize future demand. In addition, the last tax break lasted until the end of 2017. "Under current conditions, it will be tricky to push forward additional tax relief for small vehicles," said an executive at a Japanese automaker working in China. "The tax breaks have been scattershot, so I wouldn't expect another round to have the intended effect."

Fitch Solutions recently forecast that China's new auto sales for 2019 will shrink by 9%, a downgrade from the original projection of a 4% decline. With vehicle purchases slipping by 11.4% for the January-July period, a double-digit contraction for the full year could become a reality.