An Ora Good Cat compact car is displayed at an auto show in Beijing. The model will be the first fully electric vehicle that Great Wall Motor will launch in Thailand.   © Reuters
APORNRATH PHOONPHONGPHIPHAT, Nikkei staff writerFebruary 17, 2021 17:40 JST | Thailand
CopyCopied

BANGKOK -- Chinese automaker Great Wall Motor will make an official entry into Thailand, Southeast Asia's largest car market, this year with a focus on electrified cars to break the stranglehold of Japanese brands, which together hold nearly 90% of the market share.

Executives of the company met Thai Prime Minister Prayuth Chan-ocha on Monday and told him that Thailand will be an important production base and export hub for the Association of Southeast Asian Nations region, local media reported.

Great Wall has been preparing to enter the Thai market after purchasing a car manufacturing plant in Rayong Province, southeast of Bangkok, from General Motors, which decided in February 2020 to scale back its operations in the Asia-Pacific region. The deal was completed in September, marking the end of GM's presence in the kingdom.

This latest market entry follows SAIC Motor's launch of MG brand cars in Thailand several years ago through a joint venture with the leading Thai conglomerate, Charoen Pokphand Group. This Sino-Thai auto alliance will also be a competitor with Great Wall. At a virtual news conference, Great Wall Motor announced that it will launch four models in Thailand this year, including the Haval H6 sport utility vehicle. (Photo courtesy of the company)

Based in Hebei Province, Great Wall is listed on the Hong Kong and Shanghai stock exchanges, with sport utility vehicles and pickup trucks as its main products. Its annual sales volume hit an all-time high of 1.11 million units in 2020.

The company has announced that it will launch four models this year in Thailand, including the Haval H6 sport utility vehicle and the Ora Good Cat compact electric car. The release dates and prices have not yet been disclosed.

The Haval H6 is a successful SUV that has sold more than 6 million units in China and other countries, according to the company.

Ora Good Cat will be the first fully electric vehicle that Great Wall will launch in Thailand. "It will set a new standard as a high-quality, technology-packed car with appealing retro futurism design for Thai people," the automaker said in a statement. 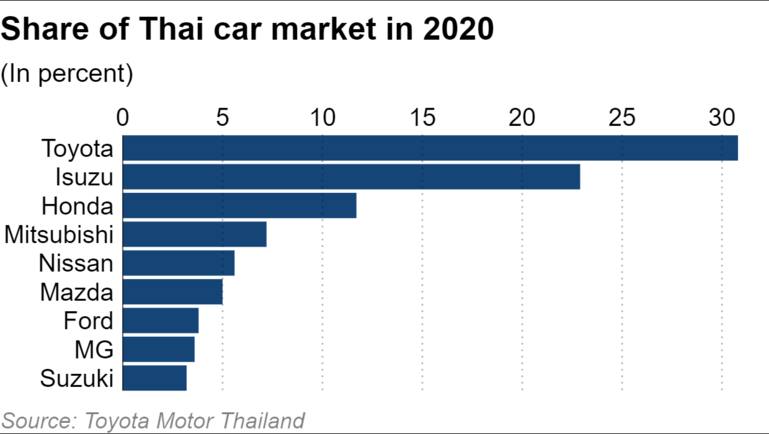 In the past few years, consumer interest in electrified vehicles has been growing in Thailand, and hybrid and plug-in hybrid vehicles are gradually taking root.

Great Wall's strategy is to differentiate itself from existing manufacturers by focusing more on electrified vehicles. It plans to launch a total of nine models in three years. Its lineup "will breathe new life into Thailand's automobile scene with technology and performance that redefine driving enjoyment and value for money towards the future," the automaker said.

That meshes with the Thai government's policy of pushing Thailand toward becoming the EV hub of ASEAN by 2030. The country aims to have EVs make up 30% of the 2.5 million units expected to be produced in 2030.

Standing in Great Wall's way are the Japanese brands, led by Toyota Motor, that have built up a very strong foothold in many ASEAN countries. In the Thai market, which shrank by 21% to about 790,000 units in 2020 due to the COVID-19 pandemic, non-Japanese cars accounted for only 12% of the total.

The SAIC-CP alliance sold about 28,000 MG brand vehicles in 2020, 6.8% more than the previous year, a notable performance amid a difficult sales environment.

Kasikorn Bank's research arm, Kasikorn Research Center, has forecast that the Thai auto market will revive only gradually, expecting sales to grow by 7-11% to between 825,000 and 855,000 units in 2021. Great Wall's entry will create new competition in a market that is still in the midst of recovery.