China's Pony.ai and Baidu pile up self-driving miles in California

Gap with American rivals narrows in road tests, with R&D focus in both countries Pony.ai racked up roughly 281,000 km driven on public roads for the 12 months through November 2019, an 11-fold increase as the startup surged to third place from ninth in 2018, a Nikkei ranking based on California data shows.

Baidu logged a sixfold jump to about 174,000 km, as the search engine company climbed to fourth place from eighth.

These figures do not include road tests conducted by Chinese players in their home market.

Baidu jumped to the top of the pack in terms of disengagement, a metric of how often a human driver intervened to take control of the vehicles. The company reported just six disengagement cases during the period, or once every 29,000 km.

Waymo's disengagements occurred once per roughly 21,000 km, an improvement of 20% from the prior year. Cruise cars drove about 19,000 km before a human disengaged, more than double the company's 2018 distance.

AutoX, Pony.ai and Didi ranked fourth, fifth and eighth, respectively, in this category, showing a rise among Chinese companies. But the disengagement data cannot be used for direct comparison, considering the differences in safety policies and driving conditions among the companies.

Pony.ai and Baidu share the strategy of creating a research and development framework in the U.S. and China, the two biggest markets.

Pony.ai was founded in 2016 by Google and Baidu alumni including its CEO, James Peng. The company has a California R&D site in its home city of Fremont and another at its current base of Guangzhou, with a recruiting focus on artificial intelligence engineers.

Testing on public roads in both markets, the company said it has driven over 1.5 million kilometers as of the end of 2019. Pony.ai grabbed headlines in February after snaring $400 million from Toyota Motor in its latest fundraising, which boosted the startup's valuation to several billion dollars.

Baidu has development centers for autonomous driving in places such as Beijing and another Silicon Valley city, Sunnyvale. The search engine company logged about 754,000 km on public roads around the Chinese capital in 2019, roughly seven times the distance of second-ranked Pony.ai.

Baidu leads the Apollo open-source platform, which partner companies such as Toyota, Honda Motor and Ford Motor can use to develop their own autonomous-driving technologies.

Some of these Chinese players eventually may enter services based on autonomous cars in the U.S., predicts Egil Juliussen of research firm IHS Markit.

But Chinese companies and their American counterparts differ in focus. Cruise and Waymo target city driving, with fleets of 228 and 148 test vehicles, respectively, registered in California. Pony.ai runs testing with just 22 such vehicles and Baidu a mere four. 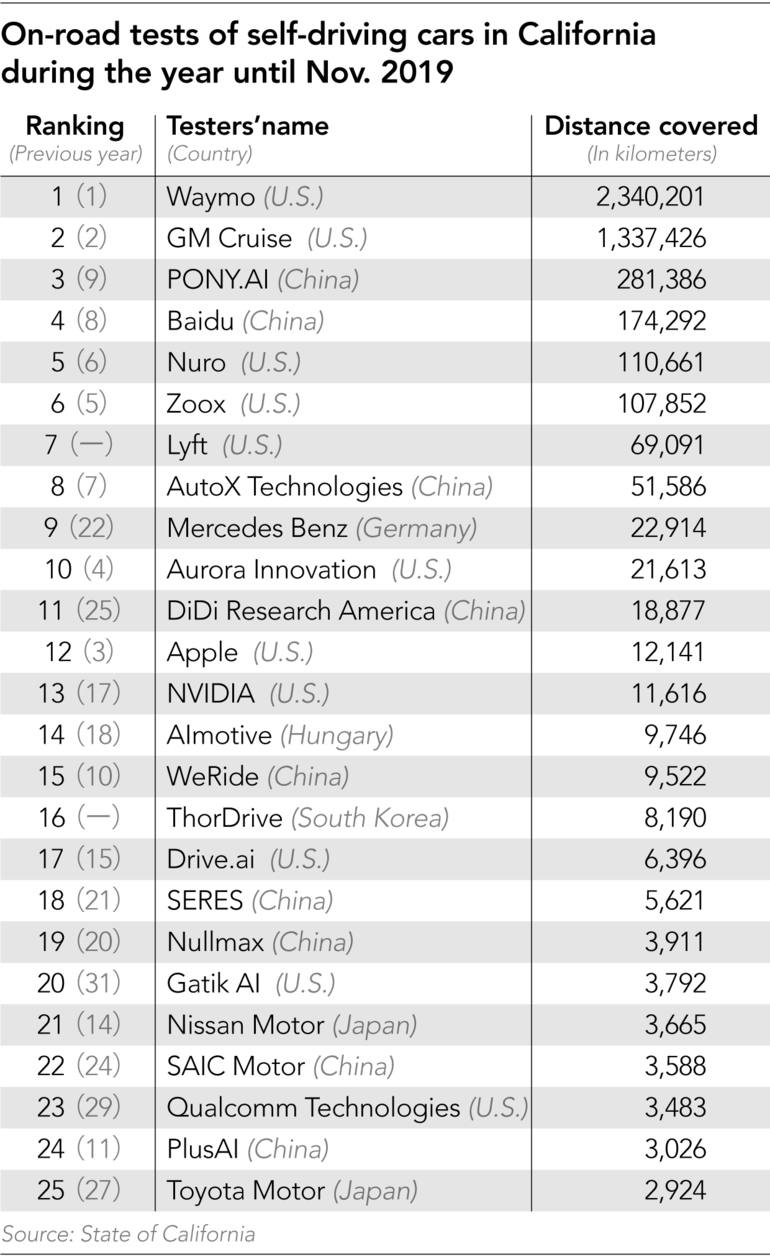