TOKYO -- Chinese electric vehicle startup, Xpeng Motors, has become the first automaker to adopt an artificial intelligence microchip for autonomous driving developed by U.S. tech company Nvidia, putting it ahead of industry giants such as Toyota Motor and Volvo Cars.

"Xpeng is helping usher in this new era of transportation with the AI-powered P7," Danny Shapiro, Nvidia senior director who heads the automotive division, wrote in a blog.

The tie-up between Xpeng and Nvidia points to a changing order in the automobile industry. In the past, the newest technologies were always adopted first by European automakers before their Chinese counterparts would follow. Now, those cutting-edge technologies are being introduced in China first.

There are several reasons for such a change. For one, Chinese consumers have become more demanding and want to enjoy the newest functions, said a local executive at a Japanese automaker. The executive said Chinese consumers show a strong interest in new technologies, including self-driving functions and connectivity.

The Chinese government is also keen to nurture the development of such technologies. Beijing has helped to develop cars with "Level 3" self-driving functions and had hoped to commercialize such cars by 2020. It has already approved road-testing for these vehicles. Self-driving technologies are ranked on five levels. Level 3 refers to longer self-driving capability than lower levels but these cars still require a driver onboard. 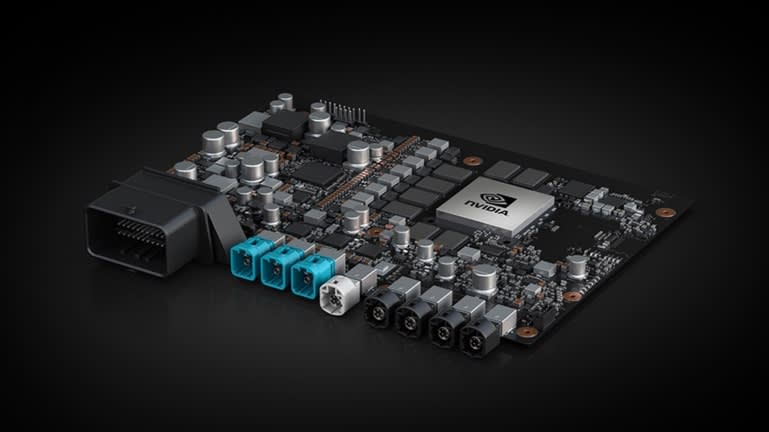 Nvidia's in-vehicle computer used in the P7 sedan claims to be able to perform 30 trillion operations per second but yet only consumes 30 watts of power. (Photo courtesy of Xpeng Motors)

The government said in May that commercialization of those vehicles was now pushed back by five years due to the coronavirus outbreak, but it remains committed to promoting self-driving cars.

Another reason for the change in the global industry is that Chinese automakers are focusing more on developing overseas markets. Chinese electric vehicle startups, in particular, are eager to challenge competitors such as Tesla on the world stage.

"We don't intend to expand our business by depending [only] on domestic demand in China," said the chief executive of a Chinese EV maker. "We will grow in the global market while contesting head-on with Tesla."

Such industry changes were already happening in 2017 when NIO, a Chinese EV startup, became the first in the world to adopt Israeli company Mobileye's EyeQ4 vision processor for autonomous driving and advanced driver assistance systems. Until then, Mobileye had provided its products to European automakers first.

For Xpeng Motors, Nvidia's DRIVE AGX Xavier will allow its cars to record and process more information. The car employs 14 cameras, five millimeter-wave radars and 12 ultrasonic sensors to ensure that it knows its surroundings.

"DRIVE AGX Xavier, which has a high processing capacity, was needed for the car to process large amounts of sensor data," said an engineer in charge of development at Xpeng Motors.

Nvidia's in-vehicle computer used in the P7 sedan claims to be able to perform 30 trillion operations per second but yet only consumes 30 watts of power. It is also able to update software wirelessly.

While mass production of the P7 at its plant in Zhaoqing, Guangdong Province, has begun, Xpeng Motors is already "developing a next-generation EV with higher autonomous driving functions in collaboration with Nvidia," said Wu Xinzhou, vice president of autonomous driving.

Xpeng Motors has not revealed details of that vehicle, but it is likely to use Nvidia's next-generation in-vehicle computer, DRIVE AGX Orin, as the brain for self-driving functions. That computer will have processing performance seven times higher than that of Xavier, according to Nvidia's Shapiro.

Nvidia plans to start shipping Orin samples in 2021. Shapiro said Orin would be installed in vehicles from around end-2022 at the earliest. Given close ties between the two companies, it would not be surprising if Xpeng Motors becomes the world's first company to adopt Orin.

Yet, such collaboration could abruptly be broken off by worsening relations between the the U.S. and China. U.S. policymakers could demand that American technologies be reserved for domestic manufacturers.

Nvidia's reliance on Taiwan Semiconductor Manufacturing Co., the world's largest contract chipmaker, could also throw a spanner in the works. Like China's Huawei Technologies, which has been sanctioned by the U.S., Nvidia has entrusted the production of its microchips to TSMC. It plans to use TSMC's 7-nanometer processing capabilities for its Orin.

TSMC has announced plans to build a new factory in the U.S., but production there will only begin in 2024, too late for the planned mass manufacture of Orin.