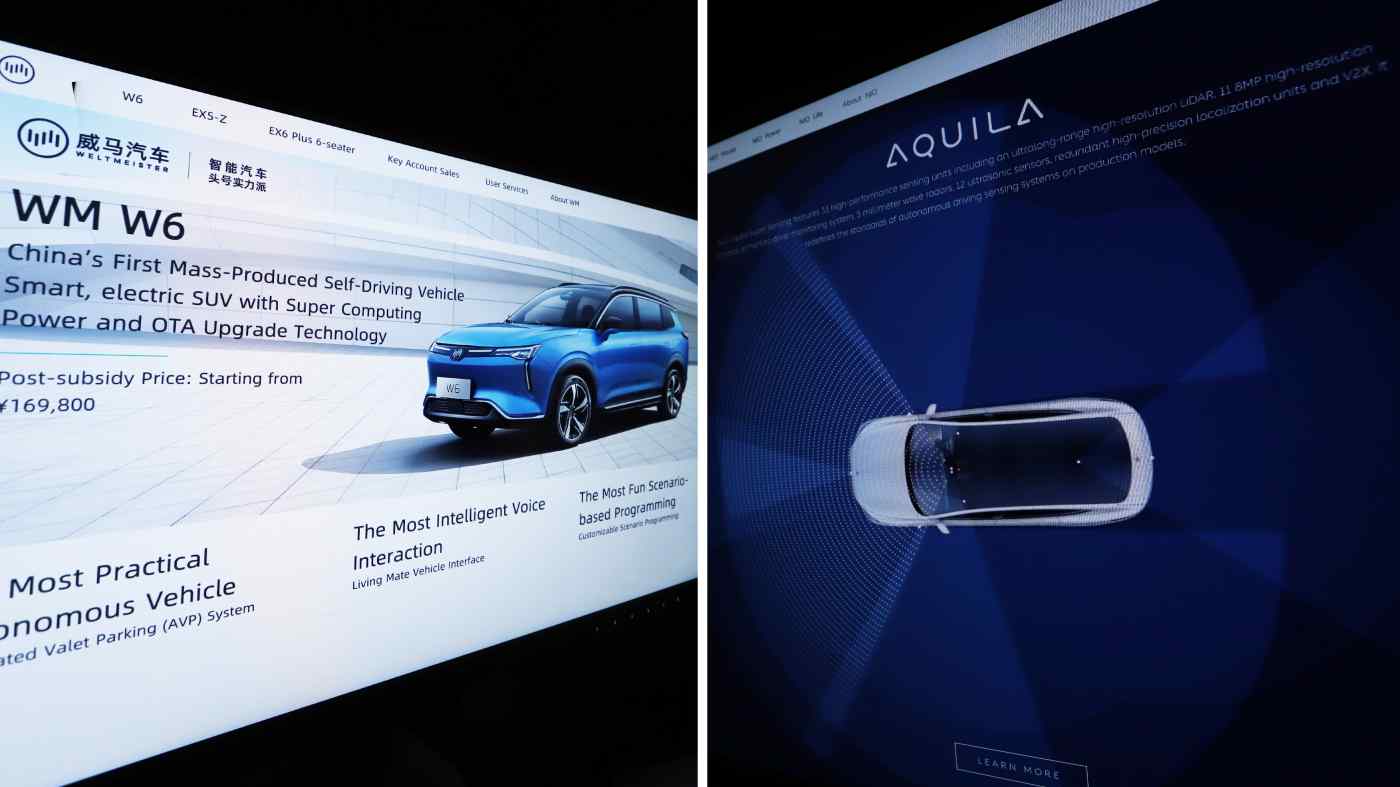 Experts have called on the auto industry and media to only use a set of standardized and straightforward terms to describe vehicles' automation ability, in order to avoid misunderstanding. (Source photos by Yuki Kohara)
NIKKI SUN, Nikkei staff writerAugust 29, 2021 12:25 JST | China
CopyCopied

HONG KONG -- Drivers, auto company executives and academics in China are calling for clearer industry standards in the marketing of vehicles with driver assist functions, after a fatal accident involving the technology sparked a new round of concern over whether motorists are being misled about its capabilities.

They say the imprecise, sometimes misleading, claims made by some car manufacturers and their salespeople are inducing many to believe it is safe to let the machine steer the vehicle without paying attention, when even the most advanced passenger car currently available is far from achieving that level of autonomy.

"Many consumers in China are fascinated by autonomous driving technology. Some could be overly confident about the ability cars can achieve today," Cui Dongshu, secretary-general of the China Passenger Car Association, told an industry research group.

More than two weeks after a 31-year-old entrepreneur in Hanjiang was killed driving a Nio SUV in the driver assist mode known as "Navigation on Pilot," the carmaker is still dealing with fallout from the crash.

On Monday it pushed a six-minute tutorial video on how to use the pilot function through its app to more than 100,000 users. It also asked drivers to take a non-compulsory quiz with 10 questions. Both emphasize that the feature does not equal autonomous driving and the driver should remain alert throughout the journey.

Nio's New York-listed shares, which fell in the wake of the accident and following an outcry on social media, have yet to recover to their early August level.

Often referred to as "autopilot" or some variation of this, the driver assist mode has been made available on most cars launched by Chinese electric vehicle startups. In addition to controlling the speed of the vehicle automatically, the function also allows the car to steer, accelerate and brake within its own lanes. However, some brands and social media influencers often confuse this mode with the more advanced "autonomous driving", which completely frees the motorist from driving.

For example, Nio describes the function as "automatic driver assist" in its sales materials, while Xpeng Motors called its version "autonomous driving assist." WM Motor boasts that its W6 SUV is "China's first mass-produced self-driving vehicle" -- simply because the car can park itself. Tesla sells cars with "full self-driving capability" according to its Chinese website, even though current law forbids the production of self-driving vehicles in China.

"The use of sales language should be better guided and regulated," Cui said.

Xpeng Motors quietly replaced the phrase "autonomous driving" with "intelligent driver assist" on its website following the Nio controversy, according to a Nikkei analysis using the digital archive platform The Wayback Machine.

"There is no common definition of what autopilot means and that is a problem," said Egil Juliussen, a columnist and former automotive technology analyst for research company IHS Markit. Many people are misusing the function because "autopilot cannot pilot the car automatically," he said.

Similar controversies have blown up around the world. In the U.S., two lawmakers -- Senators Richard Blumenthal and Edward Markey -- last week called for a Federal Trade Commission investigation of Tesla. They said that "Tesla's marketing has repeatedly overstated the capabilities of its vehicles, and these statements increasingly pose a threat to motorists and other users of the road."

The U.S. classifies the levels of vehicle automation from 0 to 5, which would put autopilot in the category of level 2 -- meaning it works only in very limited conditions, and drivers are still obligated to supervise and retake control quickly, Juliussen said. China adopts a similar 0-to-5 system.

Li Xiang, founder of Chinese EV startup Li Auto called on the auto industry and media to only use a set of standardized and straightforward terms -- instead of industry jargon -- to describe the vehicles' automation ability to avoid misunderstanding.

"By exercising restraint on marketing and investing in technology, we benefit the users, ourselves, and the industry in the long run," he said. Li Auto also recently removed the word "advanced" from its website in the section introducing its driver assist function.

"The maturity of a technology requires constant improvements. It's very important and necessary [for users] to correctly understand the capability of the technology at present," Fu Qiang, founder and chief executive at Chinese EV startup Aiways said in a post on the social media platform Weibo.

While most EV brands state clearly in their manual that autopilot features still require active driver supervision, many drivers debating the Nio crash complained that they have been given the wrong impression by sales staff. Nio owner "Zhou Yuhui" posted on the company's app last week that he was tricked into buying the car because a salesperson told him it would support level 4 autonomous driving.

By coincidence, China's Ministry of Industry and Information Technology issued new regulations on the same day as the Nio crash, governing vehicles with driver assist functions. While focused heavily on cybersecurity, the rules also require manufacturers to clearly inform buyers of a vehicle's capabilities and limitations, and the responsibility of drivers. Technological measures should be also be adopted to make sure drivers do not take their hands off steering wheels, the regulations state. A draft of the new rules had been published in April.

"The document provides very important guidelines for the development and compliant operations of autonomous driving," said Ding Heng, a partner with Chinese law firm Zhong Lun, but he said that descriptions of the different levels of functionality still needed to be given legal clarification.

"It's still very difficult to decide whether the claims made by brands have exaggerated the functions because we don't have any authority to certify a vehicle's automation level, or related legal judgment for reference."