AutoX says it will focus on cracking the Chinese self-driving taxi market ahead of the U.S. one. Photo courtesy of AutoX)
CK TAN and NIKKI SUN, Nikkei staff writersApril 21, 2020 18:15 JST | China
CopyCopied

SHANGHAI/HONG KONG -- Chinese automated driving startup AutoX has one foot in its home market and one in the U.S., but its priorities are clear cut.

"Our goal is to win the China market first," Jewel Li, chief operating officer of the Shenzhen-based startup told the Nikkei Asian Review in an interview.

To help reach that goal, AutoX opened its robotaxi operations center in Shanghai this month, and is preparing to deploy 100 autonomous vehicles in the Jiading District by June as part of a joint trial with the local government.

The startup is just one of several Chinese companies that have advanced to the stage where they can offer self-driving taxi services to the public. Internet search engine Baidu rolled out a fleet of 45 robotaxis in the central Chinese city of Changsha last September and then expanded the service to Beijing and Cangzhou in Hebei Province, while startup Pony.ai expanded its fleet overseas last year.

And while many of these players are also conducting research and testing overseas, particularly in the U.S., their best bet for early commercialization may be in China, which offers dense urban populations and friendly government policies.

A coming regulatory overhaul could provide a further boost for the industry.

Until now, China has relied on self-driving standards compiled by SAE International, a U.S. body. But starting in 2021, the country will adopt its own Automotive Driving Automation Classifications, paving the way for domestically set guidelines that industry players hope will drive large-scale development of autonomous driving technology and mass production of vehicles.

This is potentially good news for the likes of AutoX, which has already clocked over 100,000 trial hours on public roads in 12 cities around the world since its founding in 2017.

With an investment amounting to "tens of millions of U.S dollars," the Shanghai facility will also serve as a big data center with simulation cloud computers, which are crucial for operating artificial intelligence-powered vehicles.

When the trial in Shanghai starts, users will be able to hail a ride via mobile app for one of AutoX's Ford hybrid robotaxis that come equipped with sensors linked to an embedded computer. The cars will be controlled by a "safety driver" under current regulations.

Although AutoX also has a research and development operation in the U.S., Li said China is the priority for its deployment of robotaxis due to the potentially huge market for autonomous driving technologies.

"The urban lifestyle of the majority of the Chinese population is another great motivation," Li explained, adding that it is difficult for ride-hailing and taxi services in suburban areas to become profitable.

"By focusing on the China market, AutoX seems to acknowledge the commercialization for robotaxis is much faster than the U.S., possibly in the next 18 months as the Chinese government formalizes policies," said Tu Le, managing director of Sino Auto Insights, a Beijing advisory firm.

At the same time, AutoX wanted to avoid the high barrier in the U.S. market, which is dominated by established players such as Alphabet's Waymo and GM's Cruise, Tu added.

The Chinese government in February issued a blueprint for the development of intelligent vehicles, aiming to achieve mass production and commercialization of high-level autonomous vehicles by 2025. Policy papers like this reflect the government's commitment to advancing its automotive industry, ushering local players along.

Startups already have plenty of miles under their tires. Guangzhou-based WeRide clocked over 8,396 rides in December alone, ferrying 4,683 passengers who hailed its robotaxi through a mobile app. The trial in partnership with state-owned Baiyun Taxi Group, the largest taxi company in southern China, involved a fleet of 40 vehicles that covered 100 fixed pick-up and drop-off spots within a 144.6 sq. km area of designated public roads.

WeRide has resumed services late last month after a brief interruption during the coronavirus outbreak early this year.

Baidu, known for its self-driving vehicle platform Apollo, does not disclose the number of rides it has completed, but the internet giant is believed to be one of the most resource-rich players in high technology development. The Beijing-based group has recruited more than 100 partners, including Toyota, Honda Motor and Ford Motor, for the development of Apollo.

And after expanding its trials last year, Baidu recently won a 52.8 million yuan ($7.5 million) contract to build an open test circuit for autonomous driving in Chongqing for western China.

The race to test robotaxis is expected to intensify as Didi Chuxing, China's largest ride-hailing company prepares to enter fray. The company announced last August that it will launch a robotaxi fleet of about 30 cars in Shanghai, though it did not specify when.

"We hope to launch the pilot service as soon as possible," said a Didi spokesperson.

Established players such as Changan Automobile announced Uni-T sedan last month, launching what the state-owned automaker touted as the first mass production of Level 3 autonomous driving technology. Self-driving vehicles are categorized between 0 and 5 levels, with highest being driverless. Level 3 tech means a car can cruise on its own with little human intervention when certain operating conditions are met.

This announcement came as vehicles sales in China, already on a downward trajectory since last year, fell 42% to 3.7 million units in the first quarter of 2020, according to the China Association of Automobile Manufacturers. Sales of new energy vehicles, a sub-category within passenger cars that includes most autonomous vehicles, plunged 56.4% even as the government postponed eliminating subsidies until 2022, instead of the end of 2020. 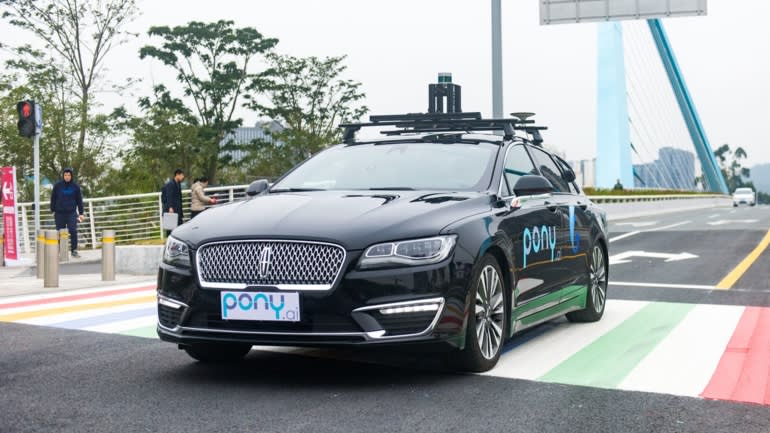 The ongoing COVID-19 pandemic could complicate the development of the industry further, especially funding and operational constraints. But some like AutoX appear to be safe for now. The startup raised "tens of millions U.S. dollars," last year according to local tech media outlet 36Kr."We indeed consider it to be very well-timed that we finished our Series pre-B right before the COVID-19 outbreak," Li said without disclosing the amount. "This certainly provides us with enough runway and continues powering our rapid growth regardless of COVID-19."

Pony.ai, founded by former Baidu and Google engineers, received $400 million in fresh funds from Japanese automaker Toyota last month, pushing its valuation to $3 billion. It has expanded its 100-vehicle fleet overseas, including a robotaxi service in California in partnership with Hyundai Motor late last year. So far, it has completed more than 100,000 rides globally, a company spokesperson said.

In the case of AutoX, which maintains separate sets of test data for China and the U.S., funding needs could be particularly acute, Sino's Tu said. "I can see how keeping data separate by country could be prudent from a regulatory perspective. ... But this means AutoX or any other autonomous vehicle startup would need to investment heavily in two separate regions, which could ultimately make them much less competitive in their primary and secondary launch markets.

"We know that additional investment is necessary to build a successful system. So [the question is] how will investors react to where and how capital is being invested."